Police in Howard County increased the reward for information about the shooting death of a woman and her baby, who died about a week later.
Listen now to WTOP News WTOP.com | Alexa | Google Home | WTOP App | 103.5 FM

Police in Maryland’s Howard County have increased the reward for information about the shooting death of a woman and her baby, who died about a week later.

The reward in the killing of Rabiah and Ahja Ahmad has been increased to $15,000, the police said in a statement Thursday.

Several shots were fired from outside into a house in the 6600 block of Dovecote Drive, between Freetown Road and Martin Road in Columbia, at about 11 p.m. July 31.

Rabiah Ahmad, 30, was shot once and died; no one else in the house, where she had been staying for a few months after recently moving to Maryland, was hit. She died later at a hospital.

She was 28 weeks pregnant when she was shot; doctors delivered her daughter, Ahja, but she was in critical condition until she died Aug. 5.

The police are asking anyone with more information to call them at 410-313-STOP or email HCPDCrimeTips@howardcountymd.gov. You don’t have to give your name.

Ahmad was Muslim, and the shooting happened during the Muslim holiday of Eid al-Adha. The Council of American-Islamic Relations is offering a $5,000 reward of its own.

The police said they don’t have any evidence so far that the killing was motivated by prejudice. 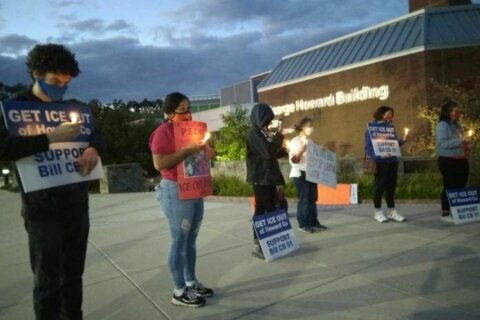