Terrence Massey Jr., 21, of Annapolis, and a 15-year-old from Glen Burnie are also facing charges in Howard County for the June 12 burglary of Fox Firearms. A stolen van was used to crash through the storefront around 2 a.m., police said, which was similar to what happened to United Gun Shop in Rockville just a day later.

“Massey is charged with multiple counts of burglary, destruction of property, auto theft — because the van that they used to crash into the building was stolen — reckless endangerment and some handgun violations,” said Howard County police spokeswoman Sherry Llewellyn.

Massey and the teen were first charged in Montgomery County, a day after the June 13 burglary in Rockville. In that case, a third suspect, 17-year-old Brandon Allen Jackson, was also arrested and charged, as an adult. A fourth suspect, 17-year-old Marquis Weems, was shot and killed when police were responding to the burglary.

Jackson has not been charged in Howard County, but “the investigation is ongoing,” Llewellyn said.

Massey is being held without bond; the teen is in a juvenile detention facility.

“Eighteen weapons were stolen from the gun store in Howard County. During the course of the investigation working with Montgomery County, four of those guns were recovered, so 14 of them still are unaccounted for,” Llewellyn said Monday afternoon.

Also, as of Monday afternoon, 10 firearms stolen from the Rockville gun store were still missing. 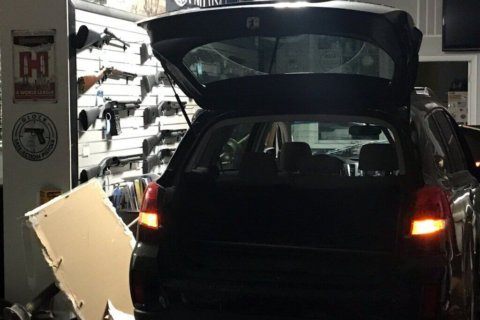