Coronavirus News: Fairfax Co. votes to increase substitute teacher pay | Is it time to get a COVID-19 booster? Which one? | Local cases of COVID-19 | How many in DC region are vaccinated?
Home » Montgomery County, MD News » 4 suspects at large… 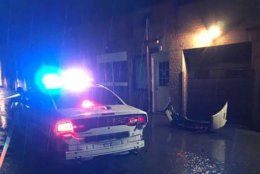 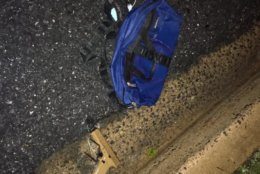 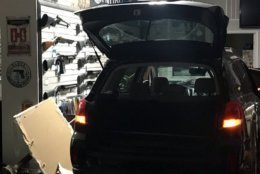 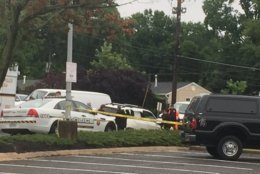 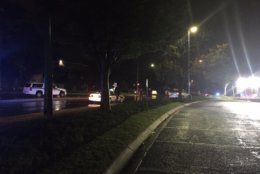 Four suspects are on the loose and one suspect is dead after a burglary at a Rockville, Maryland, gun store early Thursday, Montgomery County police said.

As there are four possibly armed suspects on the loose, police are urging local residents to navigate the area with extra caution.

An alarm went off at the United Gun Shop at the intersection of Randolph Road and Parklawn Drive around 2:30 a.m. Thursday, police said.

The five suspects rammed into a police cruiser as they were fleeing the scene, causing police to shoot at the car, officials said. Police later found the car a few blocks away from the area with a dead man inside.

Police said they found a bag with multiple firearms inside in a backyard not far from the scene. Three other guns were found outside the car the suspects tried to get away in.

It appears two vehicles reported stolen out of Anne Arundel County were used in the incident: one to ram the storefront and a getaway car.

Later Thursday, police said an officer that had responded to the burglary in progress opened fire on the suspects as they were making their escape, ramming into his cruiser. The suspect who was found dead inside the vehicle had a gunshot wound.

The officer who had opened fire is on administrative leave pending review, police said.

Eastbound Randolph Road between Parklawn Drive and Putnam Road was shutdown as police investigated the incident, but reopened before 11 a.m.

WTOP’s John Domen, who was on the scene, reported that police were advising residents that if something seemed “off” in a yard or house to call police immediately.

A wild scene in Rockville, where 5 people rob a gun store, ramming a police car as they flee. The officer shoots at the car, and a few blocks later the car is found with one dead man inside. 4 ppl still on loose, likely armed, police scouring area of Loehmann’s Plaza. More @WTOP pic.twitter.com/jJWyWI0Gbl

Another gun store in the Maple Lawn section of Laurel was burglarized in a very similar way Wednesday morning, though it is unknown if the two incidents are connected.

Howard County police said officers responded to Fox Firearms at 2 a.m., where unknown suspects gained entry to the shop by driving a stolen vehicle through the front of the store, escaping with several guns. A county police spokesperson said so far “there has been no determination made” about whether the Howard County case is connected to the Montgomery County case.

This isn’t the first time United Gun Shop in Rockville has been burglarized. In 2017, multiple guns were stolen early on a Thursday morning, after suspects forced open the front door and took several handguns and long guns.