As torrential rains fell, what is normally a quiet stream along an old trolley line, was transformed into a raging river, pushing cars down the hill in front of homes and pulling front yards down the street.
Listen now to WTOP News WTOP.com | Alexa | Google Home | WTOP App | 103.5 FM

ELLICOTT CITY, Md. — Her mailing address reads “Ellicott City,” but for longtime resident Hollis Karr, the devastating May 27 flood made it clear some of the benefits depend upon which side of the Patapsco River one lives on.

A one-minute walk from the bridge, for the 21 years she’s lived in the 3000 block of Westchester Avenue, in Baltimore County, Karr has enjoyed her proximity to Main Street in the historic district, located in Howard County.

As torrential rains fell, what is normally a quiet stream along an old trolley line, was transformed into a raging river, pushing cars down the hill in front of her home, and pulling her front yard — and the front yards of her neighbors — down the street.

In many cases the floodwaters washed away the concrete, rock, and earthen foundations of the homes on Westchester Avenue, many which were built in the late 1800s or early 1900s.

Yet, on the day Howard County reopened two-way traffic on either end of Main Street, while the most severely flood-damaged stretch is restricted for residents, business and property owners, Karr said her requests for help from Baltimore County have resulted in little assistance.

“The road is hot patched, we have no help for the sidewalk, they wouldn’t bring over any stone,” Karr said. “I begged — just bring two trucks of stone and help us out here — they wouldn’t do that.” 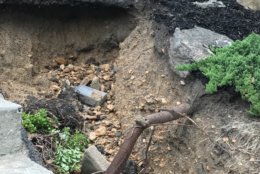 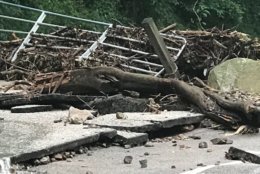 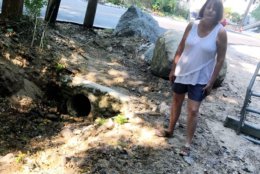 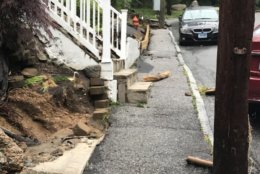 When she moved to the location, the major flood concern was the Patapsco River, rising over its banks.

However, in the 2016 flooding, and more severely in the 2018 flooding, the quiet stream inflated with more than 7 inches of rainfall overwhelmed the metal culvert — approximately 16 inches in diameter — which is tasked with carrying water from the stream into underground pipes.

Instead of flowing into the culvert, flood waters from the stream flowed over Karr’s property, removing tons of dirt and leaving her driveway resembling a cliff.

“It’s too small to contain the amount of water coming downhill,” Karr said of the culvert.

Yet, Baltimore officials have told her addressing the undersized culvert is not in the current capital budget, and the process to secure funding would begin in October.

“I’m frightened for our homes, and our lives, and our property,” said Karr. “This isn’t like a pet project, like we’re asking for speed bumps.”

While continuing to deal with Baltimore County agencies, Karr said she would like to see Howard County include her neighborhood in its rehabilitation.

“We are part of Ellicott City. The people who live on this side of the bridge support all the shop owners, vendors, and restaurants in downtown Ellicott City. We support fundraisers for them. We’ve helped them recover.”

A parking lot behind Karr’s home is technically in Baltimore County, but is maintained by Howard County, because of its proximity to Main Street.

“I think the feeling is that we’re only part of the community when Howard County wants to reach over and grab for Main Street,” Karr said.