WASHINGTON — Residents and business owners in downtown Ellicott City, Maryland, were allowed to retrieve valuables and other items Tuesday on the second day of flooding cleanup.

Most debris has been moved from Main Street, Howard County Public Works Director Jim Irvin said at a news conference Tuesday updating the public on their efforts. In addition, water lines have been repaired and a sewer line overflow has been fixed.

Another big part of the cleanup — removing the cars that had been swept up by floodwaters — is almost completed. Howard County Police Chief Gary Gardner said 188 have been recovered, and 10 more await in waterways.

The county has released some audio from those calls. Hear it below.

About 225 trips (of 1 to 2 workers each) were made into the restricted flood-damaged area Tuesday, County Executive Allan Kittleman said.

This initial progress was clouded by the discovery of a Severn, Maryland, man who had gone missing Sunday while trying to help a woman stranded amid rising waters. Eddison Hermond’s body was discovered Tuesday morning in the Patapsco River, roughly a mile from the bridge at the bottom of Main Street.

Sunday’s flood has been regarded as worse than the one that killed two on July 30, 2016. Up to 8 inches fell Sunday in a matter of hours. Its damage left those who had rebuilt less than two years later weighing whether they should do so again.

Potentially complicating these early cleanup efforts: more rain. Thunderstorms are in the D.C.-area forecast from Wednesday through Saturday, and Kittleman said officials are looking out for potential trouble spots around the area.

“We certainly are looking over that very carefully with the National Weather Service,” he said.

The county executive also pointed out that while doing the necessary work to prevent another disaster can take 10 years, officials had done what they could, such as cleaning out stream channels.

“There are a lot of things that were being done, things that already have been done,” Kittleman said.

Announcements for those affected 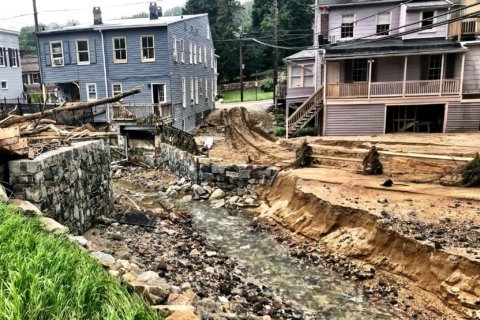 How Ellicott City will rebuild