A bill that would make Howard County, Maryland, a "sanctuary" county for people who have entered the country illegally was approved Monday night by county council. But for supporters, it's likely a short-lived victory.
Listen now to WTOP News WTOP.com | Alexa | Google Home | WTOP App | 103.5 FM

WASHINGTON — A bill that would make Howard County, Maryland, a “sanctuary” county for people who have entered the country illegally was approved Monday night by county council. But for supporters, it’s likely a short-lived victory.

The bill passed 3 to 2, but a veto is expected from County Executive Allan Kittleman who has said in a statement that the plan would get in the way of efforts to keep the county safe and endanger the county’s federal funding for other services.

“CB-9 has elicited more testimony, emails, tweets and public comment than any other issue I’ve encountered during my tenure in office, and I imagine the same is true of my colleagues,” said Council member Jon Weinstein before voting against the bill.

The plan would, among other things, instruct county police not to question people about their immigration status.

“This is the right side of history and I’m so pleased and I’m so proud to be voting ‘yes’ tonight,” said co-sponsor Jennifer Terrasa.

Her vote was followed by applause from many in the large crowd. In the audience, many supporters of the plan showed up wearing green T-shirts, while opponents wore red.

Another “yes” vote came from co-sponsor Calvin Ball. “I greatly appreciate so many of you for standing up and speaking up for our friends, our neighbors and many who go to school with our children,” Ball said.

Council member Greg Fox said plenty of laws and programs are already in place to help those who have entered the country illegally. “I’ve seen nothing that demonstrates that need for additional protections,” Fox said before voting “no.” 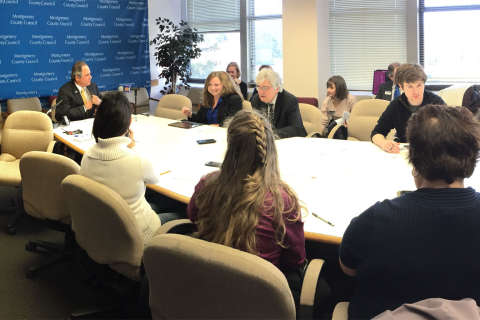