Saturday is National Prescription Drug Take Back Day, and this year it’s happening during a surge in opioid deaths.

Disposing of old prescription drugs is all the more important because they have been linked to the use of heroin. The National Institute on Drug Abuse reported that “a study of young, urban injection drug users interviewed in 2008 and 2009 found that 86 percent had used opioid pain relievers nonmedically prior to using heroin, and their initiation into nonmedical use was characterized by three main sources of opioids: family, friends, or personal prescriptions.”

Nationwide, drug overdoses have likely already surpassed 100,000 this year in America — a nearly 30% increase over the previous year — according to new analysis by Drug Helpline.

After smoking pot, the second-most common form of drug abuse in America is nonmedical use of prescription drugs.

Since its inception more than a decade ago, Drug Take Back Day has removed more than 7,000 tons of medication from circulation.

For people who are interested, but unable to participate in Drug Take Back Day on Saturday, there are permanent lockboxes for old medications  regionwide at some police stations, hospitals and drugstores.

You can find those lockbox locations and participating Drug Take Back Day sites by ZIP code on the Drug Enforcement Administration website.

“Over the pandemic we have seen a sharp increase in overdose deaths, and the path to opioid abuse can begin in the home with unused prescription drugs,” said U.S. Attorney for Maryland Erek L. Barron in a news release. “Proper disposal of unused and unneeded prescription drugs will help prevent drug abuse and opioid addiction.”

Drug Take Back Day is free and anonymous; no questions asked. But participants should know what will and won’t be collected.

Not welcome, according to the new release, are liquids, including intravenous solutions, syringes and other sharps items, as well as illegal drugs.

Items that will be collected include tablets, capsules, patches and other solid forms, as well as vape pens or other e-cigarette devices but only after the batteries are removed from the devices.

“If the battery cannot be removed, individual consumers can check with large electronic chain stores who may accept the vape pen or e-cigarette devices for proper disposal,” the release states.

According to D.C. police, over 800,000 pounds of pharmaceuticals were surrendered in April 2021, during another national push for people to turnover unused prescription drugs.

For tips on safely disposing of drugs at home, people can find advice from the U.S. Food and Drug Administration and the Environmental Protection Agency.

Below are some drop-off sites in the D.C. area for Drug Take Back Day, which takes place Saturday from 10 a.m. to 2 p.m. For a complete list by zip code, click here. 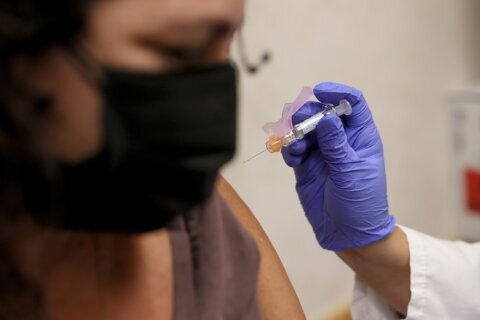