What if I said the wrong thing? How will I ever finish the assignment in time? Why aren’t they responding to my text? Thoughts like these make us human, says Julie Pike, a clinical psychologist in Chapel Hill, North Carolina. “That’s what the brain is designed to do — to think our way out of problems and away from predators,” she says.

“However, we often find ourselves stuck in a spiral of predicting, playing out different scenarios and often catastrophizing,” says Sophie Lazarus, a psychologist at the Ohio State University Wexner Medical Center in Columbus.

“As strange as it sounds, in the short term, this overthinking can give us a false sense of relief or the illusion of control. However, in the long term, this habit can have real costs to our well-being and engagement in our lives,” she notes.

Those consequences can compound over time, adds Linda Sapadin, a clinical psychologist in Long Island, New York. “Overthinking can ruin your day and also ruin your sleep cycle.”

Before that happens, try these 12 expert-approved tactics to stop your unproductive thoughts in their tracks.

But if you can learn to recognize the physical sensations that come with stress — maybe tension in your back or a pit in your stomach — then you can work on halting the mental causes behind them. “Make a commitment to use a tool to help your brain step back,” Pike says. The following slides offer examples of tools you can use to stop anxious overthinking in its tracks.

2. Observe rather than chastise

One such tool is calling out your thoughts as just that — thoughts. For instance, turn “I’m a bad parent” into, “I notice I’m thinking I’m a bad parent.”

“Step back and observe your thoughts rather than believing your thoughts are facts,” Pike says. This mental reframing adds a layer of distance between your identity and your thoughts and separates them as beliefs that can be changed.

This helps provide some sense of control when it might otherwise be hard to feel like you have any. “Telling someone to stop doing something is not as helpful as encouraging them to do something else,” says Dr. Ernest Rasyidi, a psychiatrist with St. Joseph Hospital in Orange County, California. “Instead of emphasizing the attempt to stop worrying, the focus gets put on trying to do positive manageable things.”

“Many people who suffer from anxiety suffer in silence alone, because they recognize that their concerns may be unreasonable but they just cannot turn them off,” Rasyidi adds. “Validating the suffering that these people go through is one of the first steps to healing. After that, I often engage the patient in trying to help put together a solution that works for them.”

When you notice that you’re overthinking or feeling anxious, Lazarus recommends asking yourself why you’re worrying about a particular problem. Is it a problem you can act on or solve, or are you trying to control the uncontrollable?

The answer can help you see a path forward. “If you find yourself trying to control the uncontrollable, be kind to yourself. This is a very human impulse,” Lazarus says.

While “acknowledging that we just can’t control some things is hard,” it can lead you to alternative courses of action that can help calm you. “Try doing something soothing or productive — take a shower, go for a walk or talk to a friend,” she says. Or engage in relaxation exercises, like diaphragmatic breathing or progressive muscle relaxation, which “can also be helpful in calming down the body and mind.”

Overthinking is like a book with no periods, paragraphs or chapters — it doesn’t know when to stop, says Sapadin, author of the book “Overcoming Your Procrastination: Advice for 6 Personality Styles.” It’s up to you to set those boundaries.

To do so, tell yourself — ideally aloud — “just another 10 minutes” with the nurturing, not punishing, tone of a parent, Sapadin suggests.

Rasyidi agrees that giving yourself some designated “worry time” can be more helpful than trying to stop overthinking at all. He says he often instructs patients to “actually set aside a dedicated chunk of time, maybe 15 minutes in the middle of the day where a person is actually encouraged to worry. They’re allowed to worry as much as they want, but only during that allocated time. This is one way to get it out of their system and if worries or fears start to creep into other parts of the day, they work on reminding themselves that they can tuck it away for now and come back to it later during their dedicated worry time.”

If you let the ruminating go on, you’re only making it easier for your brain to return to that dark place later, Pike points out. “Ruminating (rewires) the same neural pathways over and over again; we’re creating deeper grooves in the record we’ve already played.”

Speaking of records, listening to a song you like is one of the best ways to move your mind along, Sapadin says. Just like any creative endeavor you enjoy, “music taps a different part of the brain,” she says. “It’s almost like the part of the brain that’s overthinking can’t do that if you’re really into the music and your body is swaying to the music.”

Pike also suggests turning to music for a mental pickup. “Pick a theme song that embodies the theme of what you’re thinking about,” she says, and sing it. How can you keep brooding when you’re belting “It’s the End of the World as We Know It (And I Feel Fine)”?

Look for songs that can help shake you out of a funk, rather than dark or depressive songs. Though sad or anxious musical choices can be validating, they can also reinforce your negative emotion. Instead, choose songs that are in opposition to what you’re experiencing to help shift your emotional framework. The goal should be to shake things up and get you out of a negative, emotional stew.

If you’re afraid of, say, elevators, a psychologist may encourage you to approach, enter and eventually ride them until they’re no longer threatening. You can do the same thing with a thought, Pike says.

“Boil the essence of the thought down to 10 words or less and repeat that thought over and over again until you get bored,” she recommends. Repeating “I bombed the job interview” is better than saying, “I said the wrong thing. The other applicants are better. My references were poor,” Pike says. That’s because your brain treats each new thought as an independent threat. Consolidating and repeating the worries allows your brain to check that box as nonthreatening and move on.

If being in your head doesn’t feel good, be in your body. “Thinking is a mental activity, so the best thing to do is start doing something,” Sapadin says.

Anything that uses the senses can work, from smelling some lavender oil or doing pushups to biting into a lemon or dunking your hand in a bucket of ice. “It flips your brain into, ‘What’s this? That’s very cold,'” Pike says.

If you have more time, distract yourself with a hobby you enjoy, says Sapadin, who recommends making a list of five activities you’d like to do more. “People who struggle with overthinking often don’t make time for fun activities,” she finds.

Reconnecting with nature and getting some fresh air and sunshine can do wonders for easing anxiety and boosting your mood, says Dr. Michael Brodsky, medical director for behavioral health for L.A. Care Health Plan in Los Angeles, the largest publicly-operated health plan in the U.S.

And it doesn’t have to take a long time either. “Spending 20 minutes a day in natural surroundings has been shown to foster a sense of well-being. If you have a chance to exert yourself while you’re outside, even better.”

Whether it’s social media, television or radio news or even just gossip from co-workers, unhelpful chatter can get in your head and ratchet up your overall anxiety level, often about things you have no control over.

Brodsky recommends limiting social media use to once per day, “and be thoughtful about your sources. Facebook and Twitter are not exactly known for accuracy.”

Overthinking and perfectionism go hand in hand, says Sapadin, who notes that ruminating about a creative endeavor like writing a chapter or completing a painting are more common than spiraling thoughts about practical matters like where you put the keys.

“You need to appreciate that crafting a perfect product or being perfect isn’t possible — that’s a recipe for creating anxiety, and it’s just not fair to yourself,” Sapadin says. Instead of beating yourself up for imperfections or avoiding projects you’re afraid won’t be perfect, come up with new ideas, make mistakes, regret them and move on, she says.

Brodsky says that while we often don’t have control of circumstances, we do have control “over how we spend our time.” It’s important to recognize that you do yourself “no favors by ruminating on what happens in the past — memories — or what might happen in the future — fantasies. By focusing on the present moment, we avoid missing out on the daily experiences of life.”

While everybody overthinks sometimes, not everyone is so consumed with or distressed by unproductive thought patterns that their daily lives and happiness are disrupted. But if you are, it’s probably time to seek help.

“If anxiety is impairing your ability to work, get along with others or take care of yourself, you should seek professional help,” Lazarus says. “Breaking old habits can be hard and having the help of a professional can support you in gaining the awareness and skills to manage your anxiety.”

That’s important because while techniques like distraction can help everyday worriers in the short term, they can make people with anxiety disorders worse. If you’re always relying on short-term distraction techniques, you may not be dealing with a deeper issue that’s creating the anxiety, and that can worsen over time.

Brodsky adds that “there’s never a wrong time to talk with a mental health specialist.” And if you’re in crisis, get help immediately. “If you’re having thoughts of suicide, call the National Suicide Prevention Lifeline at 1-800-273-TALK (8255) or go to SpeakingOfSuicide.com/resources for a list of additional resources.”

12 ways to put the brakes on anxiety:

— Observe rather than chastise. 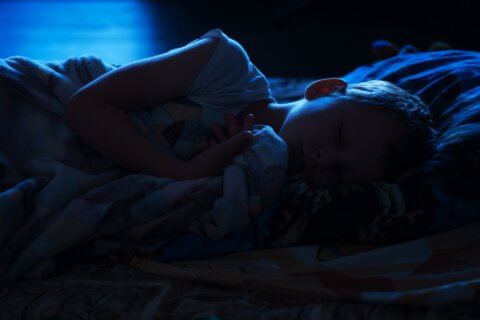 Is talking in your sleep waking up your partner? Here’s how to stop it

Hula-Hoops are trending, but it’s not your childhood version