What are the signs of eating disorders and what brings them about? WTOP takes an in-depth look at their impact.
Listen now to WTOP News WTOP.com | Alexa | Google Home | WTOP App | 103.5 FM

This is the first of a three-part series on WTOP.com examining eating disorders, their impact and the road to recovery.

Kendall Baker, of Virginia, was in middle school when she started to become obsessed with her weight. The blue-eyed blond, who had been born with an eye disease, was being taunted for having a prosthetic eye. She was always thin, but found herself becoming more and more obsessed with dieting and losing weight.

“There was a lot of bullying, and that was the turning point for me — as part of my physical image, I had something to compensate for,” she said.

Baker did not know at 13 she was developing a psychiatric disease that is the toughest to fight, with the highest mortality rate. 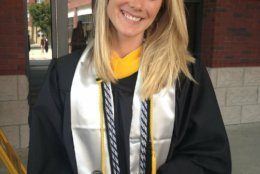 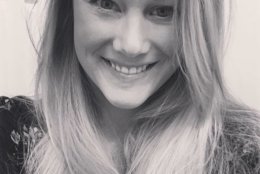 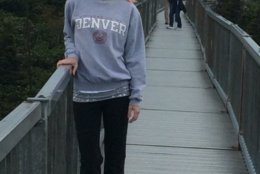 By 15, her secret was out; she was diagnosed with bulimia after taking diet pills.

“I had a cardiac episode on Thanksgiving Day, collapsed and was shaking, and they took me to the emergency room,” Baker said. Yet her binging and purging continued.

The summer before college, she worked as a lifeguard, “Yet all I remember is, my parents have a finished basement in their home, and I spent the entire summer in that basement binging and purging back to back-to-back.”

“Looking back now I can see it was depression, and I think I was an anxious kid,” she said.

Baker continued a downward spiral for 10 years, spending time in six residential treatment centers. It took her eight years to graduate college. Eventually, she said, when she saw her friends moving on in life and felt herself circling the same ground as when she was a teen, she opened herself up to change.

She said she realizes now, after all those years, that her eating disorder was a way for her to find control: “Feeling so out of control of everything else there is one thing you can control, and that is what you put in your mouth.”

The disease is considered a mask for patients who suffer from underlying problems. Many sufferers are extreme perfectionists, highly anxious and/or suffer from post-traumatic stress or psychiatric issues. Many experts believe the disease is under-diagnosed, with people suffering for years in silence, and only people on the extreme ends getting help.

“Chances are someone you know has an eating disorder,” said Dr. Irene Rovira, the psychology coordinator at the Center for Eating Disorders at Sheppard Pratt in Baltimore. “You’re basically trying to heal an internal issue with an external solution. It is like your car needs a new transmission and you take it in for a paint job.”

Author Jenni Schaefer and researcher Jennifer Thomas, a Harvard Ph.D., write in their book, “Almost Anorexic,” that research indicates many people float undiagnosed in and out of disordered behavior for years to a lifetime.

“One in 10 teenage girls and one in 20 Americans struggle in key symptoms of an eating disorder, and most often they are not getting help because they don’t meet diagnostic criteria,” Schaefer said.

Baker, now recovered at 30, didn’t think she would make it this far. She lost her best friend, whom she met in an in-patient treatment center, to complications from anorexia in November 2018.

Anorexia can be characterized by extreme emaciation. Sufferers who lose a large percentage of their body weight can see a range of problems, from osteoporosis to anemia to organ failure. She says her friend wanted people to know no one would willingly choose that path in life.

Abdominal pain, constipation and growth of fine hair covering the body are all signs of anorexia, but it turns out the root of the problem is what experts call the starving brain.

“[People] get into kind of an out-of-control spiral. The more they starve, the more they want to starve,” says Dr. Walter Kaye, of the UC San Diego Eating Disorder Treatment and Research Program.

Kaye has conducted brain imaging and genetic studies on sufferers of extreme eating disorders. His findings indicate the brains of people suffering from anorexia directs them to feel anxiety, as opposed to pleasure, when eating.

“There are probably some wiring differences that create a vulnerability, and there are also some changes that occur secondary to starvation,” Kaye said.

Kaye’s research also points to alterations in the brain’s neurons and circuitry, which helps explain why the hunger drive, even in extremely emaciated patients, may not be activated.

Dr. Steven Crawford is co-director of the Center for Eating Disorders at Sheppard Pratt, in Baltimore, which includes a 34-bed in-patient residential treatment center.

“[It’s] hard for people to understand: ‘Why don’t you just eat?’ It is not as easy as it sounds, because the brain is trained to behave in certain ways,” Crawford said.

Even after patients re-feed and regain lost weight, it can take months for the starved brain to heal. The brain, in a sense, is fighting recovery.

“With anorexia, as you start doing better you start feeling worse. And if you just go back to your eating disorder, you are going to feel even better. So it’s like a constant calling to go back to the disease,” Crawford said.

Even before developing anorexia, sufferers tend to share some common traits, including social anxiety and extreme perfectionism. Kaye said before onset, children tend to be super achievers who do well in school, so parents are surprised when the psychiatric disorder surfaces.

A video on the UCSD website explains the newest research on the brain.

“There is a powerful biology driving this. Parents shouldn’t blame themselves or feel guilty. Nor should they blame the person with anorexia nervosa,” Kaye said.

Yet even though extreme eating disorders are the deadliest of all psychiatric diseases, researchers say there is a lot they don’t know, and recommendations from eating treatment centers vary and are dependent on the experts employed. Kaye said researchers lack large studies on eating disorders to draw on, and are basically borrowing treatments from other psychiatric disorders.

“We don’t really have powerful treatments; there [are] no FDA-approved treatments. Schizophrenia and bipolar disease get much, much more funding,” Kaye said.

It’s important to notice the signs and symptoms of anorexia and bulimia. These are some of them, according to the National Institute of Mental Health:

Other symptoms may develop over time, including: