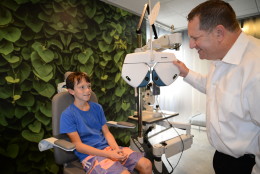 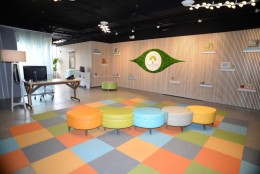 WASHINGTON — It’s that time of year when books replace beach vacations and pop-quizzes trump Popsicles. But heading back to school can be a difficult time for students who have difficulty seeing the board.

According to the National Eye Institute, more than 40 percent of the country is myopic — or nearsighted. This means close objects appear clearly, but objects in the distance are blurry.

And this condition, which typically starts in childhood, is getting worse.

Since the 1970s, the rate of nearsightedness in Americans 12 to 54 years old has increased by nearly two-thirds. In Asian countries, the progression is even more alarming. Eighty to 90 percent of teens and young adults in China are nearsighted, The Washington Post reports.

For decades, myopia has been corrected with the same conventional approach: prescription glasses or contact lenses. But now, there’s an option for parents who don’t want to keep taking their child back to the eye doctor for thicker lenses each year as their vision worsens.

Treehouse Eyes, a new eye care center with locations in Bethesda, Maryland, and Vienna, Virginia, offers treatments to stop the advancement of myopia in children.

“If it goes unchecked, if it gets worse and worse and worse, the kids are going to be at higher risk for retinal diseases, glaucoma — which can have sight-threatening, life-changing serious consequences beyond needing stronger glasses,” he said. “The more myopic you become, the higher risk you are to have these problems.”

Gerber, who has been working in the eye industry for more than 20 years, said myopia is diagnosed as early as 6 years old — right about the time when seeing a blackboard or whiteboard at school becomes part of the daily routine.

Those with myopia have an elongated eyeball, causing light rays to focus at a point in front of the retina, rather than directly on its surface. Typically, glasses are prescribed to correct the blurry vision — but Gerber said that’s a Band-Aid approach.

“When you put on a pair of glasses, you can see better far away, but you’re still myopic and your eye is going to continue to get worse,” he said.

At Treehouse, specialists use one of three options to stop a patient’s myopia from getting worse. The first is an eye drop, which is applied at night. Andrew Morgenstern, optometrist and clinical director at Treehouse Eyes, said the drops are atropine in a dilute concentration.

“They put it in right before bed, they sleep in it, they take it out in the morning,” Morgenstern said.

The third is a soft lens, constructed with curves and ridges like the hard lens, that is worn during the day.

“The goal of this is to create a de-focus, a little bit of a specialized type of light coming into the eye through that specific contact lens to focus light at the right place, so that we can actually use that to halt the progression of nearsightedness,” Morgenstern explained.

A quick exam at Treehouse determines which option is best for the patient, and most treatments are used until the eye is done growing — at 17 or 18 years old. Morgenstern said to think of the drops or the lenses like a retainer.

The Treehouse treatments are not covered by insurance, and Gerber predicts it will be a while before that happens. The cost is a flat $2,800, which Gerber said is less expensive than paying for more serious complications that can arise from myopia, such as retina surgery.

Both of William Ni’s sons, Andrew and Aaron, were diagnosed with myopia when they were in the third grade and both were fitted for glasses.

“We didn’t know of any other options,” said Ni, of Fairfax, Virginia. “I wore glasses most of my life, my wife did as well.”

At the time, they were living in California, and a friend told them about the option for orthokeratology lenses. They tried it out, and ended up liking the treatment option for its convenience.

“They don’t have to wear glasses during the day, and they do a lot of activities,” Ni said.

“The best thing is that their vision hasn’t worsened. Other kids get thicker glasses; that’s not the case with my sons.”

Other eye doctors, like Ni’s California-based optometrist, have been using the lenses and drops to correct nearsightedness in recent years, but Gerber says no other center focuses solely on myopia treatment. Unlike other eye centers, there isn’t a wall full frames and a person fitting lenses in the office. That’s what makes Treehouse unique — and needed.

An estimated 10 million children in the U.S. have myopia, and research suggests that number is going to continue to increase.

Digital device use and lack of natural light are thought to be contributors to the disease. A 2015 study published in the Journal of the American Medical Association found that children who spent 40 minutes more time outdoors were less likely to develop myopia.

“We’re hunters and gatherers and we do best and our eyes are healthiest when we look off in the distance,” Gerber said. “And there’s nothing in this room that’s longer than 20 feet.”