Demings goes on attack against Rubio in Fla. Senate debate

Democratic U.S. Rep. Val Demings of Florida went on the attack Tuesday in her first debate against Republican Sen. Marco Rubio, accusing him of being a serial liar, while Rubio criticized her for supporting President Joe Biden’s economic agenda. Each accused the other of being an extremist on abortion.
Listen now to WTOP News WTOP.com | Alexa | Google Home | WTOP App | 103.5 FM

MIAMI (AP) — Democratic U.S. Rep. Val Demings of Florida went on the attack Tuesday in her first debate against Republican Sen. Marco Rubio, accusing him of being a serial liar, while Rubio criticized her for supporting President Joe Biden’s economic agenda.

Rubio, a two-term senator, and Demings, a three-term congresswoman and former Orlando police chief, faced questions at the debate in Lake Worth on topics including inflation, abortion, voting rights, gun violence, immigration and foreign policy.

Florida has increasingly shifted rightward in recent election cycles, giving Rubio the advantage as Republicans now lead Democrats with voter registration in the state. But Demings clearly saw the debate as an opportunity to take Rubio on forcefully as she tries to become the state’s first Black senator.

“Every bill I have ever sponsored on abortion and every bill I’ve ever voted for has exceptions,” Rubio said.

“What we know is that the senator supports no exceptions,” Demings responded. “He can make his mouth say anything today. He is good at that, by the way. What day is it and what is Marco Rubio saying?”

Following the Supreme Court’s decision in June to overturn Roe v. Wade, Rubio has expressed his personal opposition to abortion in all cases while saying he’d back abortion-restricting statutes that include exceptions. Demings supports abortion access at least until fetal viability, saying the government should not be the one to determine that.

On gun control, Demings accused Rubio of not doing enough to change laws to prevent shootings, including mass killings at the Pulse nightclub in Orlando in 2016 and at Marjory Stoneman Douglas High School in Parkland in 2018.

“How long will you watch people being gunned down in first grade, fourth grade, high school, college, church, synagogue, grocery store, movie theater, a mall and a nightclub and do nothing?” Demings said.

But Rubio defended his opposition to gun restrictions, saying some proposals would not have stopped many of the mass shootings and Americans have a Second Amendment right to protect themselves.

“Everything she is for would have done nothing to stop any of those shootings,” Rubio said. “Every one of these shooters would have passed the background check that she keeps insisting on. No one here is in favor of mass shootings and violence.”

To address inflation, Rubio said the U.S. needs to stop spending so much money, citing some pandemic relief funds, and to boost domestic oil production. He chastised the Biden administration for its decision to release more oil from the U.S. strategic reserve to help bring down prices at the pump.

“Oil reserves do not exist to win midterms,” Rubio said.

“Of course the senator who has never run anything at all but his mouth would know nothing about helping people and being there for people when they are in trouble,” Demings said.

Rubio also attacked Demings for not passing legislation in Washington, saying all she had done was get post offices named after people. Demings angrily rejected his characterization, noting the buildings were named after police officers who died in the line of duty.

“It’s embarrassing that you think that honoring a person who was a hero by naming a federal building after them is nothing,” she said.

Demings repeatedly accused Rubio of distorting her record and positions on issues.

“I am really disappointed in you, Marco Rubio, because I think there was a time when you did not lie in order to win,” she said.

Rubio maintained that Demings was simply there to support Biden’s and House Speaker Nancy Pelosi’s agenda, while calling himself the most effective senator.

“In the two terms I’ve been there, no U.S. senator has gotten more done than I have,” he said. “The only thing she does is vote 100% with Pelosi.”

Asked whether he would accept the results of the 2022 election, Rubio said, “Sure, because I’m going to win.”

Later, he clarified that “no matter what the outcome is, I’ll support it, because Florida has good laws. They’re not some crazy laws like they have in Pennsylvania and these other places.”

This story has been corrected to reflect that the debate took place in Lake Worth, not West Palm Beach. 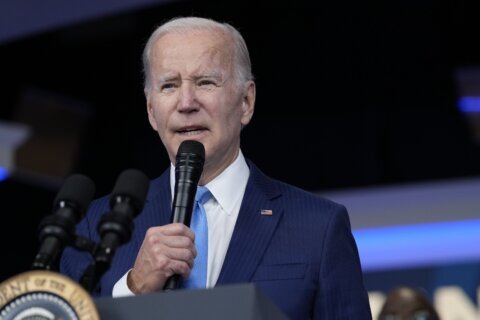 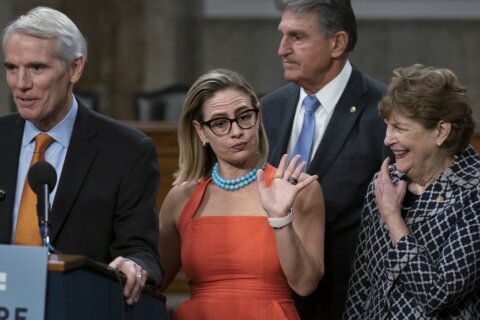 EXPLAINER: What Sinema’s switch means for the Senate