The Justice Department said Wednesday that settlements have been reached in four civil cases after protesters were removed from D.C.’s Lafayette Square during civil rights demonstrations in June 2020.

As part of the settlements, the United States Park Police and Secret Service will “update and clarify” policies on demonstrations “within 30 days of today’s settlement,” according to a Justice Department statement.

Among the changes are more specific requirements for visible identification of officers, limits on the use of non-lethal force and procedures to facilitate safe crowd dispersal.

The plaintiffs — Black Lives Matter D.C. and individuals who attended the protests — agreed to dismiss their claims, according to the statement.

“The federal government is committed to the highest standards for protecting civil rights and civil liberties in any federal law enforcement response to public demonstrations,” Associate Attorney General Vanita Gupta said in a statement.

“These changes to agency policies for protest responses will strengthen our commitment to protecting and respecting constitutionally protected rights.”

“It is good for the public and good for our officers. The United States Park Police is committed to ensuring people can gather safely to express our most fundamental and cherished right to free speech. This updated policy is designed to be accessible and understandable to both our officers and the public, further strengthening that commitment,” Sams said.

In its own statement, the D.C. ACLU said the changes would “settle some of the legal claims by civil rights protesters unconstitutionally and brutally attacked outside the White House with tear gas and other military-grade weapons while demonstrating for Black Lives Matter and racial justice in June 2020.”

The organization said lawsuits were filed after hundreds of people demonstrating in Lafayette Square against police brutality and “Derek Chauvin’s murder of George Floyd were violently dispersed, without warning or provocation, by U.S. Park Police and other federal and local enforcement officers using chemical irritants, rubber bullets, smoke bombs, flash grenades, and a baton charge.”

The ACLU noted that after the protesters had been dispersed, then-President Donald Trump posed for a photo holding a bible in front of St. John’s Episcopal Church.

“The use of tear gas and rubber bullets will never be enough to silence our voices or diminish our duty to demand an end to police violence against Black communities,” said April Goggans, core organizer of Black Lives Matter D.C.

“Today marks a win for the ongoing resistance against all attempts to subvert dissent. These attempts to disrupt the ability to organize for an end to the recurring trauma caused to Black communities by police attacks will not go unchallenged.”

Going forward, the Park Police said it will:

And within the next 30 days the Secret Service will:

The ACLU called the changes “an important step forward in ensuring that protests are not suppressed.” 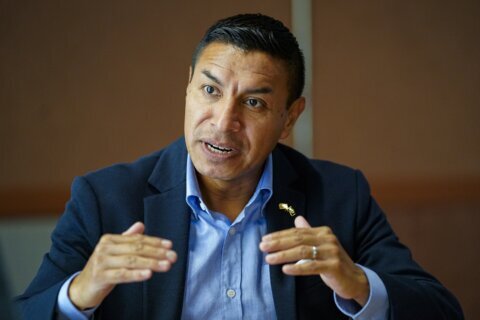 Election skeptics slow to get sweeping changes in GOP states