WASHINGTON — Some federal contractors impacted by the partial government shutdown face frustrating uncertainty, according to an industry group that works with companies employing tens of thousands of people in the national capitol area.

Contractors who still are on the job providing mission-critical support to unfunded federal agencies expect to get paid later. The status of those not reporting to work depends on individual company policies. Their futures are unclear.

Chvotkin said most contractor companies are doing the best they can to pay employees. But, he adds, some don’t have the cash flow to sustain payrolls long-term if no money is coming in. People could lose their jobs.

“That’s frustrating, because you just don’t know what plans to make, what the short- or long-term impact could be on you,” Chvotkin noted.

Federal contractor workers who are unable to report to work on the property of an unfunded agency aren’t necessarily idle. Depending on individual company policies they might be working from home, taking a training class, on vacation, or on leave without pay.

“When we don’t know what the horizon is and the circumstances change almost daily as agencies’ missions change,” Chvotkin said of the daunting uncertainty. “What was not critical before may become critical and someone may be called back to work.”

Conversely, decisions could be made that change someone’s “mission critical” status to a function deemed not necessary.

“All of that uncertainty creates a real challenge for the employer and the employee,” Chvotkin said.

Offering advice to impacted contract workers, Chvotkin said they should stay in close communication with supervisors because their status could change quickly. He also advised to be ready to return to work as soon as possible, if needed. 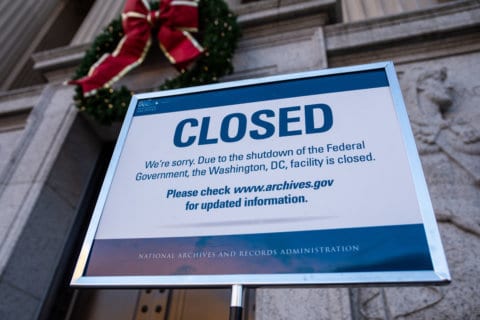