Cantlay sets an early target after a long day at Memorial

DUBLIN, Ohio (AP) — Patrick Cantlay finished his long day with some of his best golf, running off three straight birdies to close out a 5-under 67 and the lead Friday in the rain-delayed Memorial.

He arrived at Muirfield Village before dawn. He finished when it was time for dinner. And except for a few inevitable mistakes, he was solid in the 33 holes he faced.

“We’re out there for such a long time today that you could fall asleep at the wheel a little bit,” said Cantlay, who won the Memorial two years ago. “So being cognizant of that and checking in with yourself — are you as focused as you can be? — I think is the key.”

Cantlay was at 8-under 136 on the refurbished Muirfield Village, where the rough is thicker and denser than usual and the rain that washed out nearly half of the opening round didn’t help.

Scottie Scheffler recovered from three bogeys in his opening four holes to scratch out a 71 and was at 6-under 130 among those who completed the second round. They all had long days, having to finish most of the first round in the morning and 18 holes in the afternoon, with only about 30 minutes in between.

Collin Morikawa and Jon Rahm, both winners at Muirfield Village last year in different tournaments held in consecutive weeks, were among those who had to return Saturday morning.

Rahm was tied for the lead at 8 under through 13 holes, making a 2-foot birdie putt before darkness halted play. Morikawa was right there with him until a triple bogey on the 12th hole.

The tournament should be back on track in time for the final round Sunday.

Jordan Spieth had reason to wonder if his long day would lead to a short week. He had a hard time keeping his tee shots in play, meaning hacking out and trying to save par with his wedges. He was 5 over for his opening round when he fired an 8-iron into 8 feet for birdie and a 76.

He followed that with a 67 to reach 1-under 143. That was more than enough to make the cut and to at least still be in the mix.

“I needed something to stop the bleeding this morning,” Spieth said.

Spieth played with Cantlay and Bryson DeChambeau, and it didn’t lack for excitement. Cantlay was playing great. DeChambeau was bothered by a few spectators calling him, “Brooksy,” a reference to his spat with Brooks Koepka, who isn’t even at the Memorial.

Some spectators were removed. DeChambeau laughed it off later by saying it was “flattering.”

DeChambeau also was at 143 with three double bogeys on his card. One of them came in his second round on No. 1, when it took him four shots to get down from 80 feet off the front of the green. He also hit his second shot to 4 feet for eagle on the par-5 fifth hole.

“All in all, it’s not my best,” DeChambeau said. “But certainly worked hard to get it in and here for the weekend.”

Despite the disjointed nature of the tournament, one constant as been the course. Several of the holes were redone — some obvious, such as the par-5 fifth and 15th hole, some more subtle with greens being shifted — and the rough has been brutal as ever.

The biggest change has been the par 5s. Some of it is because of the soft conditions, but players are not going for them in two as much as they once did.

Rory McIlroy went for the green on No. 5, landed just over the back into a bunker and did well to blast out to 20 feet.

“You would rather be 90 yards away hitting a nice wedge shot in there. You can get it way closer,” McIlroy said after a pair of 72s. “So I think people are just realizing you’re probably more likely to make birdie just by laying up, which is a shame, because it’s sort of exciting to get to go for par 5s. And it’s sort of taken that a little bit out of play.”

If Cantlay’s lead were to hold, it would be the highest score to lead after 36 holes at the Memorial since 2012, unusual only because rain leads to softer greens, and the best in the world thrive in those conditions.

Cantlay wonders if the difficulty of the par 5s hasn’t changed the dynamics of scoring.

“But that’s just the way it is now and I’m sure if the fairways firm out a little bit you will be able to hit the ball a little further and maybe get to some of the par 5s,” he said.

For now, he’s happy with his score. Cantlay hasn’t had a top 10 since a tie for third at Pebble Beach, a stretch of seven tournaments. That’s his longest streak without a top 10 since he returned from a severe back injury in 2017.

“Just fundamentals and getting my swing back to a place that I can start the ball where I’m looking all the time,” Cantlay said. “I wasn’t too far off, just a little off. So golf’s like that sometimes.” 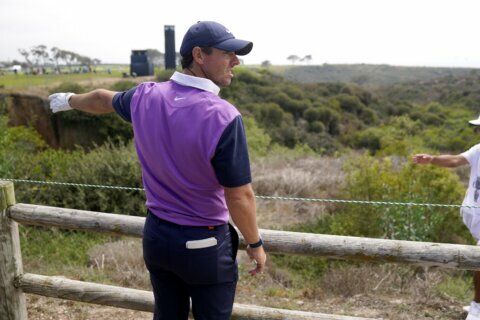