Home » Golf » How a Howard student…

How did a Howard University student convince an NBA superstar to help him fulfill his dream? A simple question, a rare tenacity, and a shared love of the game.
Listen now to WTOP News WTOP.com | Alexa | Google Home | WTOP App | 103.5 FM

All Otis Ferguson IV ever wanted to do was be able to attend Howard University and to play golf. His three older sisters had all matriculated at the HBCU on the hilltop, so it seemed a natural fit. There was just one problem: There was no golf at Howard.

Most college students would probably accept that they had a choice to make, that you can’t always get anything and everything you want. Ferguson accepted that Howard was the place for him, but not that he couldn’t live both dreams. It was that resolve — three years before he met Steph Curry and planted the seed that would lead to Curry’s seven-figure donation to sponsor Division I golf at Howard — that turned a dream into reality.

Ferguson turned down a scholarship offer to play golf at Miles College, a Division II liberal arts HBCU in Alabama. It was a decision that weighed increasingly on him as he made his way through his college experience in D.C.

“I was kind of getting frustrated, because I was thinking about all the experiences that I had at Howard that I really cherished and I really enjoyed, but there was still kind of that feeling that I wish I could have played golf at the same time,” he said. “I almost would trade this to have had the opportunity to play golf.”

Ferguson didn’t play at all his freshman year, but held an interest meeting on campus during his sophomore year. When more 40 people showed up, he felt like his hunch was right, that there was enough interest to launch at least a club team. But that spring, the rainy weather took forever to break, and the actual golf never really took off.

“Nothing really happened in terms of playing,” he said.

Still, Ferguson pushed forward, looking for the next steps to make his dream a reality. He realized a faculty adviser would help his case, so he started asking around to find one who loved golf. His search led him to Kim Wells, director of Executive Programs Management at Howard’s business school. He didn’t know Wells before then, but convinced him to sign on.

Ferguson got a foundation to donate clubs and the school to cover greens fees for club tournaments. Though they played in just two tournaments last year, Ferguson says they finished in the middle of the pack, an encouraging sign moving forward.

That winter came a chance encounter with Curry, at a movie screening on campus. Amid the hordes of students vying for Curry’s attention, Ferguson shouted out that they should get together for a round of golf, one of Curry’s biggest passions outside of basketball. He has competed as a wild card entry in some low-level professional tour events and launched Holey Moley, a mini golf-themed obstacle game show through his production company this summer.

Talking to Ferguson, it’s easy to understand why someone like Curry would take an interest in a shared passion. He’s hopeful, genuine and earnest to his core. He speaks about his faith, something else he shares with Curry, and even shares some of the same quiet but confident demeanor when he speaks. It was all enough to convince Curry to share his contact information, sparking a correspondence that would culminate in his donation.

That summer, back at home in Michigan, as Ferguson worked behind the scenes to sell his dream to the NBA star, he was out playing every day at Heathers Club of Bloomfield, near his hometown in suburban Detroit, rekindling his own love for the game.

“That was the first time, since, really, high school, that I’d had the opportunity to play golf an extended period of time,” he said.

Ferguson shared his story with WTOP during a recent round of golf at Langston Golf Course, the historic site where the university and Curry made the golf announcement last month. Immediately after the news conference, Curry, Ferguson, Howard University President Wayne A.I. Frederick, and Callaway Golf Chip Brewer played a round together at the historic course. It was that round that was all Ferguson had actually asked for when he met Curry.

While Ferguson says it was the most interesting round of golf he’s ever played, it wasn’t his best round.

“Part of me really wanted to be competitive and play my best golf, but I didn’t want to miss the moment,” he said.

As you might expect, Ferguson chose the moment. Curry beat him in their round together, but promised him a rematch down the road. There’s a chance that, when that round happens, Ferguson will be a more official member of the Howard golf team.

The school plans to open the program for the 2020-21 school year, with two scholarships in place on the women’s side and one on the men’s side. The details are still being worked out, but the hope is that Ferguson, who will have graduated with his bachelor’s degree by then, will be able to use his final year of athletic eligibility as part of a graduate program to get a year on the team.

“Even before all of this, I wanted to try to find a way to afford a year or two to play golf and see where it can take me,” he said. “All of this has been more than a dream come true.”

As the opportunity has presented itself, Ferguson has started to look into what graduate programs make the most sense for his future. He’s not sure what he wants to do just yet, either in terms of subject matter or duration of the graduate program, but he’s embracing the uncertainty.

“One thing I always really admired about golf is that there’s no set path,” he said. “I’m open to wherever this road takes me.”

Ferguson has never had a hole-in-one. Discussing the randomness of the accomplishment, the confluence of luck and circumstances required for it to happen, he espouses his philosophy of the phenomenon, which might as well stand in for all of this, the golf club, Curry, the gift, his uncertain future.

“It’s just so random,” he said. “If it happens, it happens. If not, I’ll take my birdie and get out of there.”

Column: Golf can’t expect to be this entertaining always 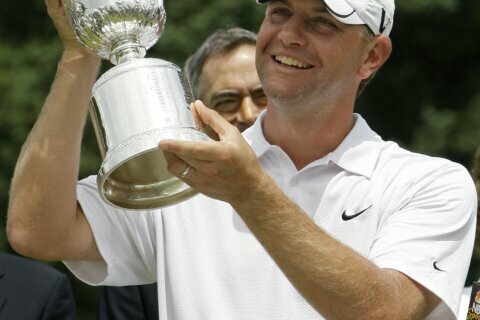 Column: US Open loses part of identity without qualifying