John Daly is a larger than life character, but he is also still a golfer, something that doesn't look to change anytime soon, if ever.
Listen now to WTOP News WTOP.com | Alexa | Google Home | WTOP App | 103.5 FM
(1/2) 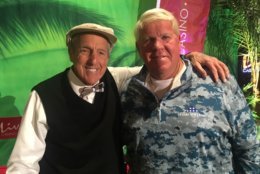 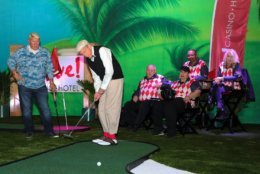 Daly is something of a redneck Renaissance man — professional athlete, entrepreneur, even musician — all rolled into a personality larger than life.

He was born just outside of Sacramento, but every roll of his molasses drawl was forged in Dardanelle, Arkansas — a tiny city along the west bank of the Arkansas River halfway between Little Rock and the Oklahoma border — where he moved with his family at age 4 and where he still lives today.

He has released two country music albums, and he has certainly lived enough life to write them without exaggeration.

He was married and divorced four times in 20 years. He’s openly struggled with alcohol and gambling issues. And yet, here he was, at Live! Casino last week, for a promotional putting contest.

Daly sat, somewhat awkwardly, with Live! owner David Cordish, in a director’s chair, enduring a procession of one-on-one interviews. He’s sporting a muted, blue camouflage print polo of his charity, Folds of Honor, and a pair of monotone bluejeans, perhaps the quietest pants he has ever been spotted wearing in public. His face is still round and bronze, his hair still a shock of white, minus the early-career mullet.

But why is he here?

“I’m intrigued about casinos,” he said, and you realize that he is one of the only people who could declare such a thing without it sounding like PR. “I still like to play slots. It would be great to come here and play some slots out of the clear blue and play … I’ve hit a million-two on a slot. I’ve hit a lot of 500s, 800s.”

That wasn’t enough to get him to quit gambling cold turkey, but he claims to have dialed back. Nevertheless, it’s discomfiting to see Daly in the kind of place that has precipitated so much loss.

He is a man known, after all, as much for his meltdowns as his successes.

Daly has been a part of the American consciousness ever since he took advantage of Nick Price’s withdrawal for the birth of his child at the 1991 PGA Championship to sneak into the field as the final alternate. Daly tore up the course at Crooked Stick in Carmel, Indiana, with three rounds in the 60s, winning by three shots despite a double bogey at 17 on Sunday.

With two major championships included in his five overall PGA Tour victories, he’s got nothing in particular left to prove, but he plays on, joining the Champions Tour (formerly known as the Senior PGA Tour) last year.

Daly’s at least as famous — or infamous, depending on your perspective — for how that competitive drive manifests when things go wrong.

Most recently, in 2015, he was in contention to make the cut at the PGA Championship before dunking three straight tee shots into Lake Michigan. So he sent his club to the same watery grave.

But Daly’s been disposing of equipment since before everyone had smartphones to record each blow up for posterity. When asked about a particular round from his younger days, in which he had reportedly fired a club into the Pacific, the actual story ends up being much more dramatic.

“I think I threw the entire set of clubs into the ocean at Pebble (Beach) one time,” he said. “It was a Wilson bag, and I forgot the bag was made of true ostrich, that Wilson did for me.”

Some young fans fished the sticks out and brought them back, but Daly let them keep them.

“Well, Fuzzy would always come up to me, if I wasn’t hitting the driver well in a practice round, and he would just take it and break it,” said Daly. “And I did the same with him.”

Over 15 years, Big John estimates this happened somewhere from five to seven times each way. So, then what, go get a new shaft and try again?

“Just go get a new driver.”

It’s hard to argue with the results, at least as far as the driver is concerned. Daly was the first golfer ever to average better than 300 yards per drive over the course of a full season when he did so in 1997.

The field — and the equipment advances — didn’t catch him until 2003.

Now he is the young guy once again out on Champions Tour, where he earned his first win at the Insperity Invitational last May. He still plays several PGA events each year along with a few in Europe and more than 20 on the Champions Tour, totaling 32-33 per year. And while winning still stokes his competitive fire, the week-in, week-out pressures are gone.

“I don’t really set goals in golf, because I don’t think I have to anymore,” he said. “It’s not like I’m trying to be the number one player in the world.”

Daly has other off-the-course interests that keep him busy and provide a steadier income.

His clothing line of eye-popping prints is appropriately titled Loudmouth, though it stands in contrast with Daly’s own demeanor, which is calm and easygoing. He has a steakhouse in Conway, Arkansas, about 50 miles downriver from his home, which features a 50 oz. tomahawk bone-in rib-eye, which will run you about $70. And he has got a new malt beverage spun off his motto called Grip It and Sip It that he is happy to sell you.

“It’s an 8 percent, 16-ounce can — you might want to get you one,” he said, and if that isn’t the official tag line, it probably should be.

The beverage come in two flavors, the second of which is generically called “half and half,” but which most of us, even the nongolfers, know as an Arnold Palmer. Considering that the half iced tea, half lemonade concoction with a shot booze in it has been colloquially known as a John Daly for quite some time, it’s only fitting that Daly has capitalized on it.

That’s just his nature — believing in and selling himself completely. It’s why it wouldn’t be surprising if he never quit. He has collapsed twice on tour the last few years, once from heat exhaustion, and again last year with a knee injury that forced him to withdraw. But as long as that competitive fire burns — the same one that leads him to a one-stroke win in the promo contest at Live!, sinking a hole-in-one for the victory — it’s hard to see him not playing.

“When you get close to that lead, you get the adrenaline and the rush going,” he said. “If that ever goes away, and the butterflies on the first tee, then I know I need to quit the game.”

If and when he does, he sees the future of golf in good hands, citing players like Jason Day, Rickie Fowler and Justin Thomas as the next generation’s ambassadors.

“They’re building the brand the way that it needs to go, that Arnold Palmer kind of set the way for all of us.”

Daly has set his own way, paved with his own signature drink (and pants). Others may be walking Palmer’s road, but Daly’s path will forever be his own.