As always when we roll these out, it’s best to get the disclaimer out of the way early. These are not my individual opinions of who will win the two leagues’ Cy Young and MVP awards. They are results of predictive models, based on quantifying voter behavior in response to statistics and conditions voters use in their decision-making process. They’re not always right, but they’ve been pretty accurate.

Each model is normalized to 100 for the front-runner to show how close the model expects the BBWAA vote to be. Since the finalists in all three categories have already been announced, we know (like last year) that 10 of the predictions agree with the final 12 between the four races. We just don’t know about the order of things.

Last year’s model correctly predicted all four winners (Blake Snell, Mookie Betts, Jacob deGrom and Christian Yelich). It got the first four in order in the AL Cy Young, the top three in the NL Cy Young, and the first two in the NL MVP, but overvalued J.D. Martinez (fourth, not second) in the AL MVP race.

It’s not always right. It picked Justin Verlander in 2016, who got more first place Cy Young votes, but was edged by Rick Porcello. It also picked Mookie Betts over Mike Trout for MVP. Both votes were close, but it went just 2-for-4 in winners that season.

In 2017, it liked Chris Sale over Corey Kluber by a hair in a race that went the other way. The same went for Aaron Judge and José Altuve. I’ve made tweaks to the formula over the years to adjust voting behavior and refine the results. Here’s what the model tells us will happen this week, when the awards are announced. 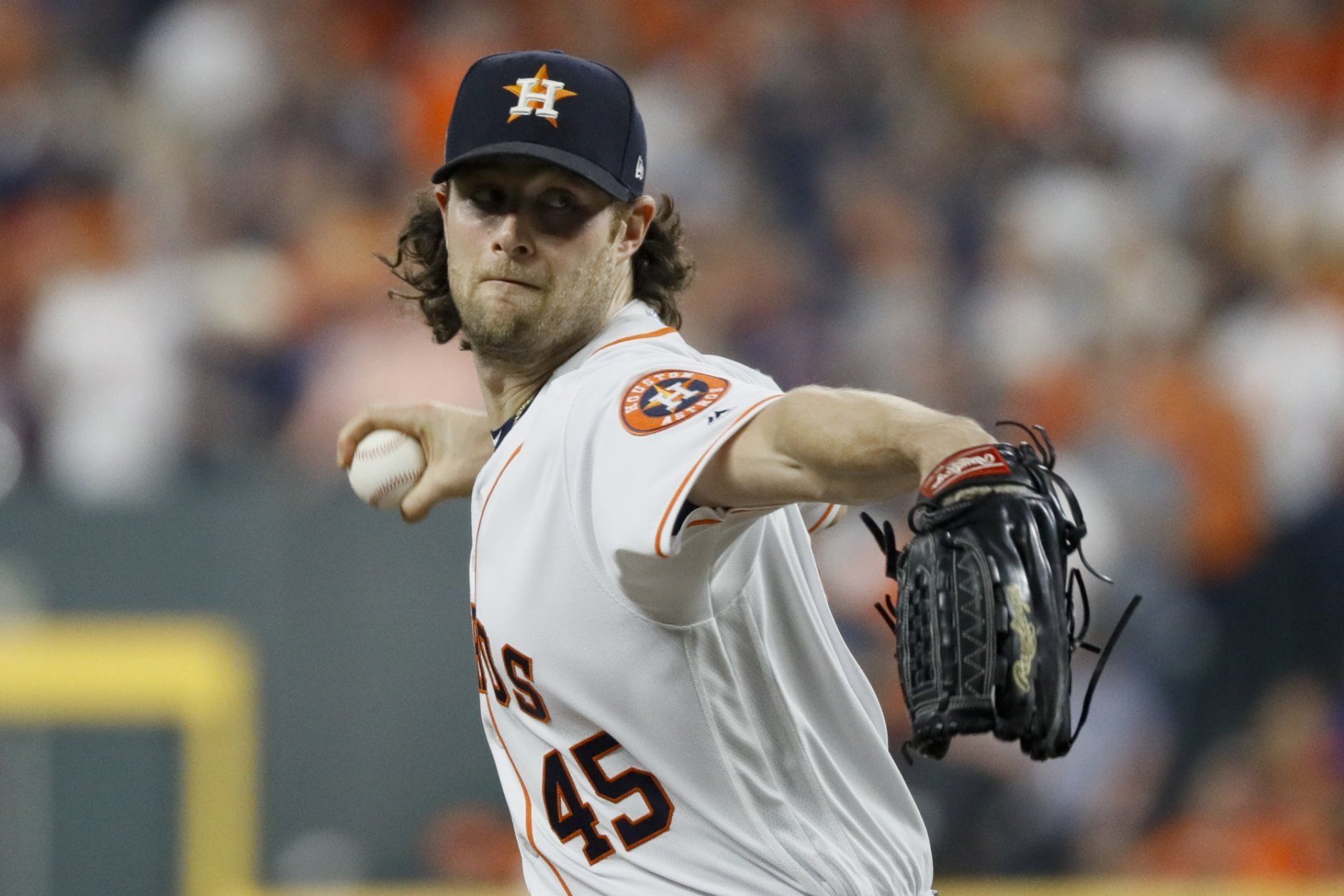 1/4
Houston Astros starting pitcher Gerrit Cole throws against the Washington Nationals during the first inning of Game 1 of the baseball World Series Tuesday, Oct. 22, 2019, in Houston.

Could Justin Verlander come up just shy in another Cy Young race? He’s had an incredible year, leading the league in wins, WHIP, and K/BB rate. He threw a no-hitter for the team with the best regular season record in baseball. That’s all a pretty good recipe for some hardware…in a world without Gerrit Cole. Cole won the ERA title, by a smidgen over Verlander. He led the league in strikeouts. If you combined bWAR and fWAR, the two were identical. He also had the highest strikeout rate and lowest FIP, all of which was just enough to give him the nod in the model. We already know Morton will actually finish third, which isn’t all that surprising given how tightly-bunched the rest of the pack is behind the top two. 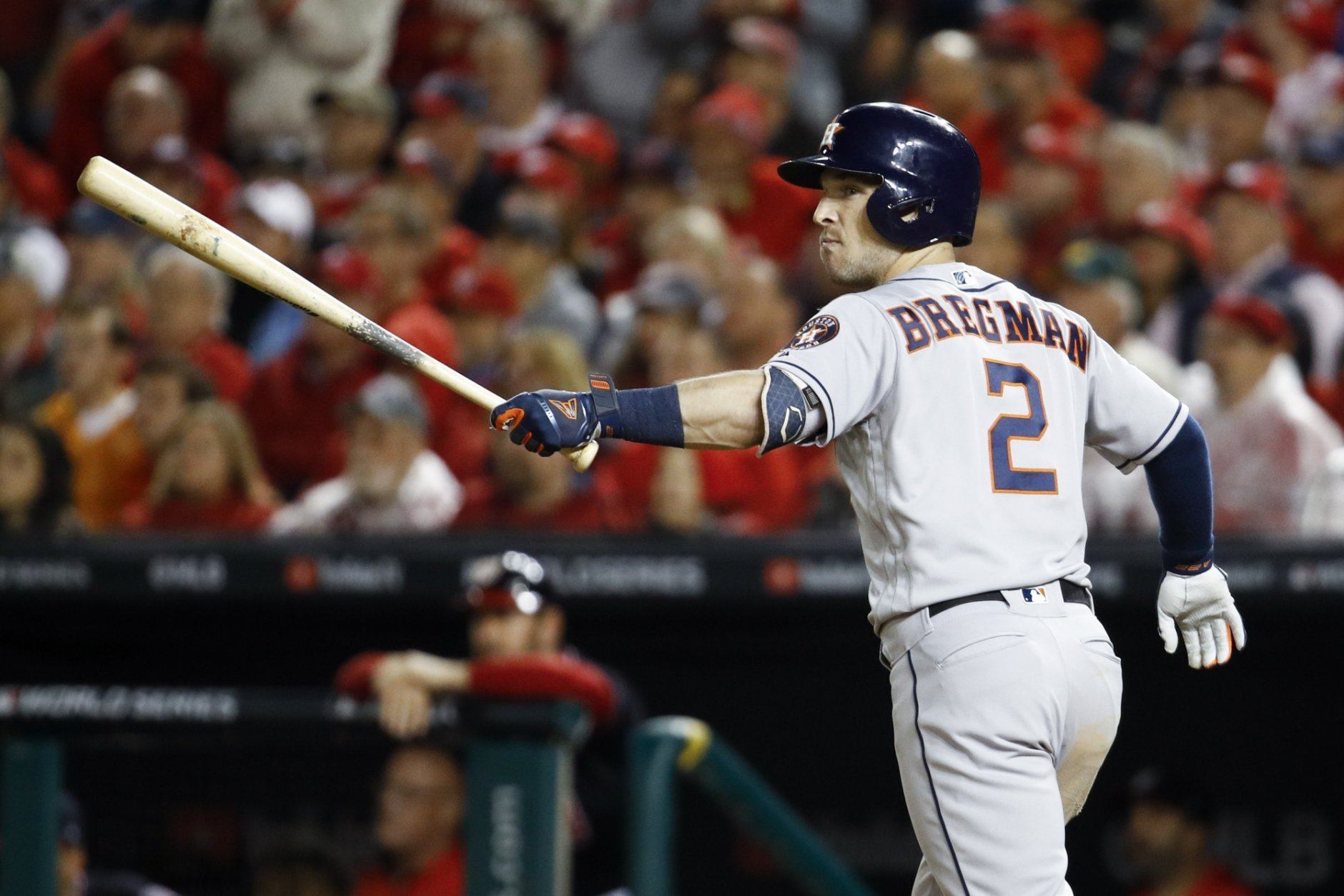 2/4
Houston Astros’ Alex Bregman watches his grand slam against the Washington Nationals during the seventh inning of Game 4 of the baseball World Series Saturday, Oct. 26, 2019, in Washington.

Ah, the annual Mike Trout debate. Trout was well on his way to his third MVP in the last six seasons before his year was cut short prematurely on Sept. 7. While he still led the AL in OPS, that opened the door for Alex Bregman, who jumped ahead in a number of counting stats (runs, RBI, XBH) for the 107-win Astros. In his final 19 games after Trout’s injury, Bregman posted a 1.195 OPS and slugged seven home runs, walking 19 times against just seven strikeouts. If there is any recency bias in the voting, his strong finish – like Yelich’s last year – could be the difference. In addition, there is no surprise around these parts that Marcus Semien snagged third place after his monster season. It will be interesting to see where D.J. LeMahieu (eighth in the model) lands in the final vote. Perhaps the biggest surprise in terms of the difference between the model’s results and the actual top three vote-getters comes in the National League Cy Young race. These awards are voted on before the postseason, but to not see Stephen Strasburg’s name in the actual top three shows that ERA (he was 10th) still holds a lot of weight. Strasburg led the NL in wins and innings pitched, was second in both WAR measures, and second in strikeouts. He was never going to win the award, but he may split some votes with Max Scherzer, the curse of pitching for the same team as another ace. As it is, an award that Scherzer seemed to have on lockdown until his midseason injuries is projected to go, once again, to Jacob deGrom. Much like Strasburg, if these awards included the postseason, Anthony Rendon might have run away with this one. But after a torrid August and early September, he really struggled down the stretch of the regular season hitting just .185 with two home runs his final 20 games. That was enough that, despite Christian Yelich’s season-ending injury, he wasn’t able to close ground in the model. Rendon won the RBI race, but ceded the batting title to Yelich, all while Bellinger righted the ship over the season’s final two weeks, and took home a Gold Glove to boot. This one could still be very close at the top, as injuries are always tough to weigh. But the model likes Bellinger.

Porcello expected to start as Mets host the Braves