Hundreds of demonstrators took to the streets and risked arrest pleading for Congress to codify abortion access at the federal level, after a June 24 decision eliminating a decades-old constitutional right to an abortion. They were brought together by the progressive Center for Popular Democracy and its partners, including Planned Parenthood.

Hoisting a long green banner reading, “We won’t back down,” protesters circled the Supreme Court building before starting a sit-in at the intersection of First Street and Constitution Avenue in Northeast. Traffic was rerouted for over an hour as U.S. Capitol Police led demonstrators out of the area, one or two at a time, to a makeshift processing site on the Capitol lawn where they were fined and released.

Traffic stopped. Arrest warnings made. Cops walking protesters out of the area one or two at a time, crowd erupting in cheers whenever someone is led away. First major civil disobedience action near the Supreme Court in the week since Roe was overturned. pic.twitter.com/hI4N1NvESN

Capitol Police said 181 people were arrested under D.C. code for crowding, obstructing or incommoding, a statute often used to cite people demonstrating within and around U.S. Capitol grounds.

Mass civil disobedience actions — activist parlance for events in which participants willingly risk arrest drawing attention to a cause — were common in the halls of Congress before the pandemic restricted public access, but have been slow to return. Thursday’s protest for abortion rights also marked a return to form for CPD, which in years prior has organized such actions over a number of issues including immigrant detentions and affordable health care.

Among those arrested was U.S. Rep. Judy Chu, a leading sponsor of the Women’s Health Protection Act, which aims to safeguard abortion access. In a statement, Chu said joining the sit-in was an “easy” decision for her and echoed mounting calls to alter Senate filibuster rules.

“When I think of all these women — and more — the decision to join in a peaceful demonstration to make clear we will not allow the clock to be rolled back on abortion rights was easy,” Chu said. “We are in this together and we will not back down or be silenced.”

Moments after crossing police lines to join abortion rights supporters, Barber roused the crowd in a chant: “We won’t back down: Every city, every town, every street … get a ballot right now and vote.”

Thursday’s march is unlikely to be the last over the abortion rights issue — the Women’s March is promising a similar demonstration set for July 6, furthering what the group calls a “summer of a rage,” declared after the early May leak of Justice Samuel Alito’s draft opinion.

“We will not be silent. We will not be ignored. And we will not let politicians play games with our lives and our futures,” the Women’s March said on its website. “If our leaders won’t take action, we will.” 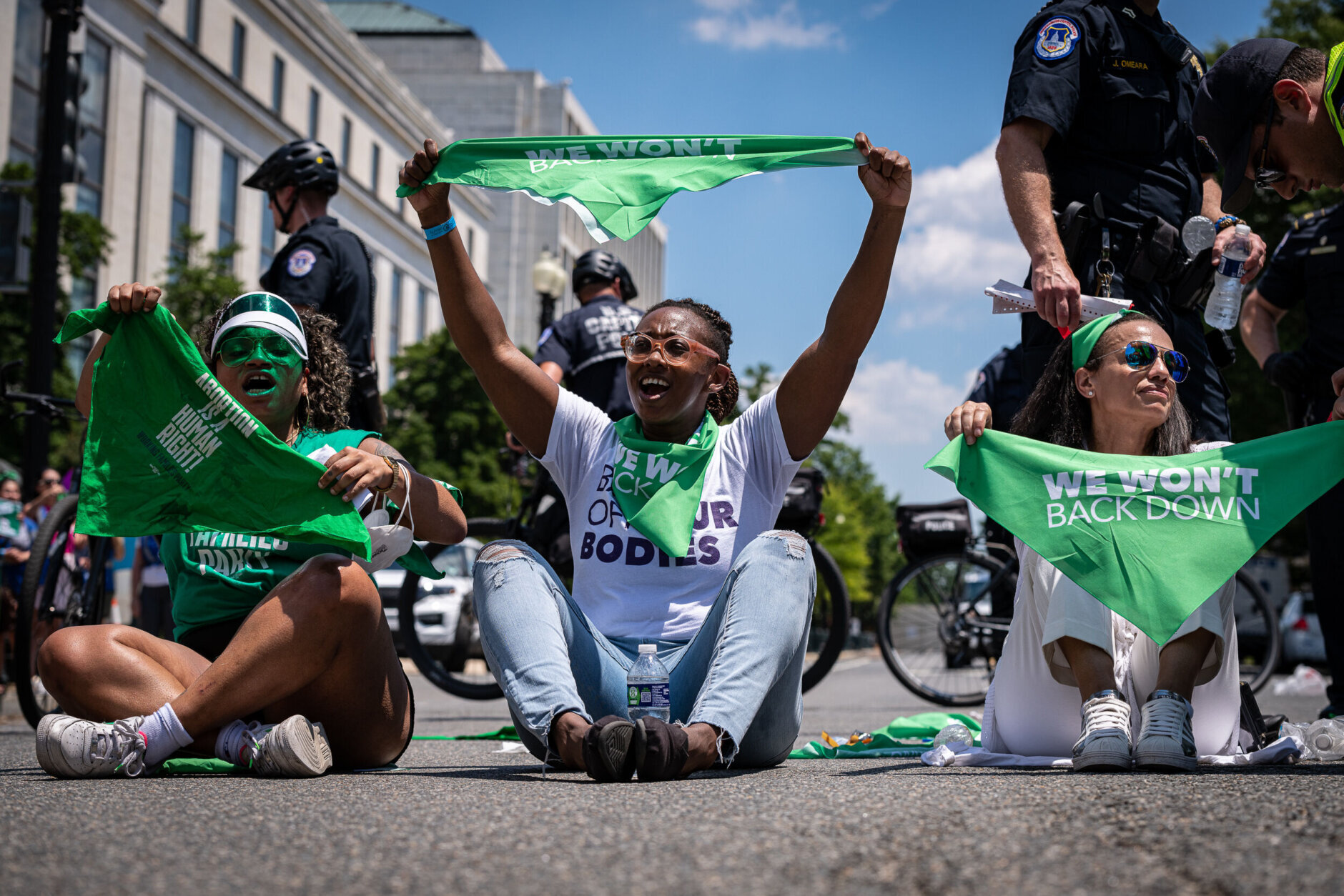 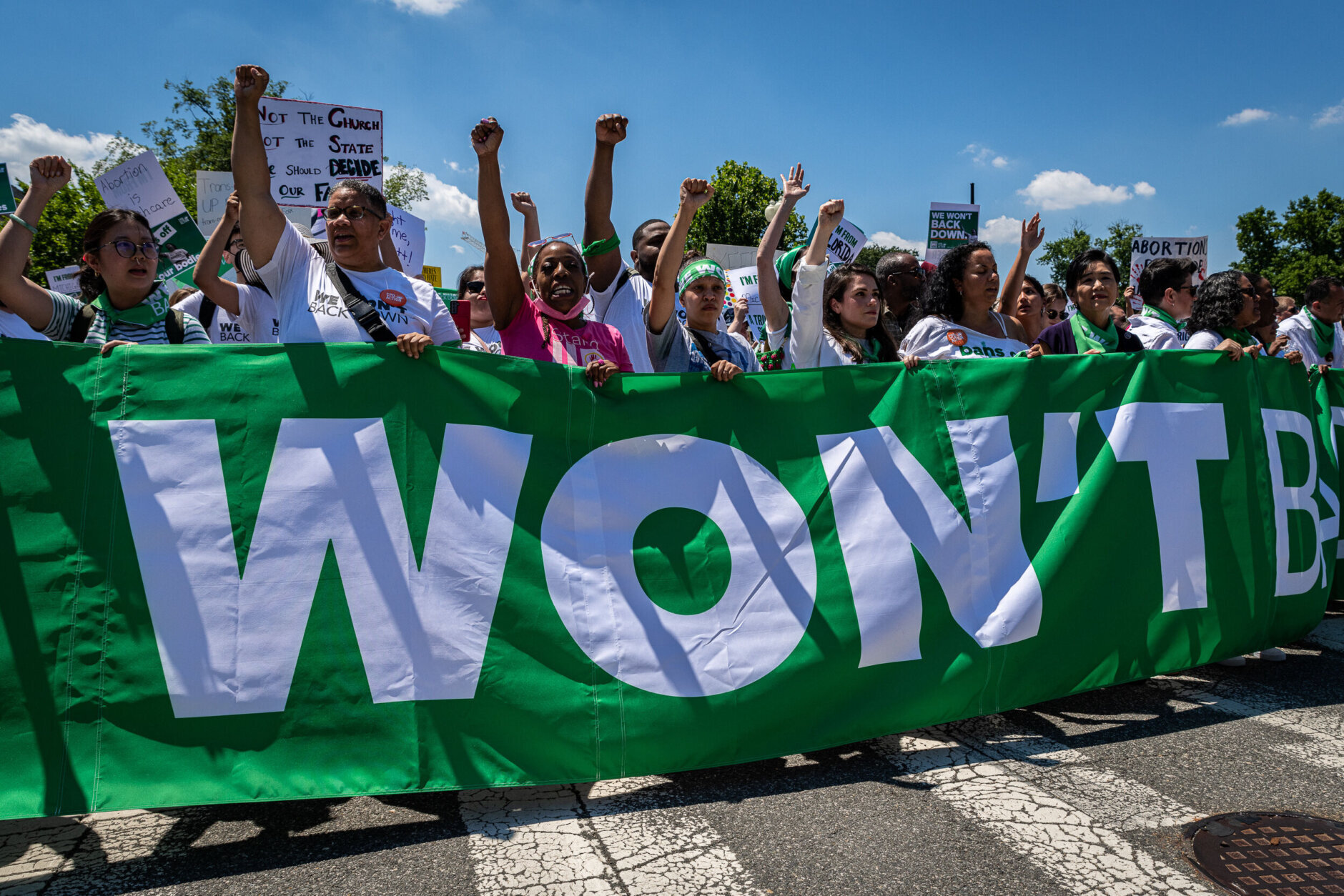 2/10
Abortion rights activists hold a banner reading, “We won’t back down,” after a rally near the U.S. Capitol building. (WTOP/Alejandro Alvarez) 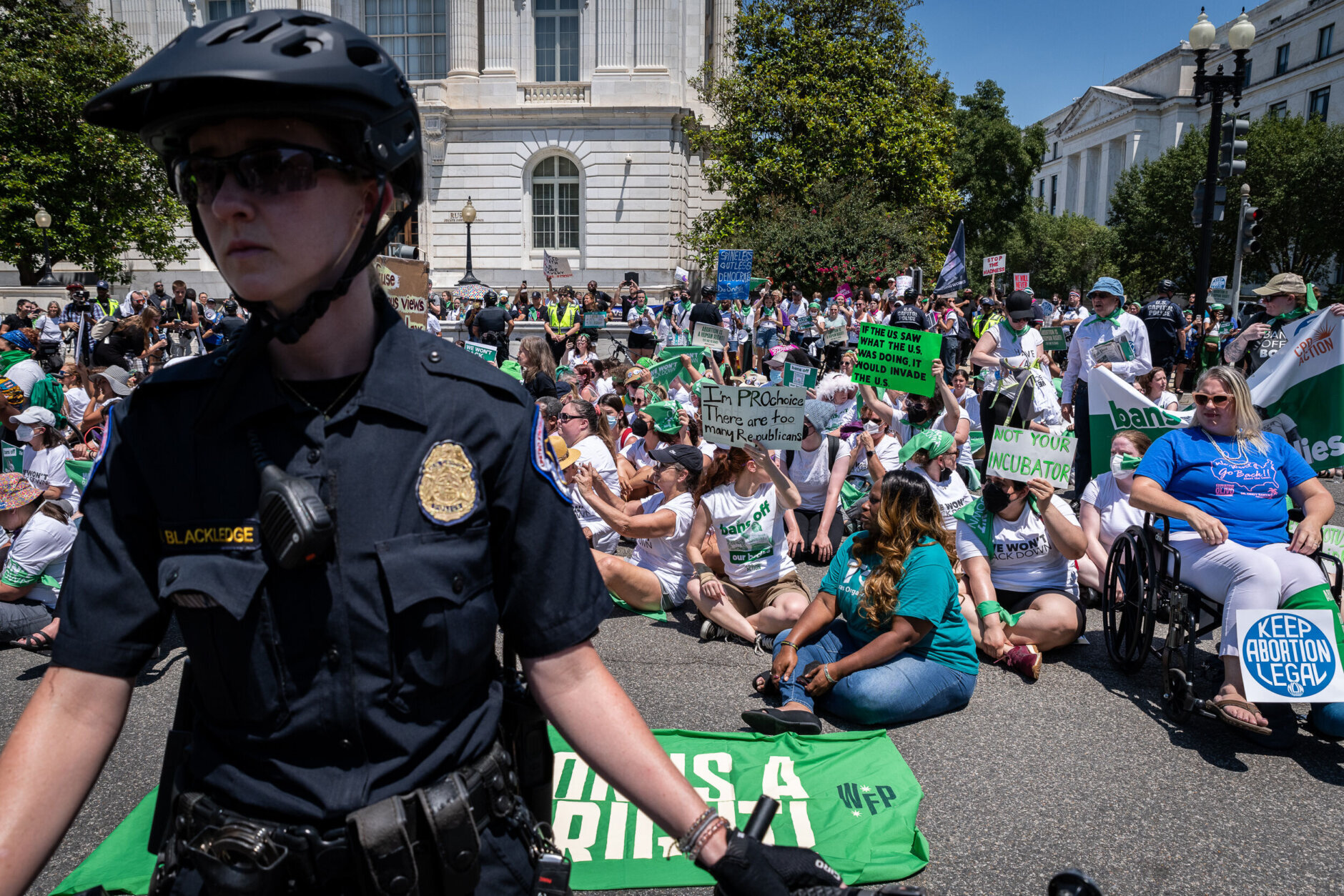 3/10
A U.S. Capitol Police officer blocks access to a sit-in in the moments before arrests began. (WTOP/Alejandro Alvarez) 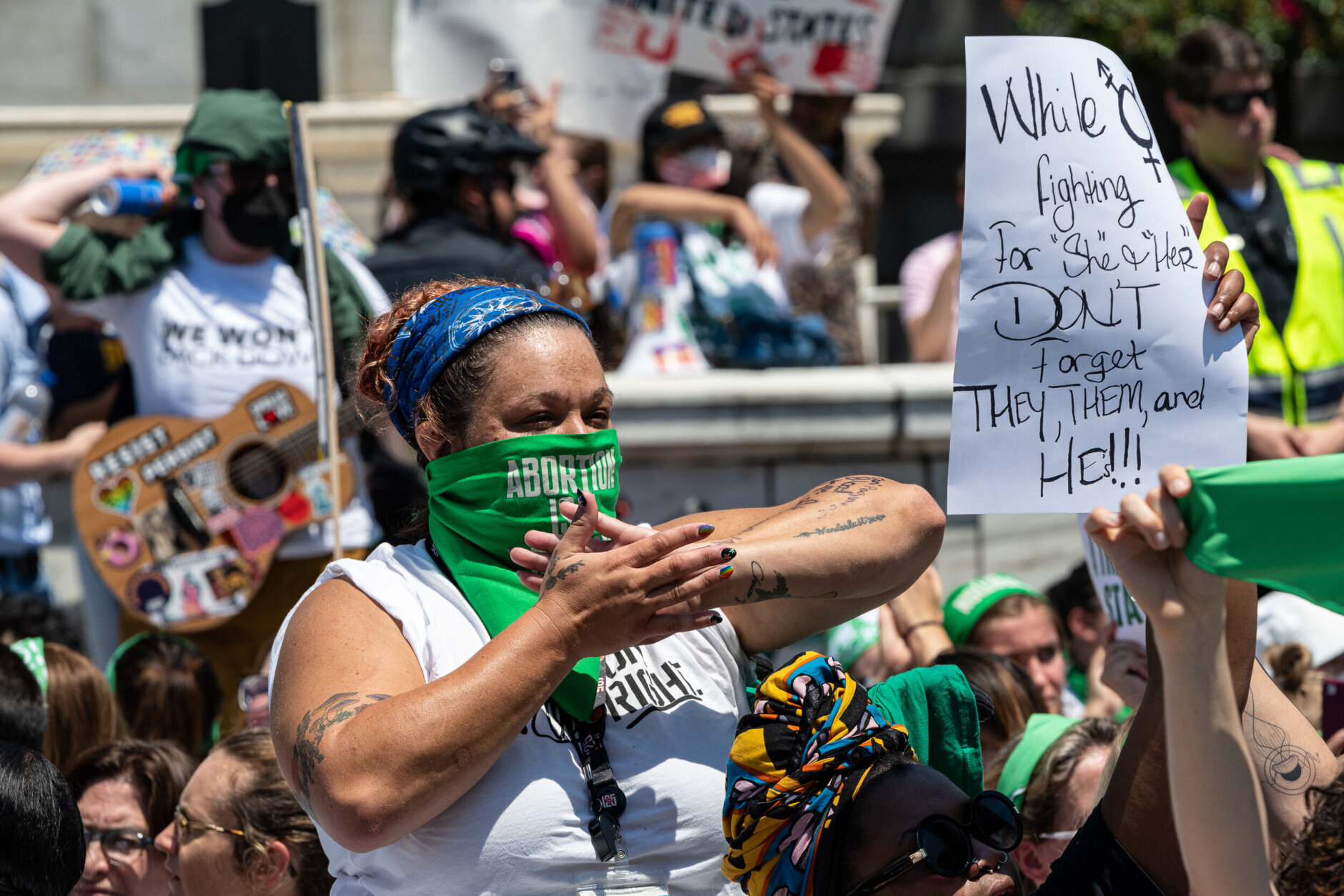 4/10
An abortion rights supporter chants in the middle of Constitution Avenue. (WTOP/Alejandro Alvarez) 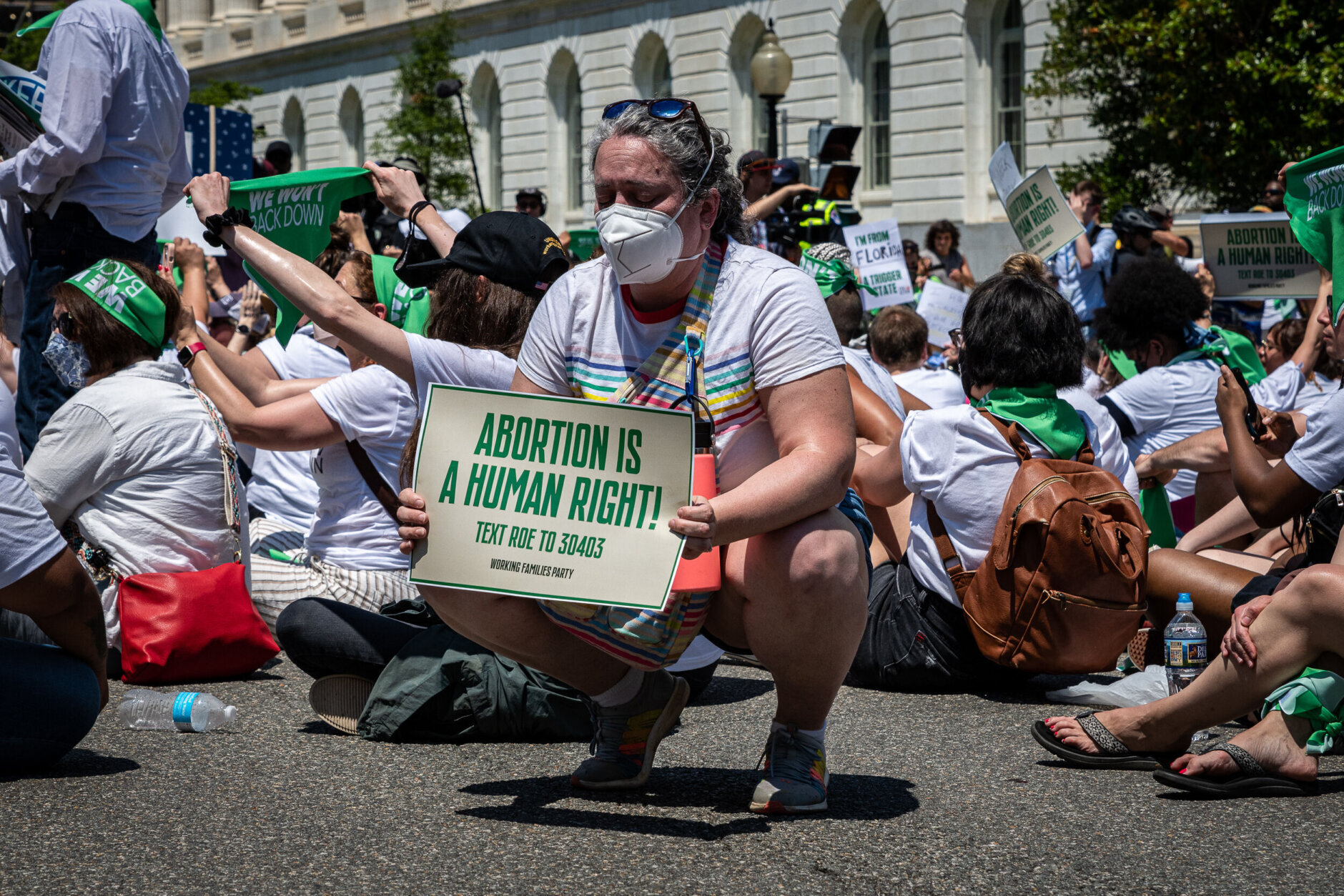 5/10
An abortion rights activists holds a sign while risking arrest at a sit-in. (WTOP/Alejandro Alvarez) 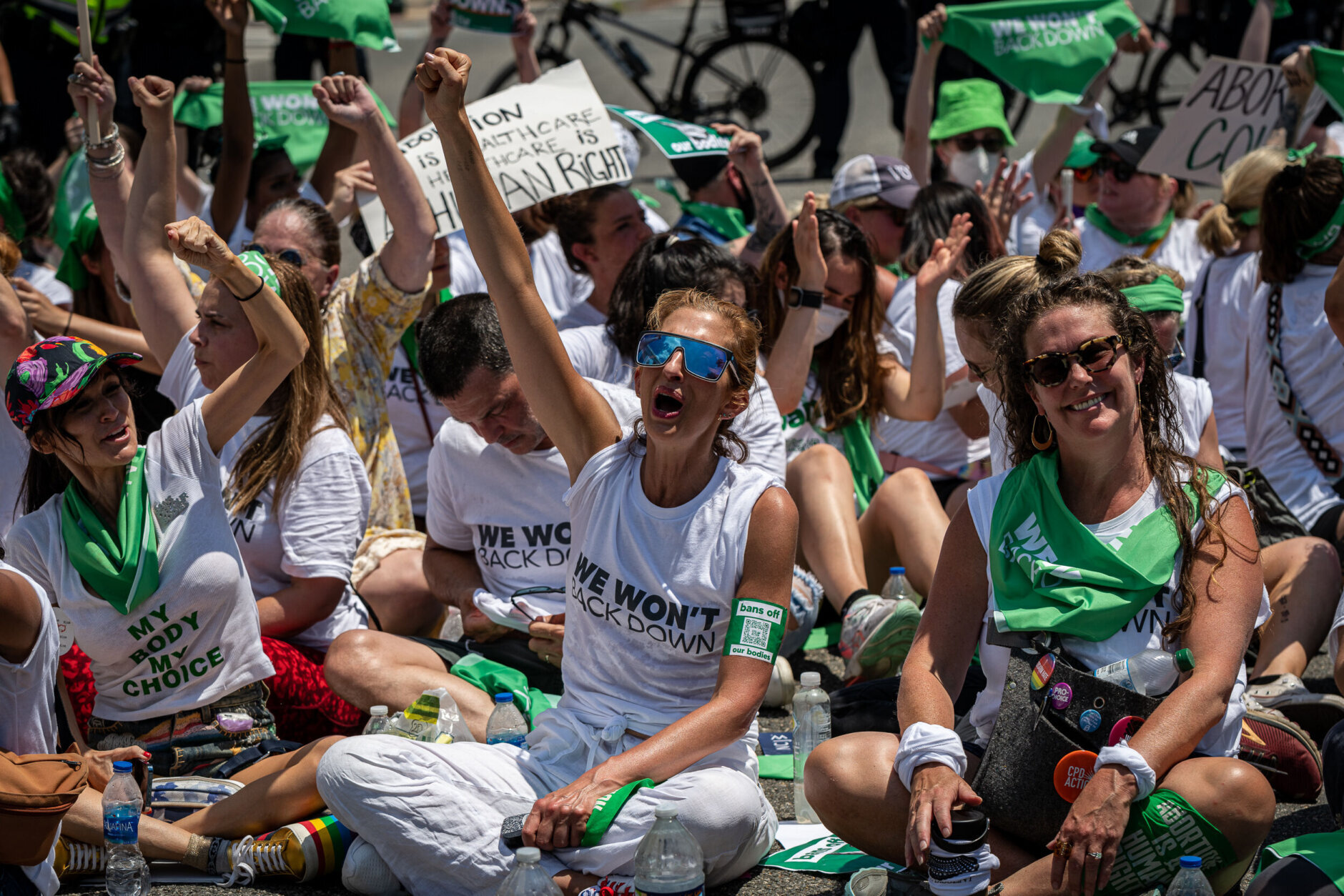 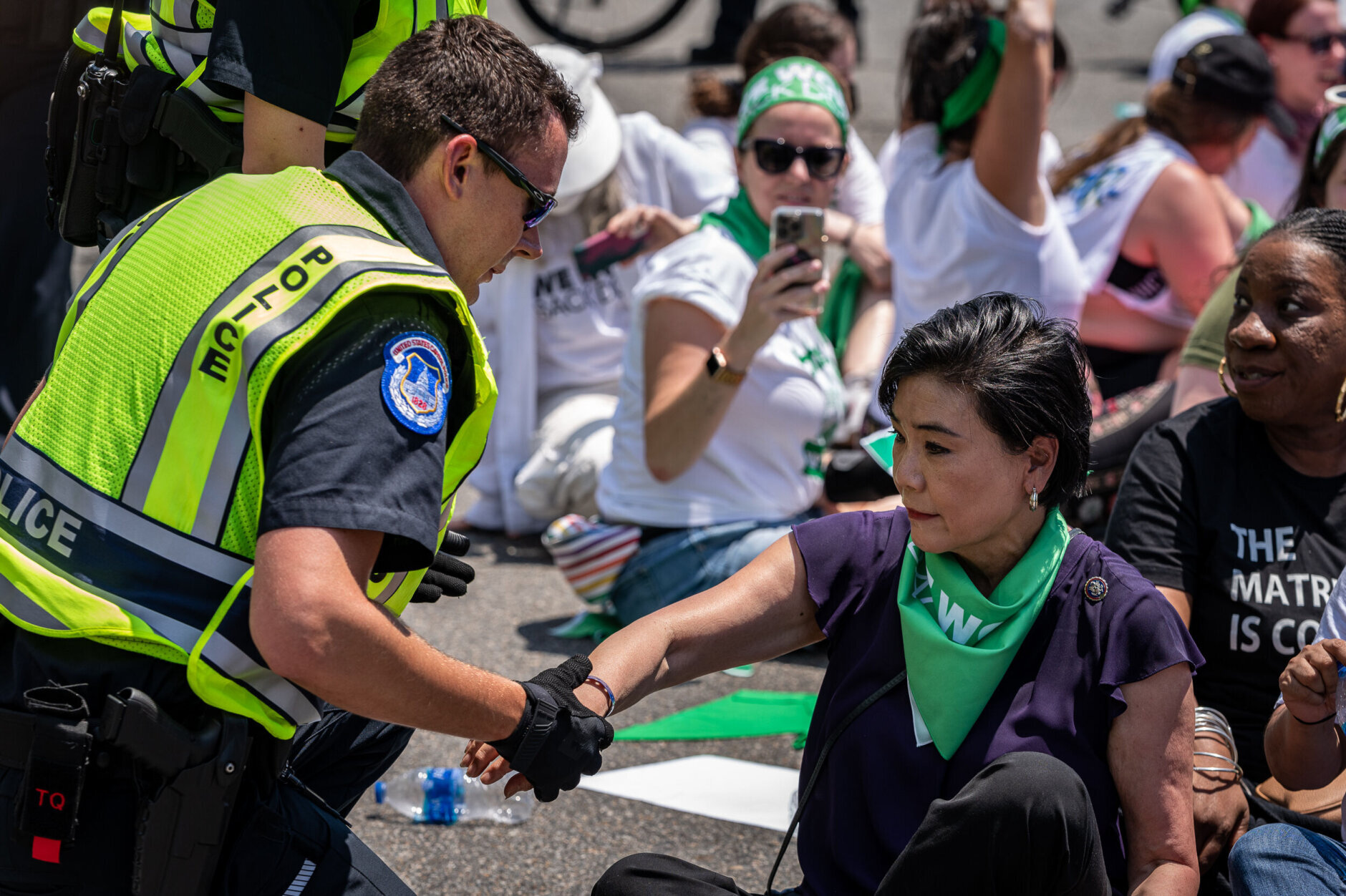 7/10
U.S. Rep. Judy Chu is arrested after participating in a sit-in for abortion rights on Constitution Avenue. (WTOP/Alejandro Alvarez) 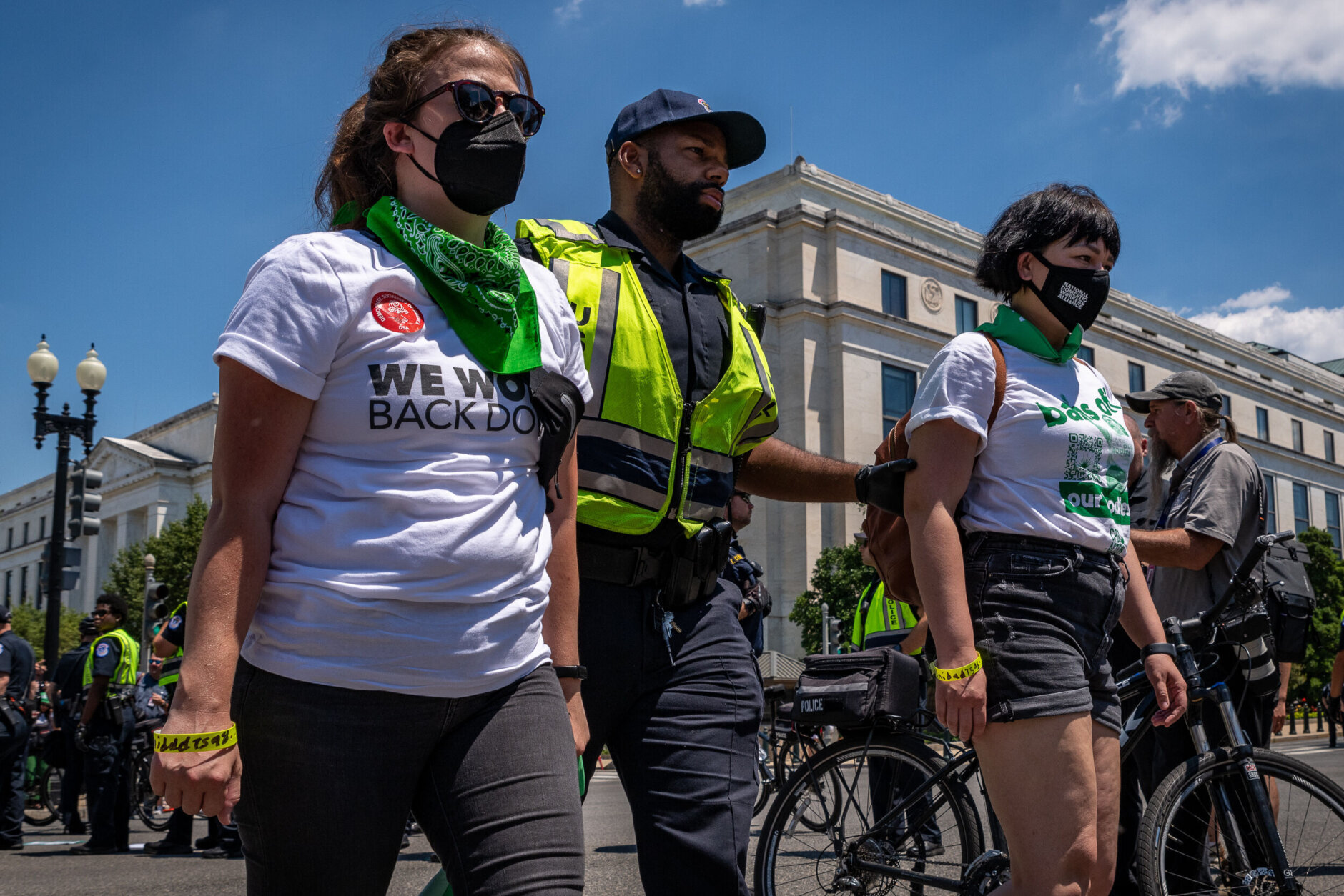 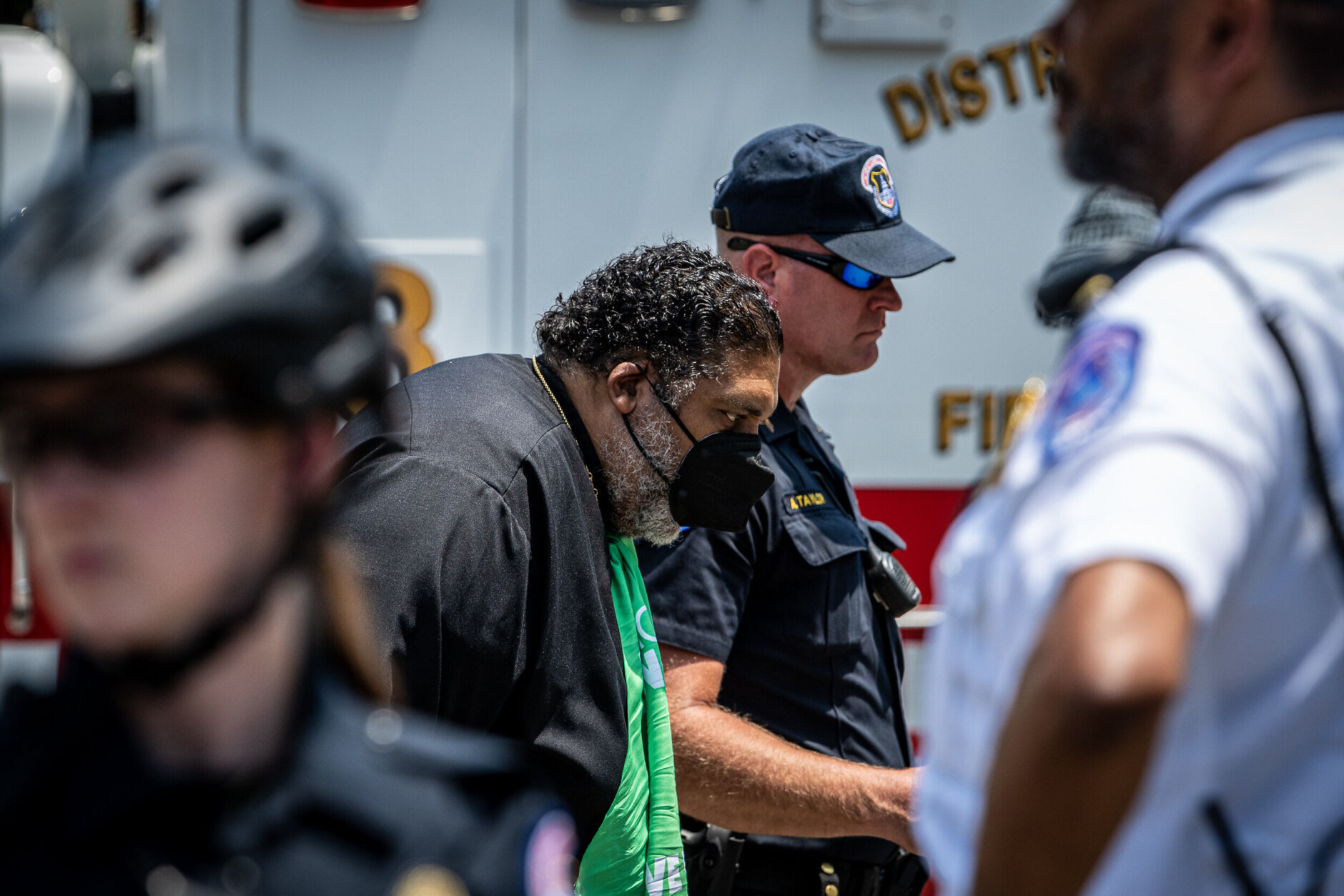 9/10
The Rev. William Barber II is arrested after crossing police lines to join an abortion rights sit-in near the Supreme Court. (WTOP/Alejandro Alvarez) 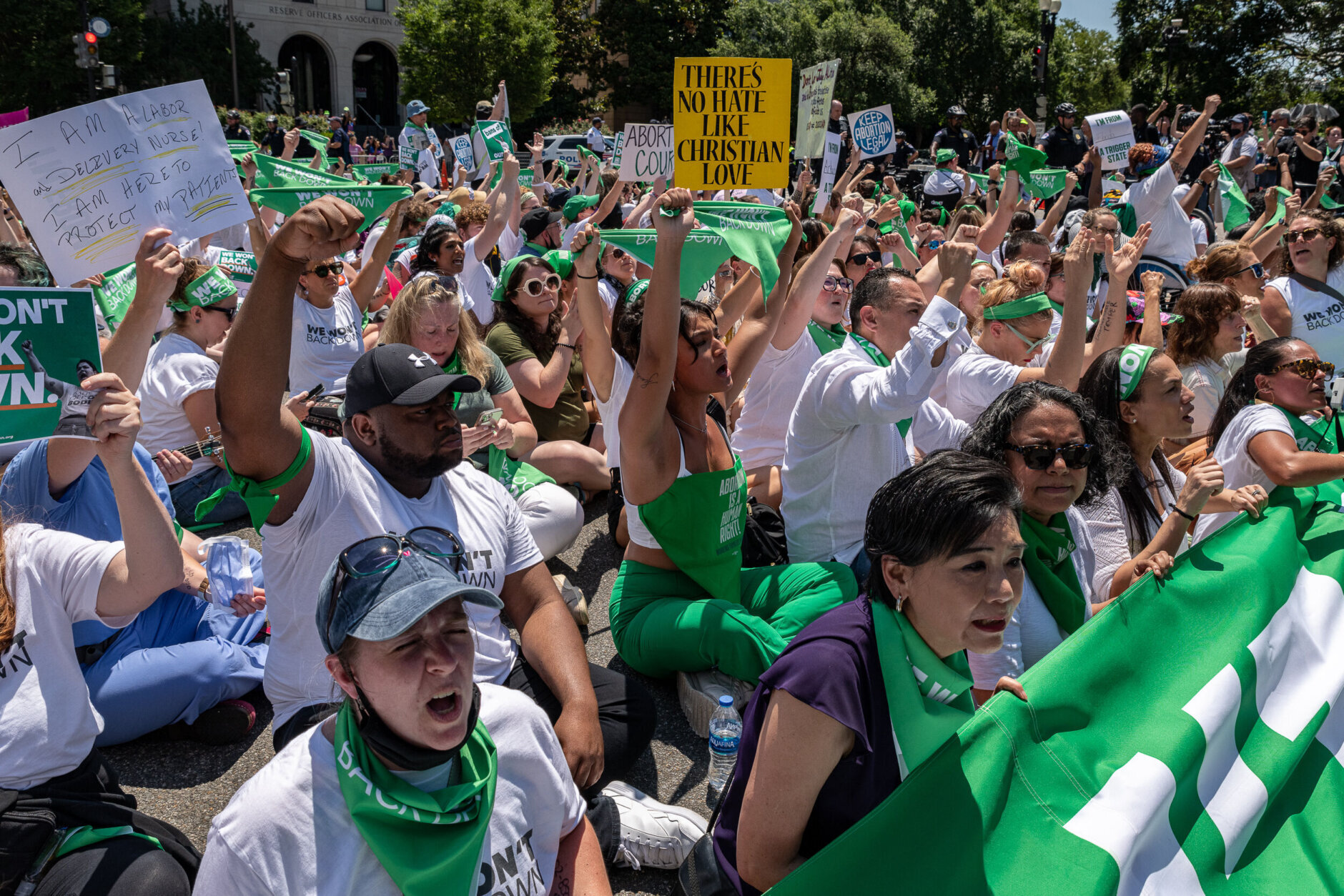 10/10
Nearly 200 people were arrested. The sit-in lasted over an hour. (WTOP/Alejandro Alvarez)