Passersby who sprang into action to help people in need received “Lifesaving Awards” on Friday from the U.S. Park Police. 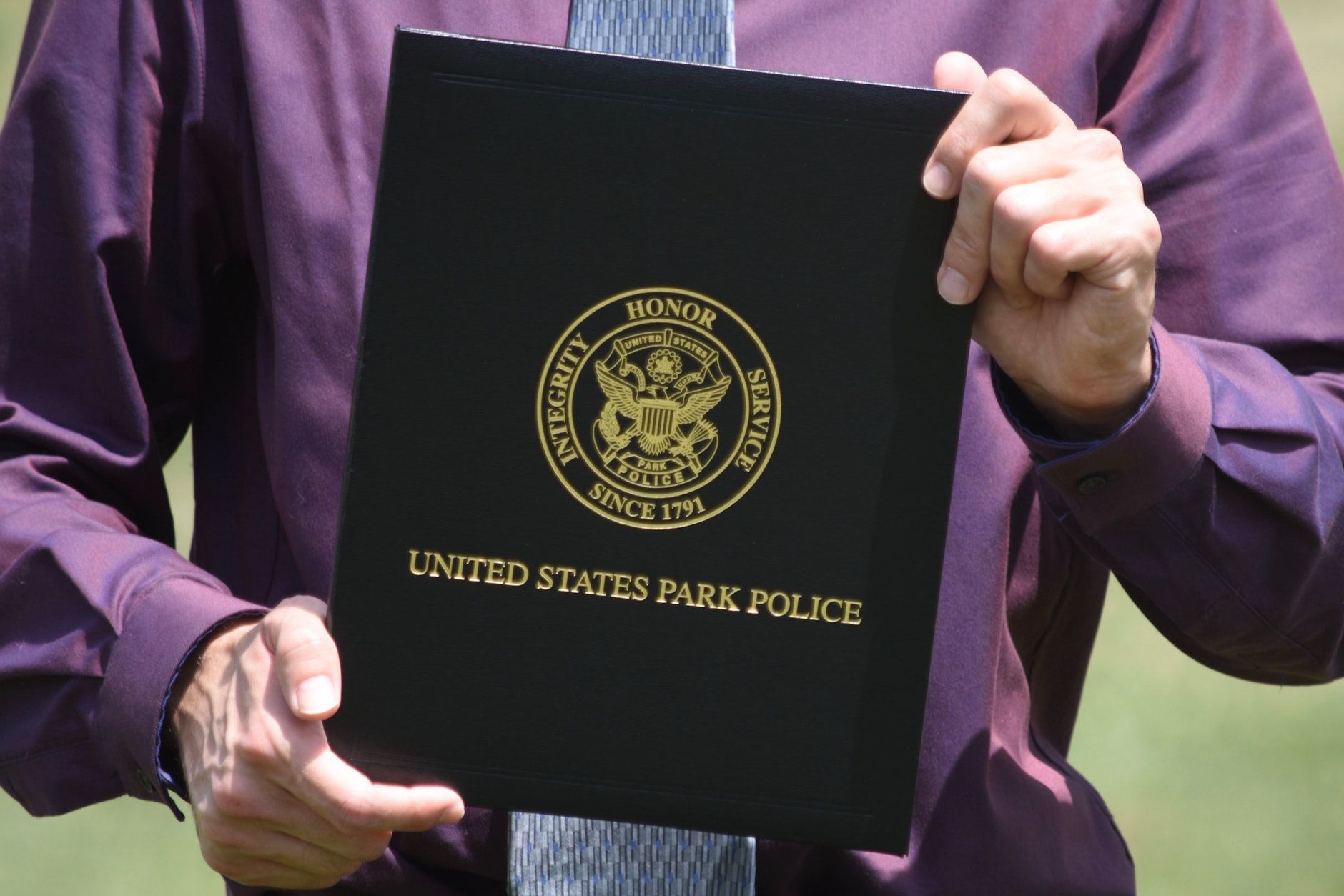 One situation involved a wreck on the Baltimore-Washington Parkway in April, and another involved WTOP’s Dave Dildine saving a woman who was at risk of dying in the freezing waters of Rock Creek in January.

“Mr. Dildine was taking pictures of the snowy conditions in Rock Creek Park [and] in the empty landscape, he heard the sounds of someone screaming. Mr. Dildine observed a woman in the freezing waters of the Rock Creek unable to get out,” Sgt. Eduardo Delgado said at the awards ceremony. 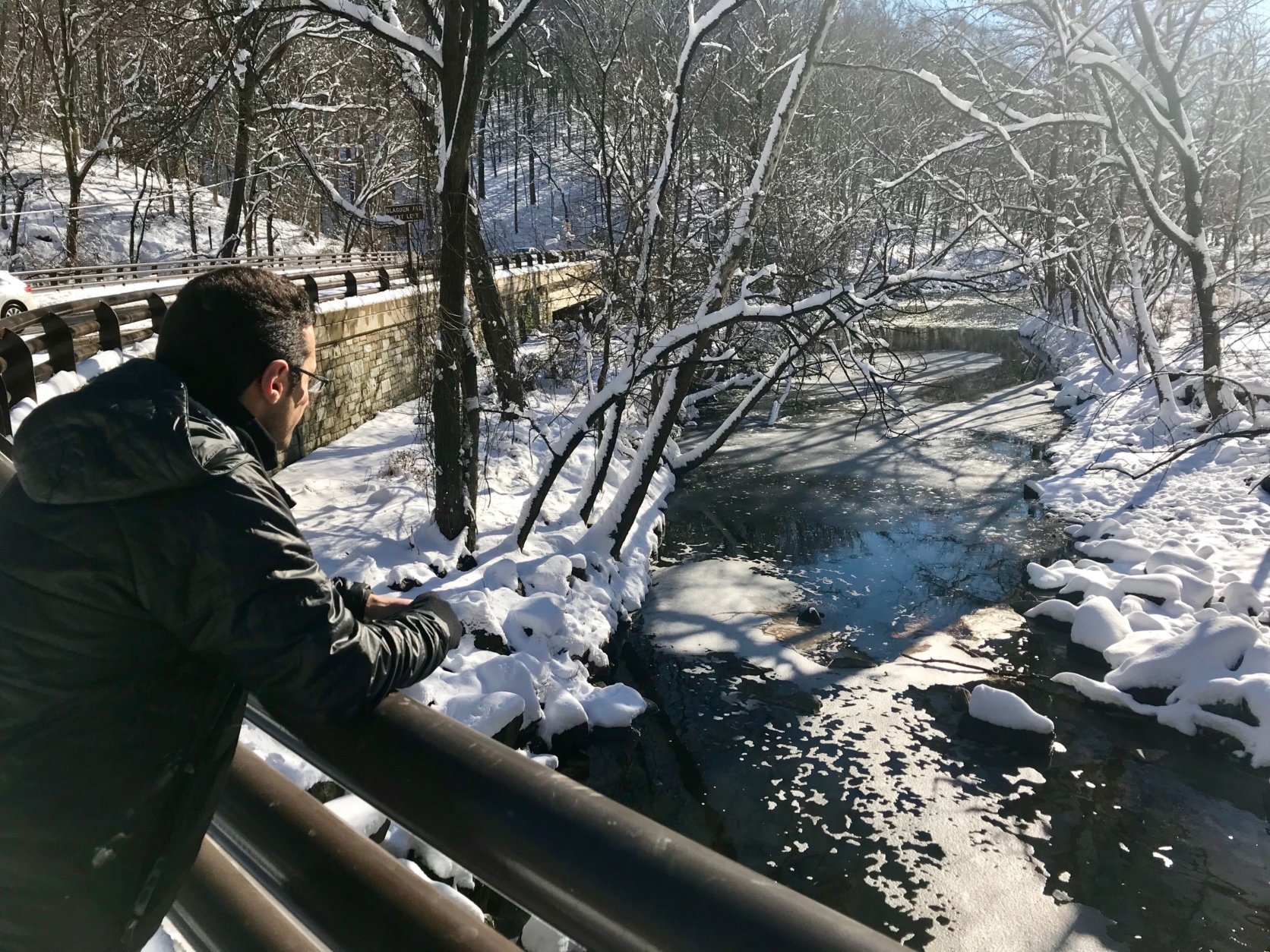 Dildine believes anyone with a shred of compassion would have helped as he did.

“In a major snowstorm, Sarah fell into a creek, I pulled her out, she lived to tell the tale,” Dildine said simply.

“Lifesaving Awards” were also given to Cary Caprio and U.S. Park Police Officer Valerie Streiff for their response to a serious crash involving an overturned vehicle in April. 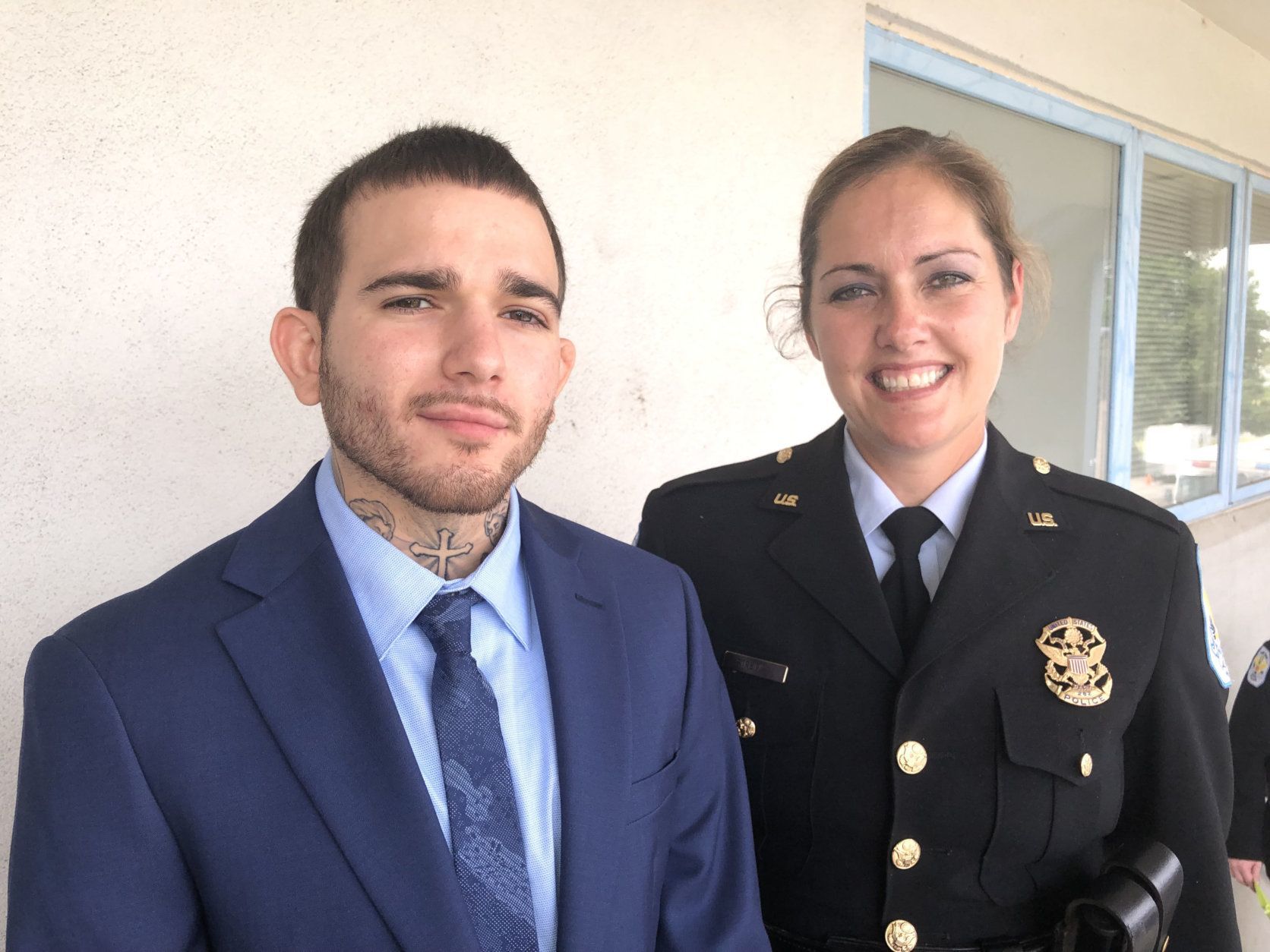 “I don’t have much medical training, but I have a little bit and I have a trauma kit in my car,” Caprio said.

One of the accident victims had severe lacerations to his neck.

“His throat, jugular, his arteries [were] all slit open, so I just did what I could to try to control the bleeding and then she came and took over,” Caprio said of Streiff, who is a patrol officer and also certified as an Emergency Medical Technician.

Doctors agreed the man would have died if he hadn’t received such quick appropriate care that included Streiff performing a procedure to open a collapsed lung.

“He didn’t think he was going to live,” Streiff said. “Before he passed out on scene, I told him he owes me dinner.” 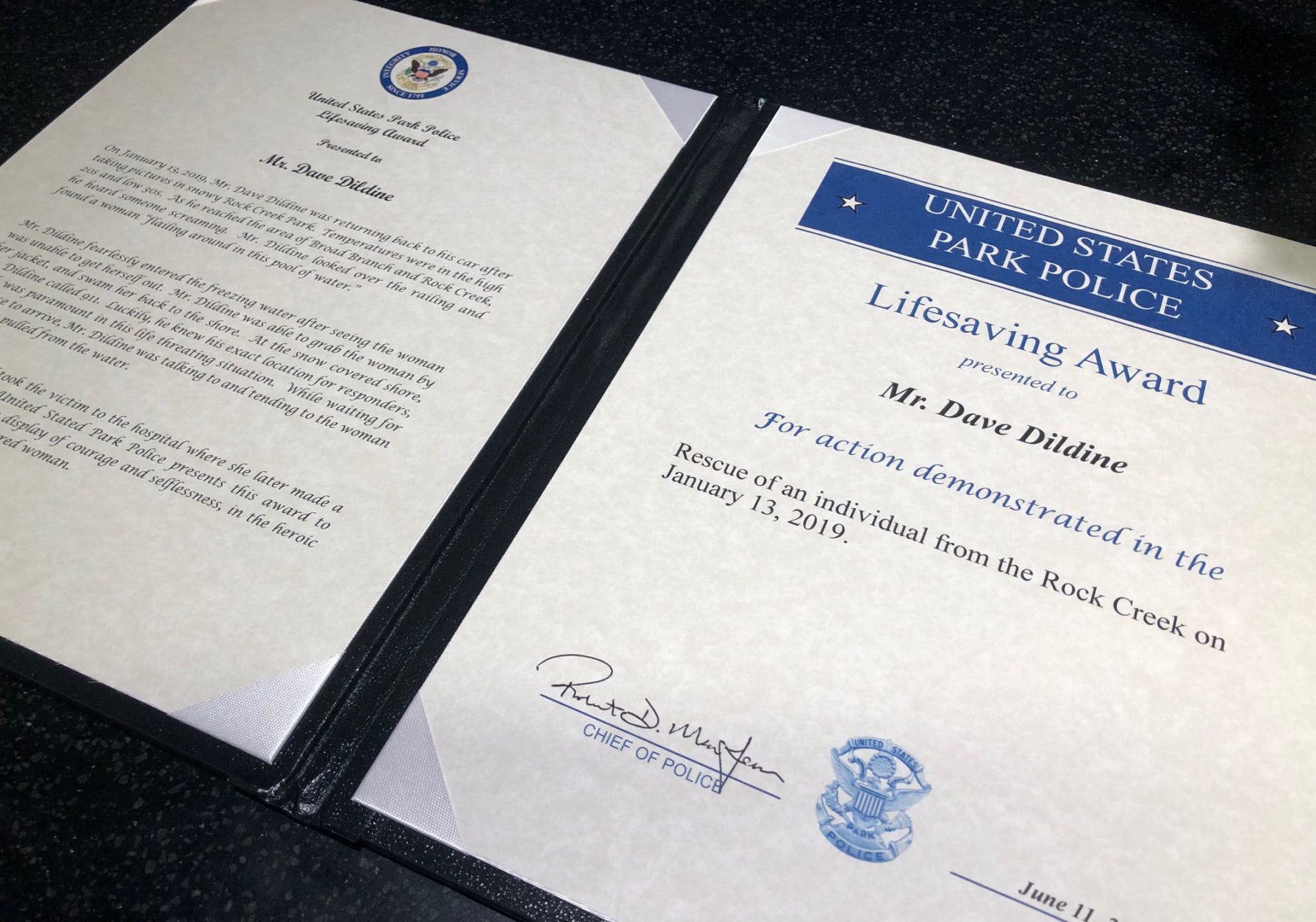 All three of the recipients seemed a bit self-conscious about being honored.

“I’m grateful and I’m glad I was able to save his life,” Streiff said. “It was my training — lots of training.”

Caprio said, “It’s something I’d want somebody to do for me … I was in the right place at the right time, and had a little bit of the training and the proper gear with me.”

Caprio keeps a trauma kit in his car because he is a special police officer in D.C. and believes anyone who carries a gun and badge should be prepared.

Hikers everywhere who follow trails might not realize exactly where they are if they get into trouble and need to call for help.

“This offers another chance to remind everyone of how important it is to be self-aware, to be prepared,” Dildine said. 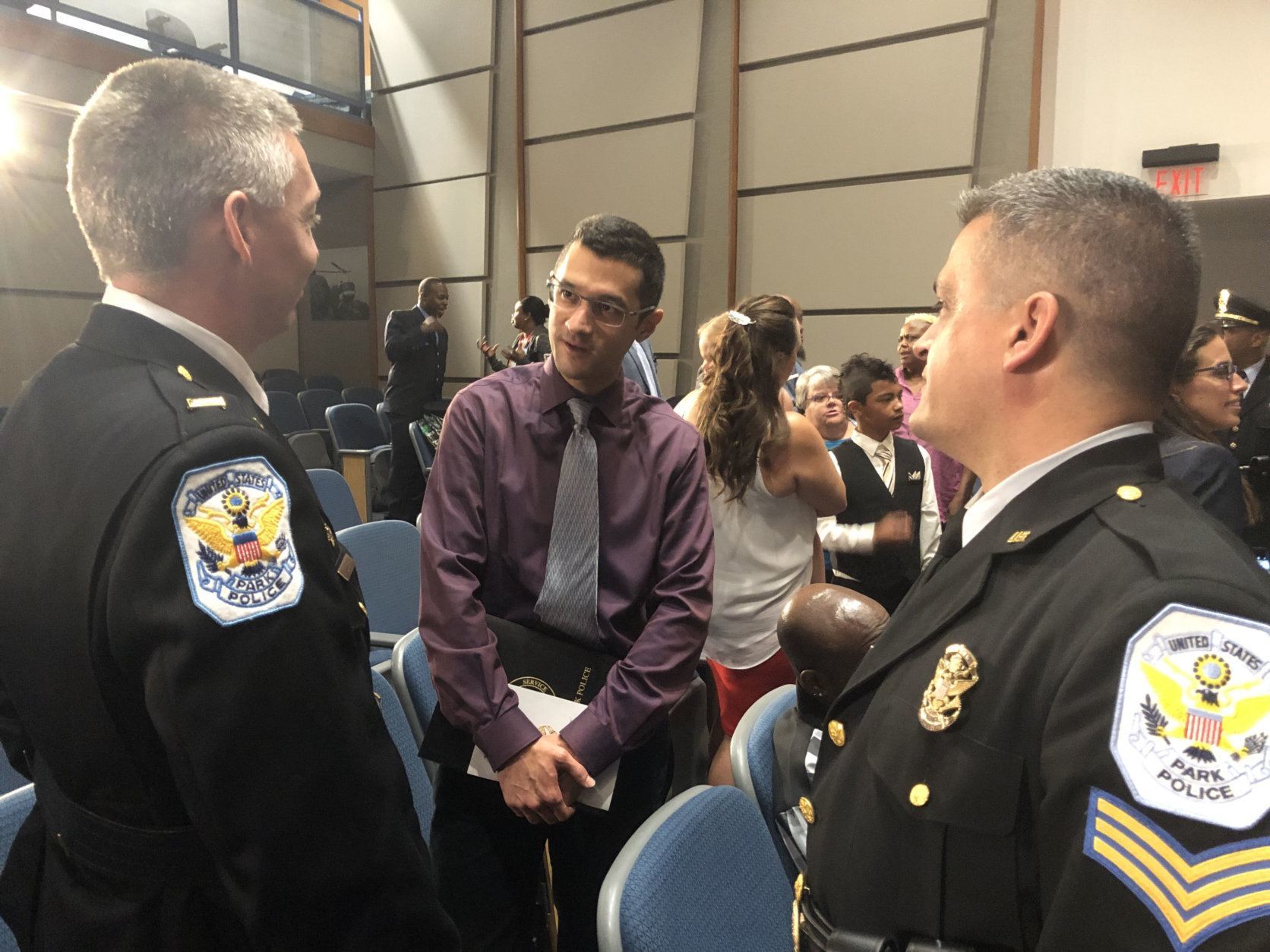 WTOP’s Dave Dildine was honored by U.S. Park Police for saving a woman who was at risk of dying in Rock Creek in January.

Asked about receiving the award, Dildine said he feels unworthy of the recognition, especially in the context of a ceremony that included the swearing-in of the Park Police’s newest class of recruits.

“Standing by those who commit themselves and who have taken an oath to do what I did — every day, they wake up and go into uniform,” Dildine said. “It’s humbling. I’m incredibly appreciative to be recognized by these folks. They do an amazing job every day.”