About 5,000 people made their way to Freedom Plaza on Pennsylvania Avenue — in the shadow of the Trump Hotel and just blocks from The White House — between 12th and 14th streets NW on Saturday night for the sixth annual Diner en Blanc.

The pop-up picnic — inspired by a similar event decades ago in Paris — requires its attendees pay about $50 for the right to bring their own tables, chairs, wine, food, place settings, tablecloths and of course, they must dress in white from head to toe.

What do they get in return? The chance to frolic on a late-summer night, with what turned out to be perfect weather, along one of the most iconic streets in the United States. 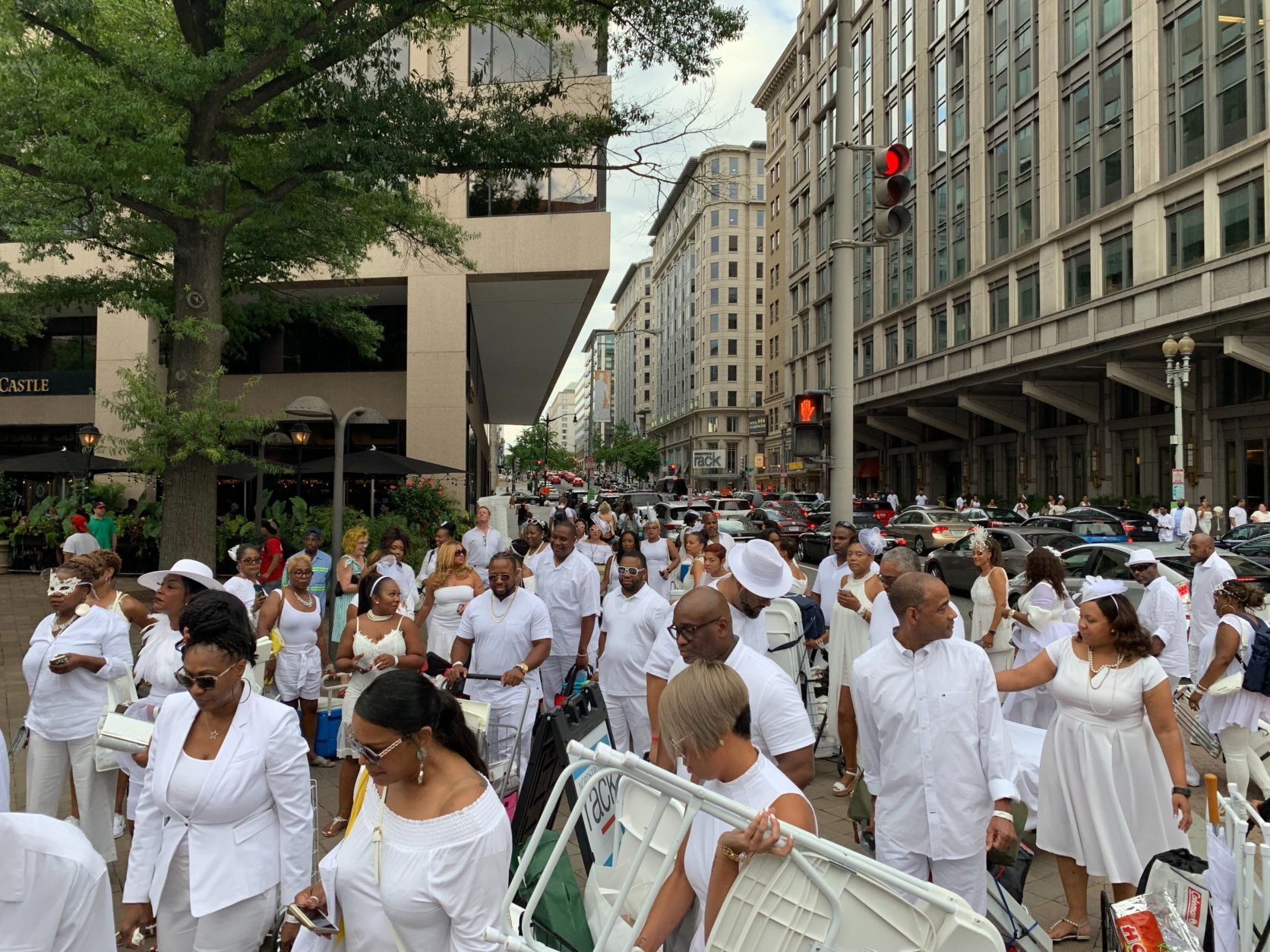 1/10
Partygoers carry their tables and chairs at the corner of Pennsylvania Avenue and 12th Street NW.

After the fifth edition of the party fell flat in Nats Park last August, Linda Davis, whose firm The Davis Group has organized all of the past local Diners en Blanc, said she learned that the event is better when it’s not contained in “a box.”

“Certainly,” Davis said, “Nats Park is a beautiful setting, [and] our thought was ‘who would not want to be in one of the nation’s iconic ballparks?’ We had to make the most of being within the bowl, and we had to make some adjustments. [The Nats] have certain guidelines that were probably not the best fit for this event.” 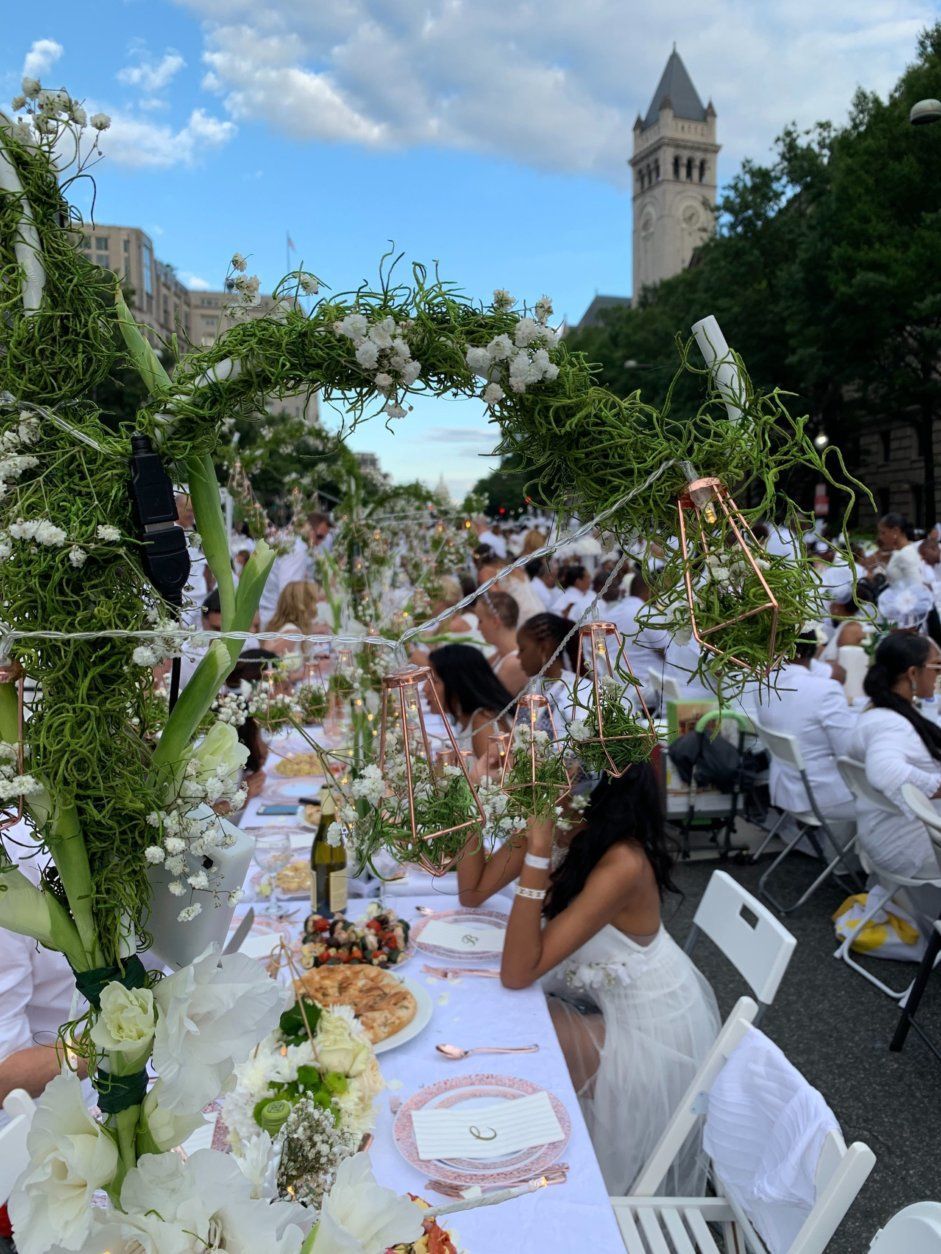 2/10
Some partygoers went all out.

As picnickers, who only found out the event’s location about an hour ahead of time, descended upon Pennsylvania Avenue from all directions starting around 5:30 Saturday evening, tourists and taxi drivers took notice. They asked partygoers about the occasion, and many stopped to take photos and gawk at thousands of people decked out in white. 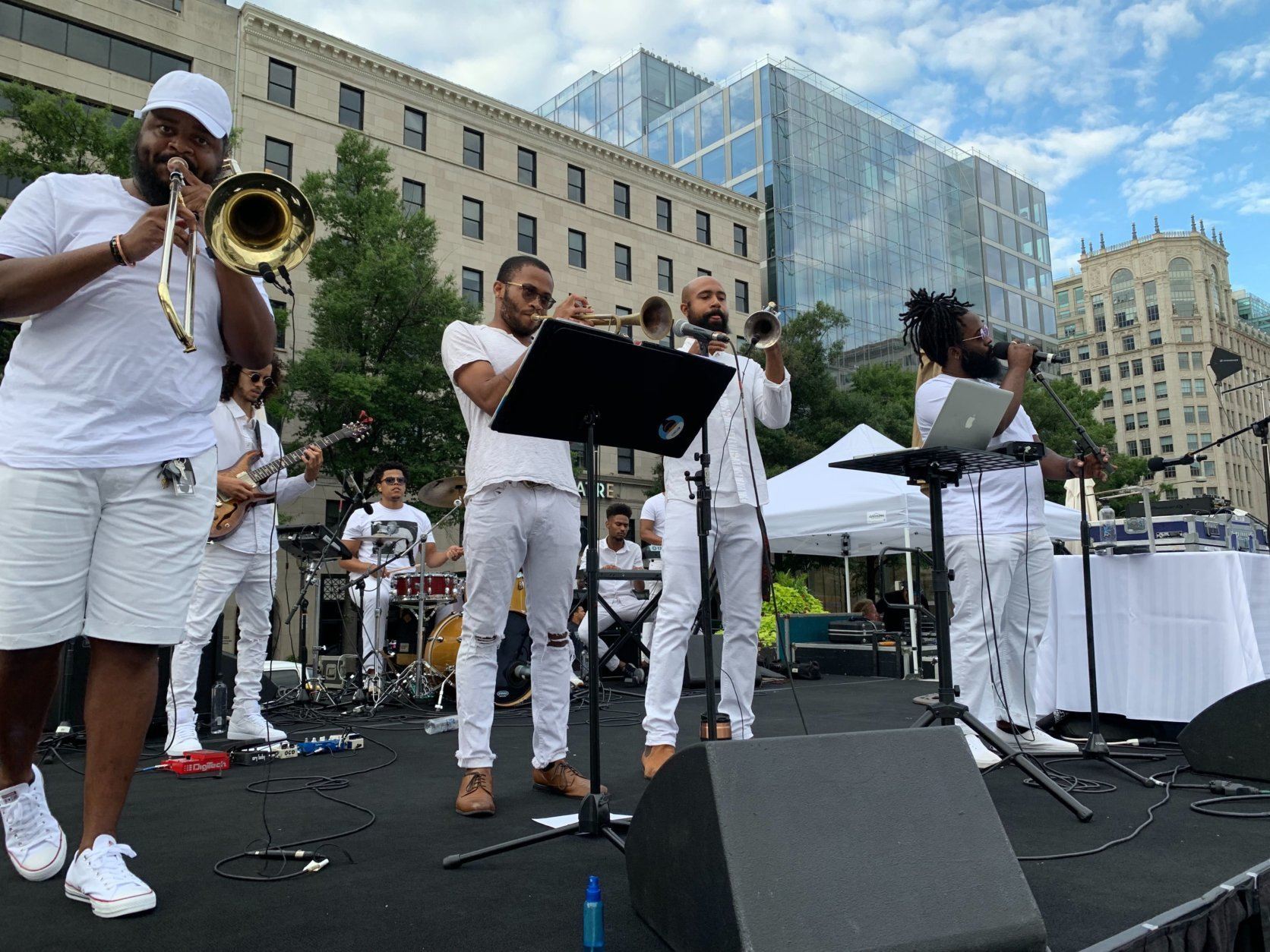 While the onlookers, dressed in T-shirts and shorts, stared, the attendees, some dressed in top hats and tails, many wearing sequins, others wearing dresses that could have been suitable for a wedding day, went about unfolding tables and chairs, stacking decadent cupcakes on three-tiered trays, building trellises and centerpieces and unfurling tablecloths. In the background, local hip-hop funk band DuPont Brass played. 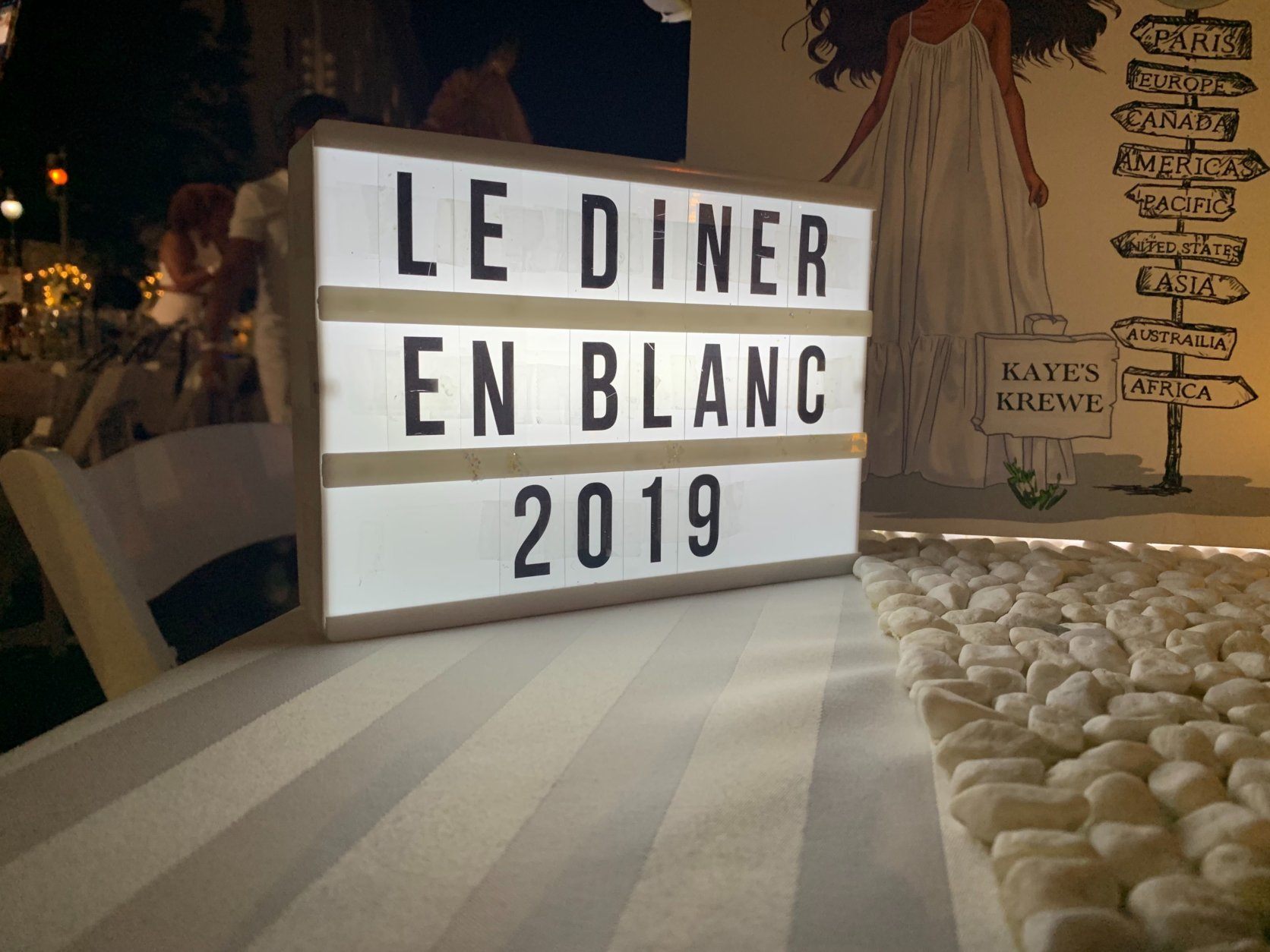 4/10
No doubt what event people planned all summer to attend.

Buffy Holmes came from Hanover, Maryland, near Baltimore, to attend her first Diner en Blanc. She got an invite from a friend in July, and the planning began. First came some orders from Amazon and some trips to purchase decorations and place settings from TJ Maxx.

“I’ve never been before, and I didn’t have those things in my arsenal, so it got pretty expensive,” she said. “I think I did pretty good, but there are some really elaborate ones, so I’m taking notes and I plan to come back bigger and better.” 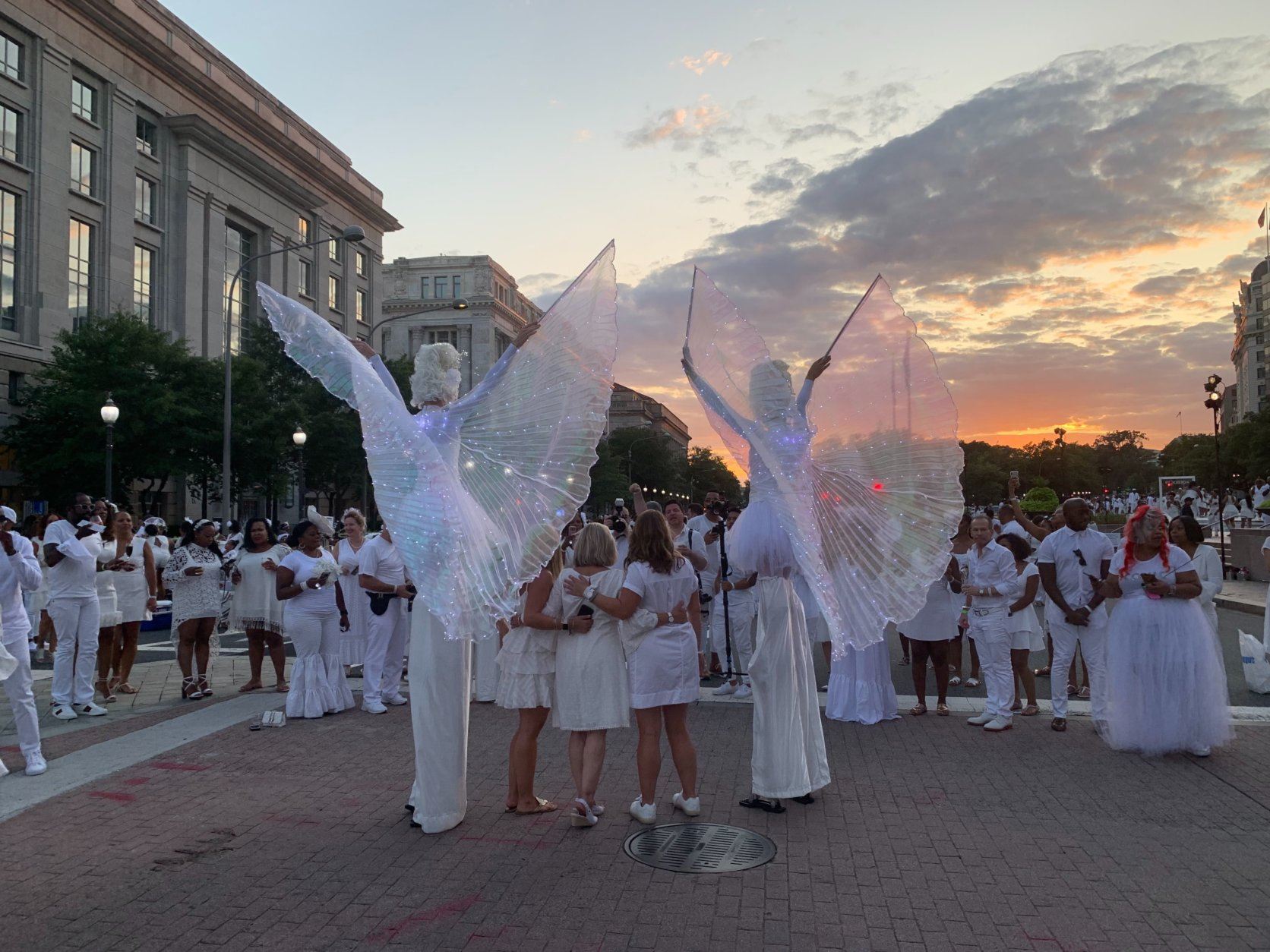 5/10
One of the top attractions was the photo-op with angels on stilts.

All the attendees enjoyed the ceremonial kickoff of the night, a celebratory twirl of napkins, and as dusk settled, matches were struck and sparklers were lit, so the party could begin in earnest.

The Instagram-friendly event afforded endless photo ops, including a chance to pose with a pair of women on stilts dressed as angels. The women towered above everyone, easily taller than a basketball hoop.

“It was just awesome,” said Nadene Howard of District Heights, Maryland. “She had to be 10 feet tall. It’s a part of the experience. This is really nice. That’s what really matters. I’m enjoying myself.” 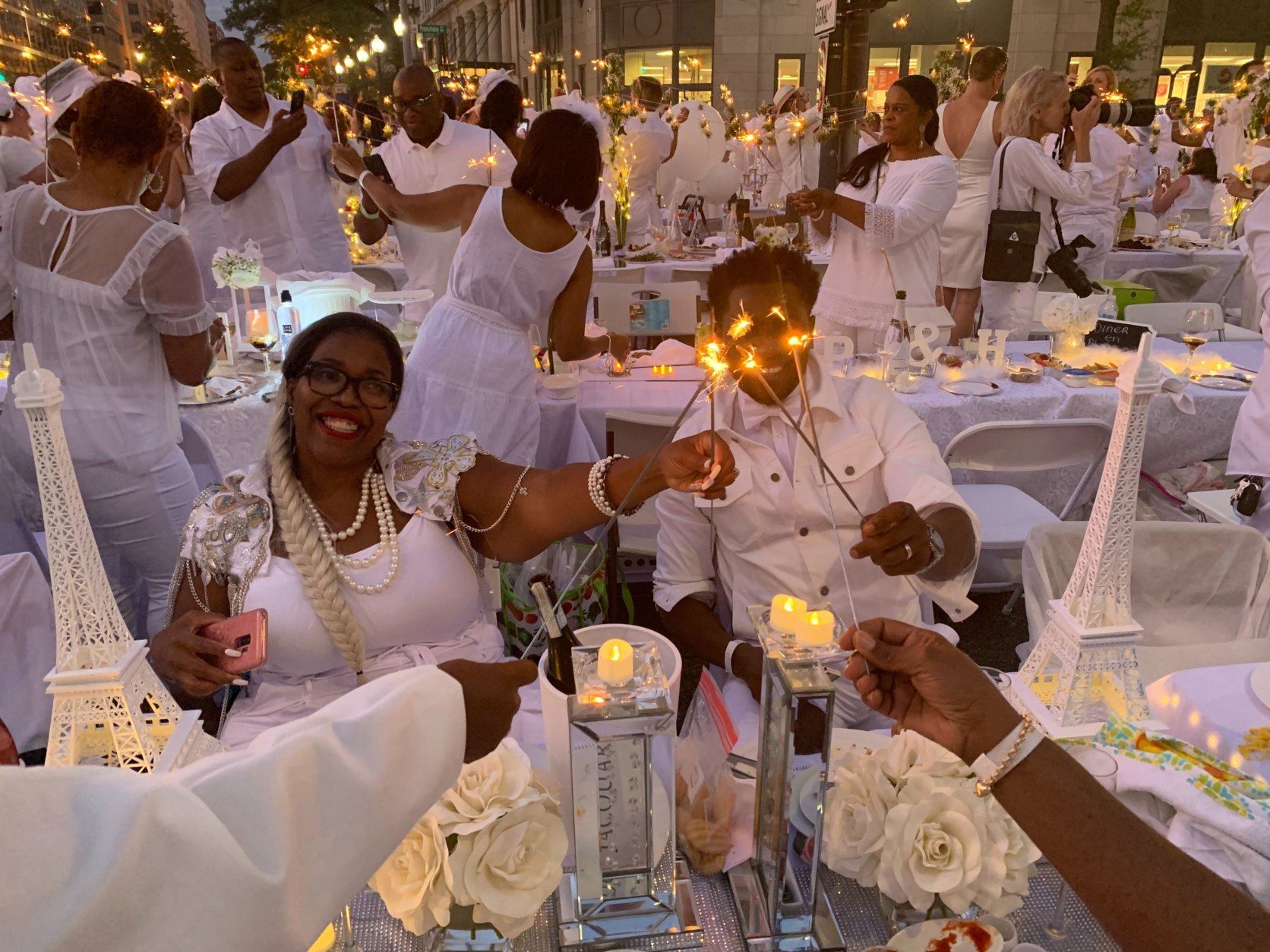 6/10
As dusk settled, everyone in attendance lit sparklers.

Howard said she was drawn to the exclusivity of the event, which does keep first-timers in suspense as to whether they’ll be invited.

“You never know when it’s happening unless you know someone who’s already attended the event and they sponsor you. For years I’ve been seeing this and I’m like ‘I want to get invited to this event, how are all these people invited to this event?’ It’s exclusive, that’s why I like it. For me, it’s an experience, almost like a festival.”

If Howard hadn’t been in Downtown D.C. on Saturday, she said, she would have been home with her son. 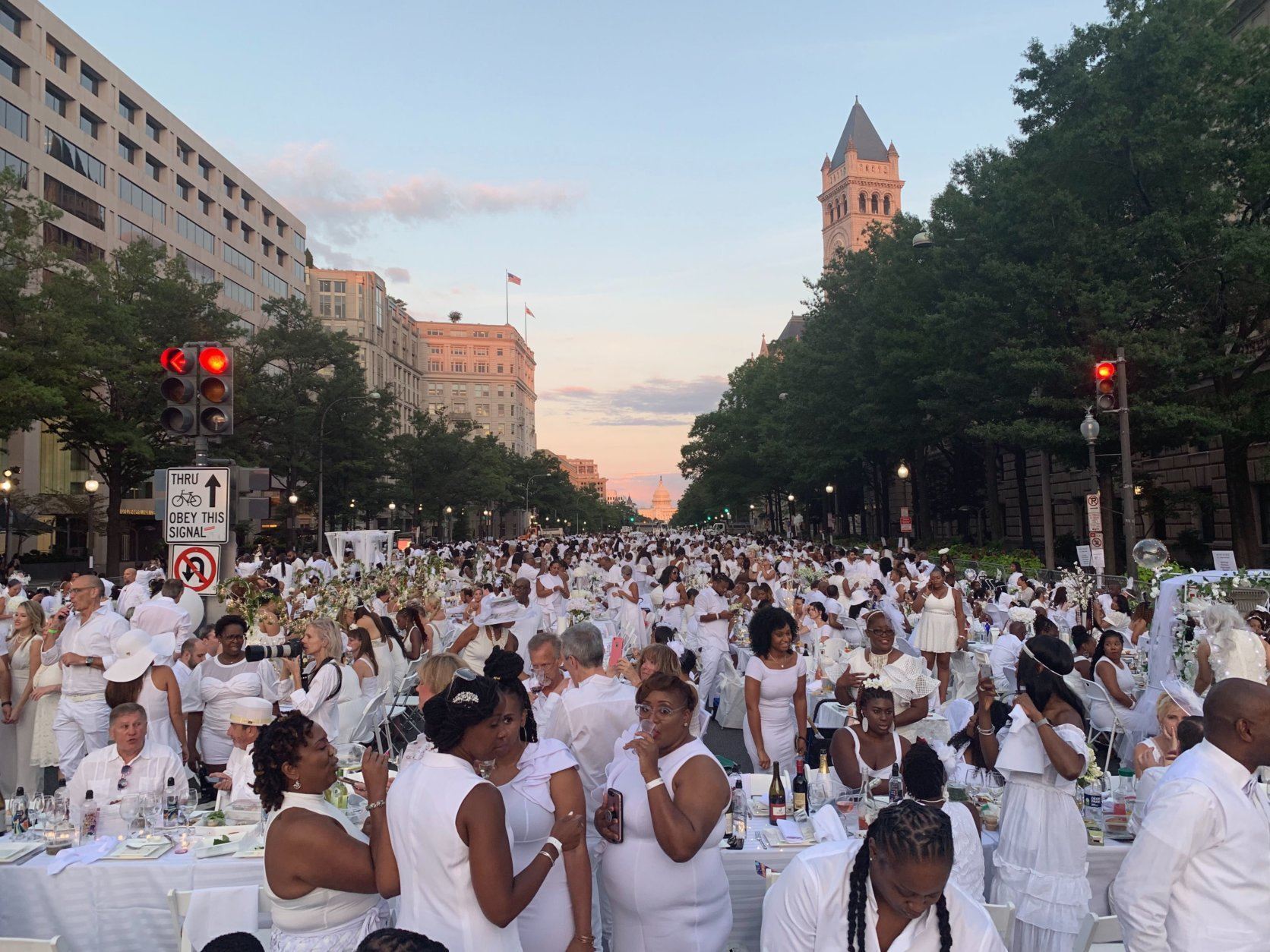 Jared Evans, of D.C.’s Brookland neighborhood, is a veteran attendee. He said he was disappointed with last year’s party at Nats Park.

“Compared to last year, this year is 100% better,” he said. Evans, dressed in an all-white romper with short pants, said he was looking forward to the event and he couldn’t have been happier with how it turned out. “To have this environment, see all this excellence, all this black excellence in D.C., it’s just a great experience. We’re right here on Pennsylvania Avenue, America’s Avenue, having an all-white dinner. You can’t buy this experience.” 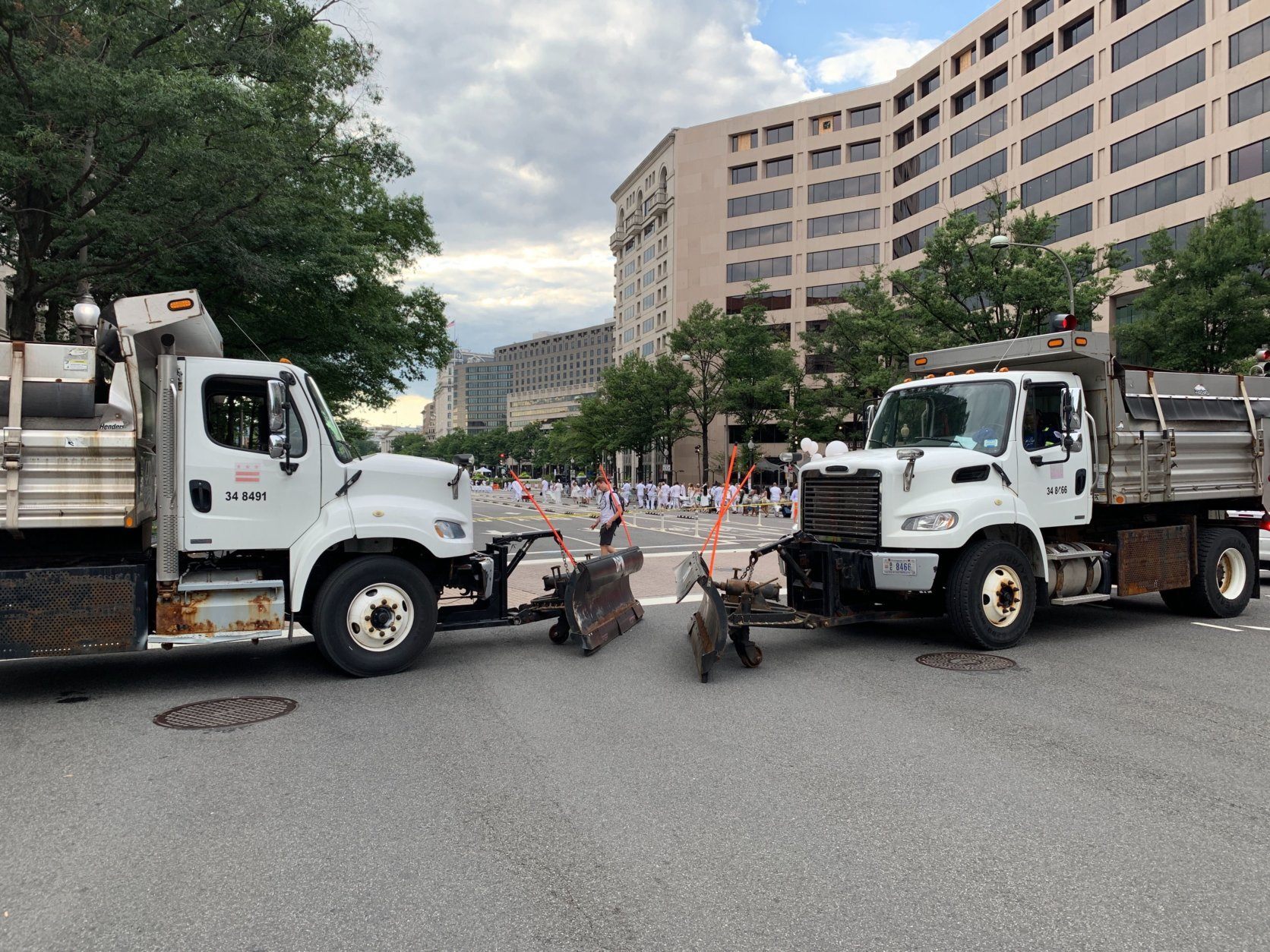 8/10
Salt and plow trucks lined the cross streets of Pennsylvania Avenue as an added security measure.

Davis, the event’s promoter, said security is an important consideration for an event that attracts thousands of people to a contained area. But most of the revelers said they felt safe, and the security checkpoints and massive road-salting trucks more familiar with Pennsylvania Avenue’s cross streets in January were an understandable and minor inconvenience. 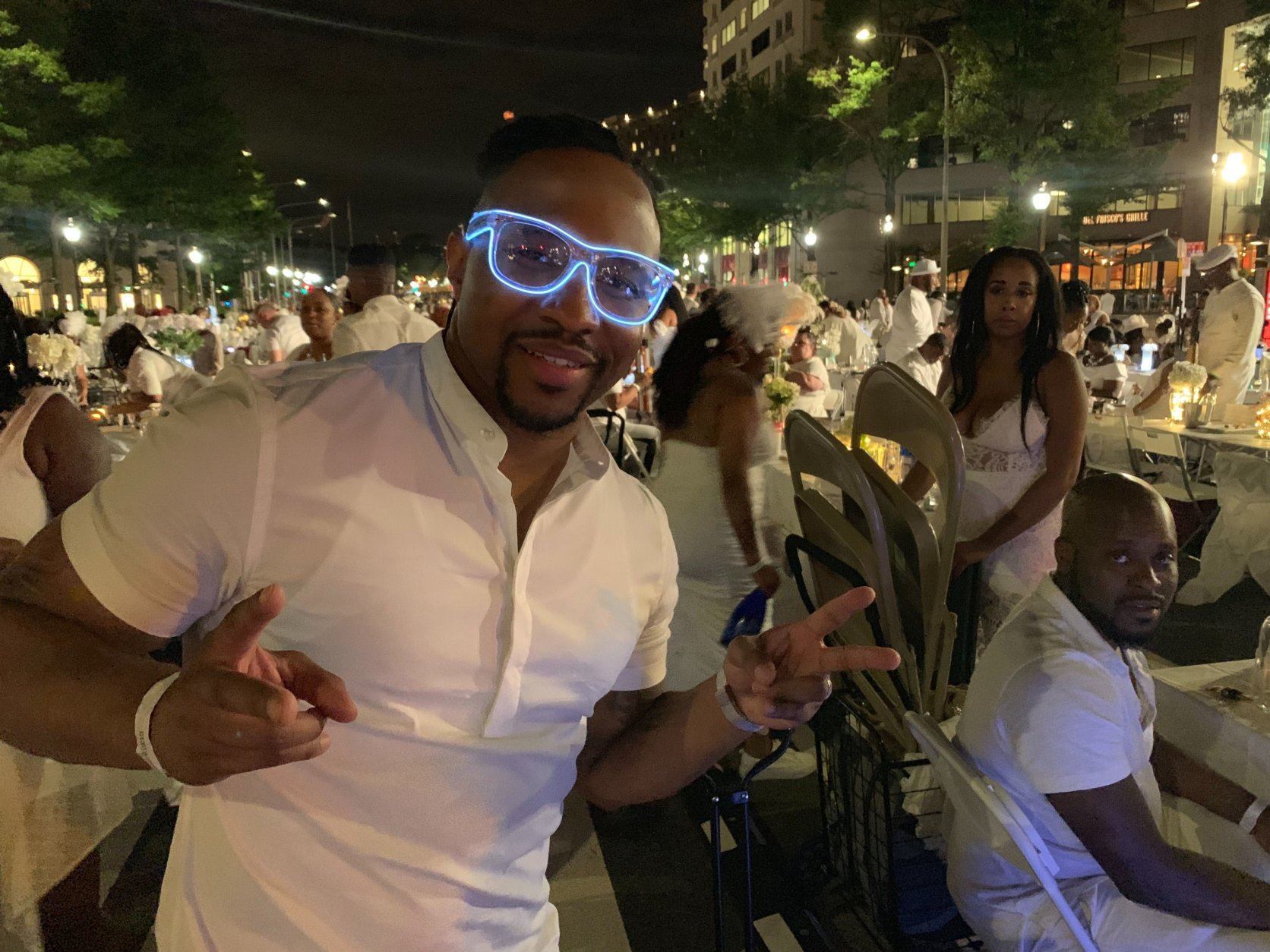 “It did come into my mind earlier, what would I do if I heard gunshots?” said Ayan Ali of D.C. “But I said to myself ‘don’t go there.’ My anxiety today was more along the lines of ‘I want my table to look cute. I can’t let crazy people get me down, I have to live my life.'” 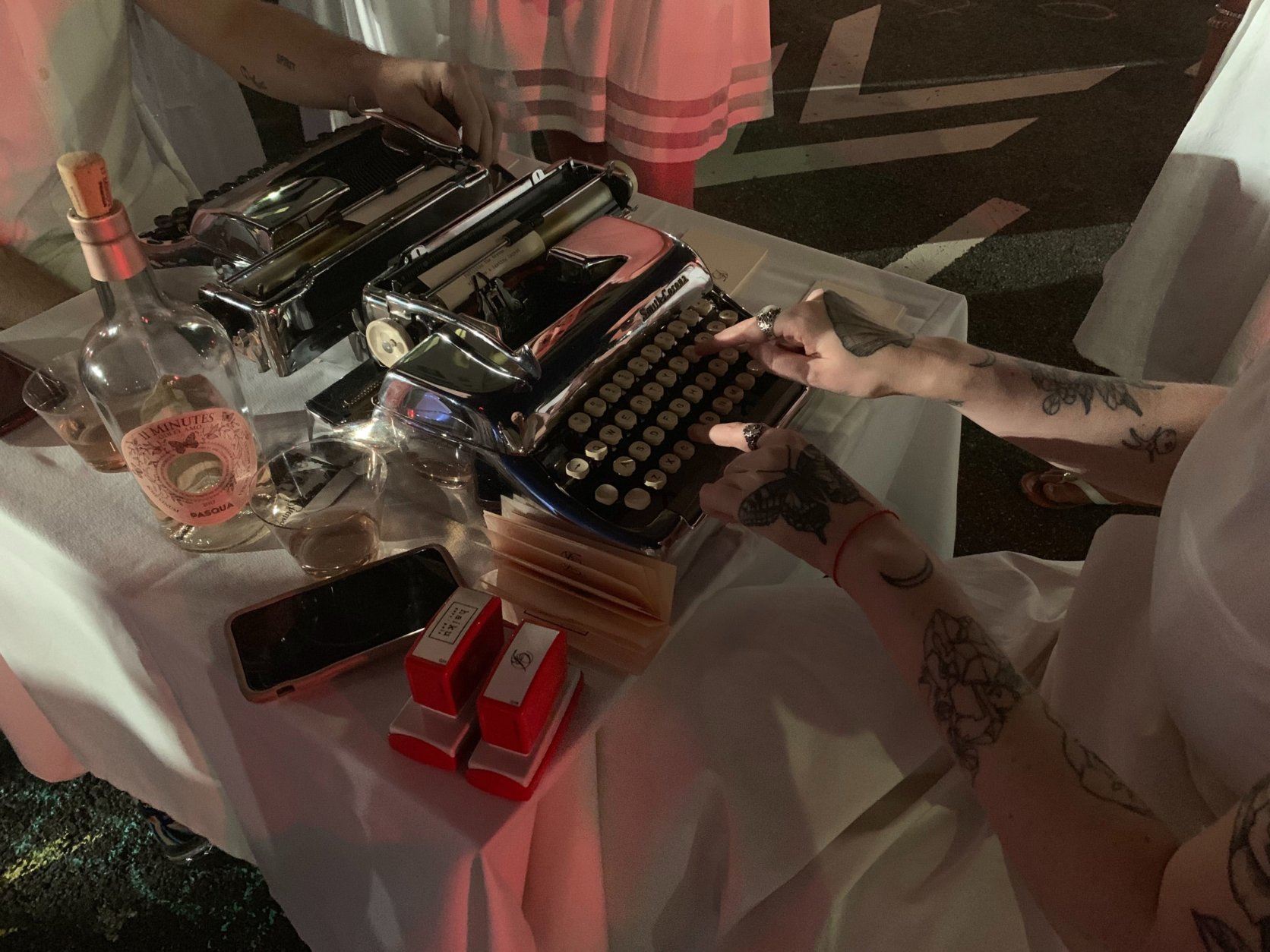 While waiting in line for a bespoke, on-the-fly Haiku, Kendal Wade of Prince George’s County said he was choosing to focus on an event where “the only color that matters is love.”

As far as security concerns go, Wade, a one-time candidate for sheriff, said, “you always have to hope for the best, but prepare for the worst. It’s unfortunate that those thoughts and planning have become a part of these types of events. But we can’t live in fear. We want to continue to live our lives.”

Instead Wade said, he chose to focus on “a very beautiful evening, right between the White House and the U.S. Capitol. You couldn’t ask for a better opportunity.”