If you need extra space in a SUV or crossover you usually find a large SUV with a thirsty V8 built on a truck frame. But GM has a bigger midsize crossover that has lots of space for seven or eight and rides, more like a car. The second generation Traverse is bigger and now packs more luxury.

The redesigned interior is a big improvement with nicer materials used throughout the cabin. But Chevy needed a more luxurious version of the Traverse. So now Chevy has a new top model, called High Country, which slots above the Premier or LTZ in older Traverse trim levels.

Think of it as the Chevy version of GMC Denali line. Prices are also higher, about $54,000 when you choose the High Country model. Options are limited to rear seat entertainment system for about $1,795 without DVD, or $1,995 with a DVD player. While the price seems steep it’s a bit less than the Buick version of the big crossover. 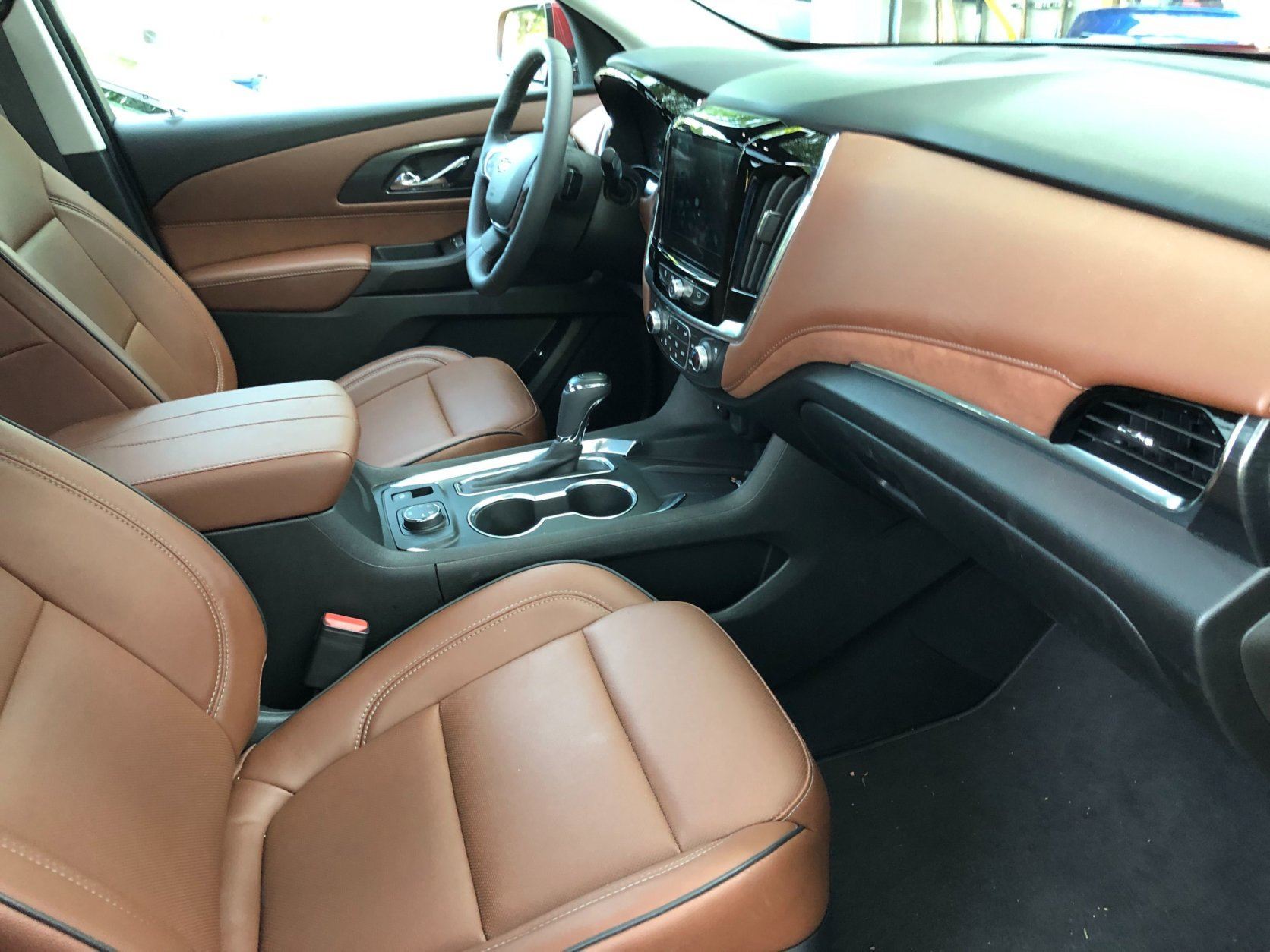 The front seats are heated and ventilated with power adjustments for driver and passenger. There’s marked improvement with leather quality that’s more upscale than before. 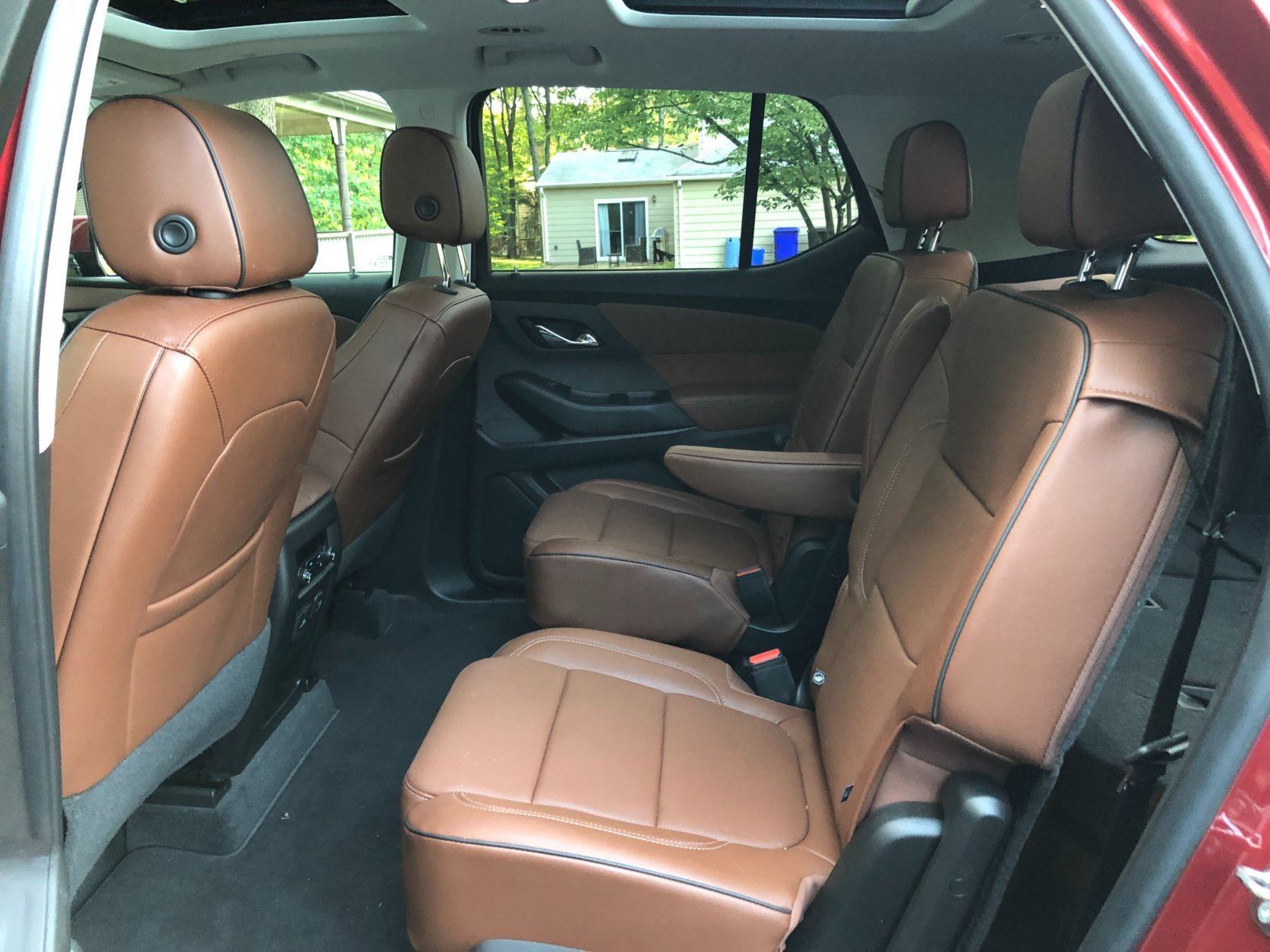 You can access the third row by snaking through the middle row seats or flip a chair forward and crawl in. You have a surprising amount of storage space with all the seats in use. There’s even extra storage under the floor. 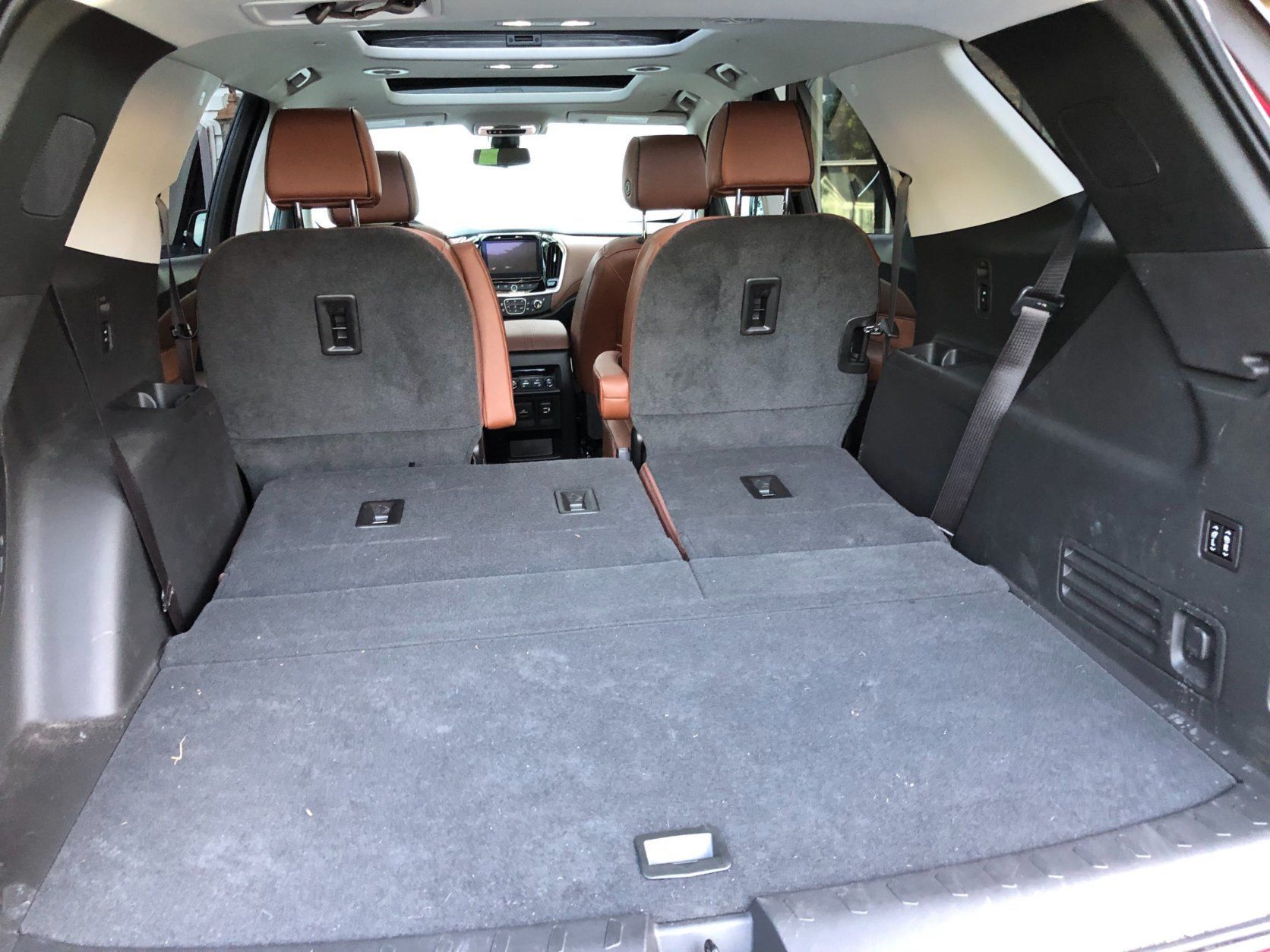 If you don’t need the third row, it quickly folds flat for extra storage space. 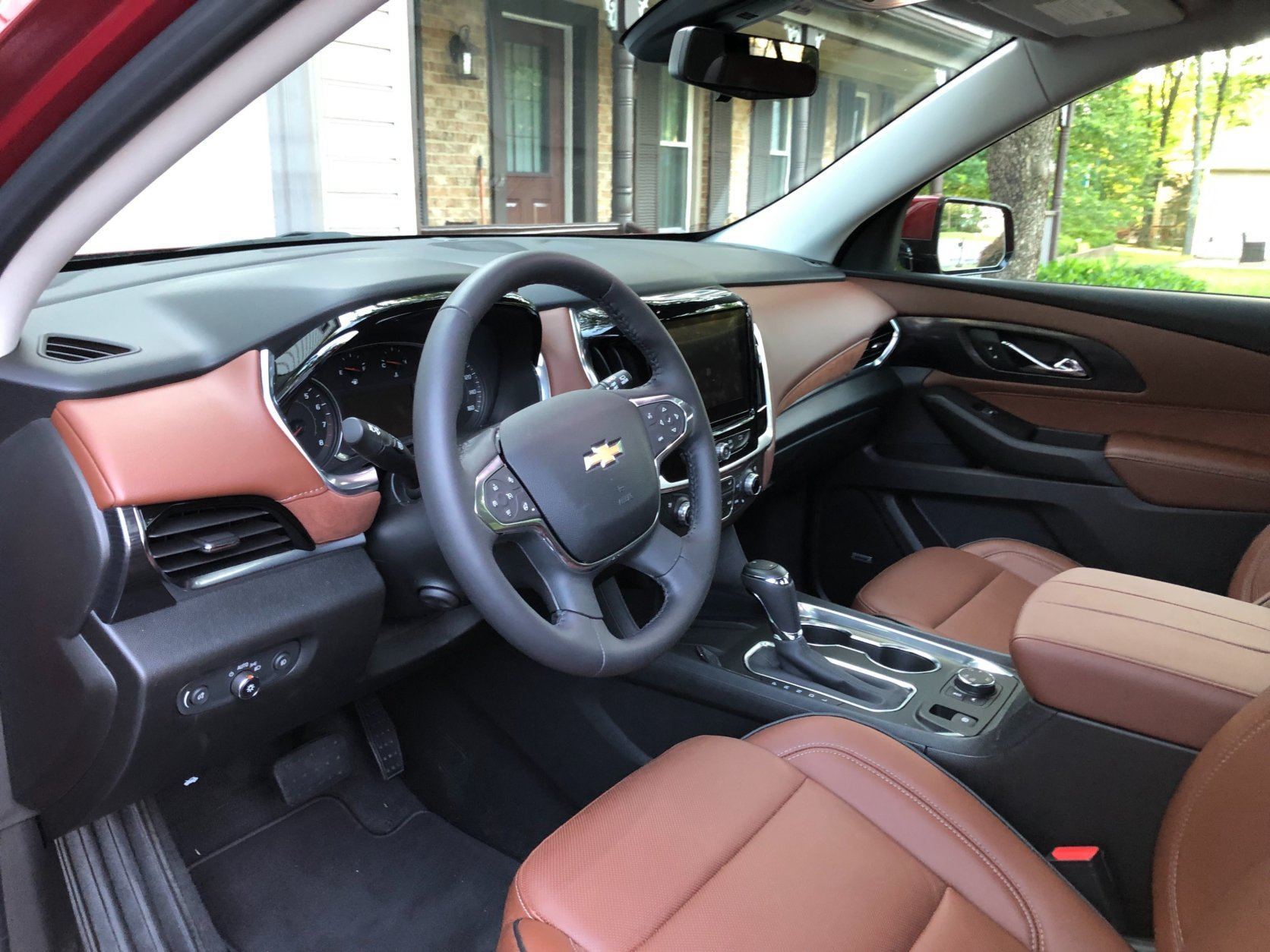 The MyLink system has a large 8-inch touchscreen and rearview camera with multiple views to help with parking. There are still knobs and some buttons for many of the controls. The Traverse comes with Apple Carplay and Android Auto capability and has a 4G LTE hotspot and loads of USB ports for multiple devices. 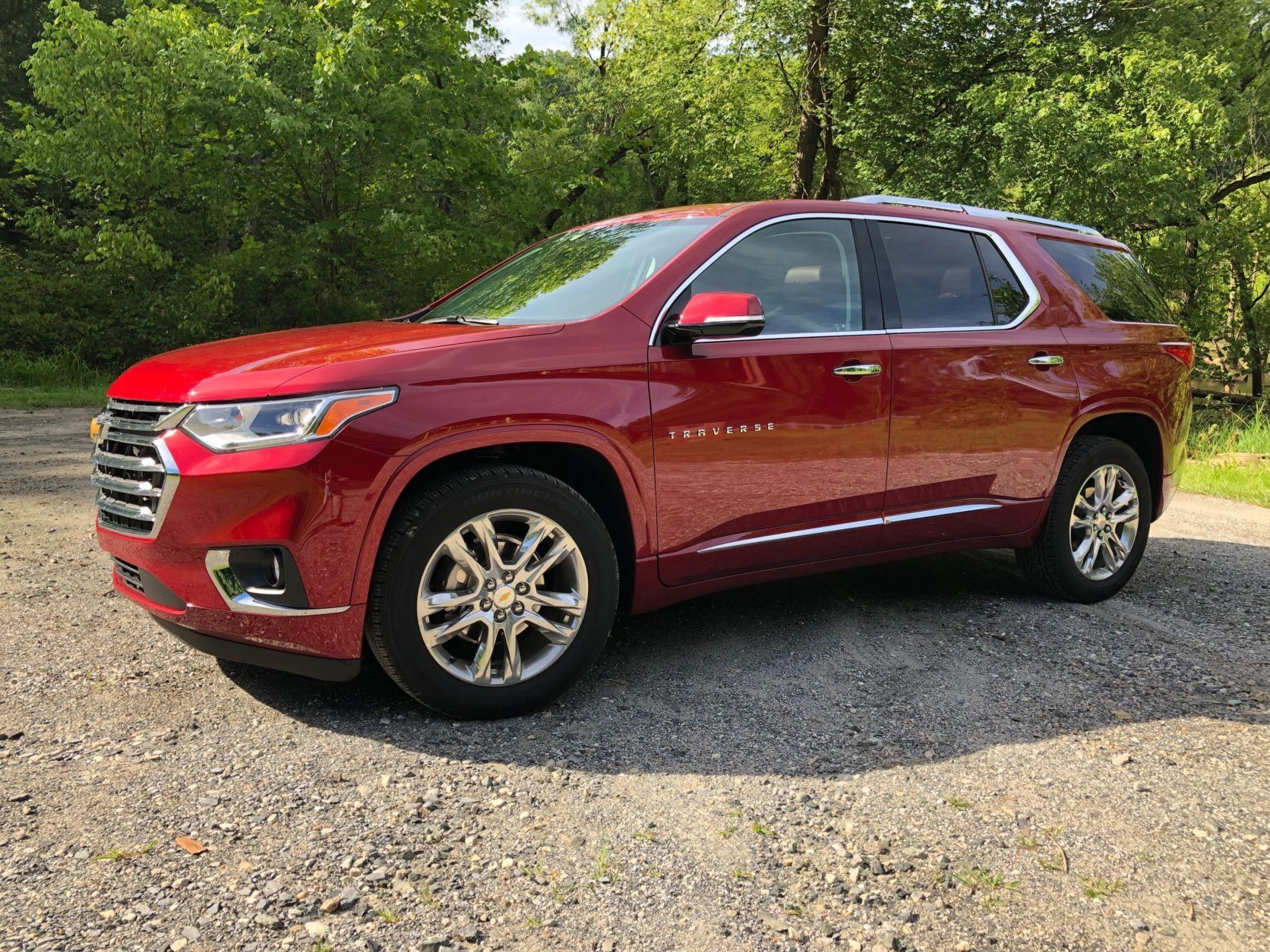 The second generation Traverse looks less like a typical family hauler that it is. The look is blocky and tough. The front-end styling is more SUV rugged than the previous model. Parked nose-to-nose the new Traverse doesn’t look as large as the old model but it’s actually a bit bigger. The space is now between the wheels and in the interior.

The High Country trim level has slightly different styling cues compared to other Traverse models. The lower body moldings are body color and not black like other trim levels. There’s more chrome trim on the body and the large stylish 20”wheels add some flash. 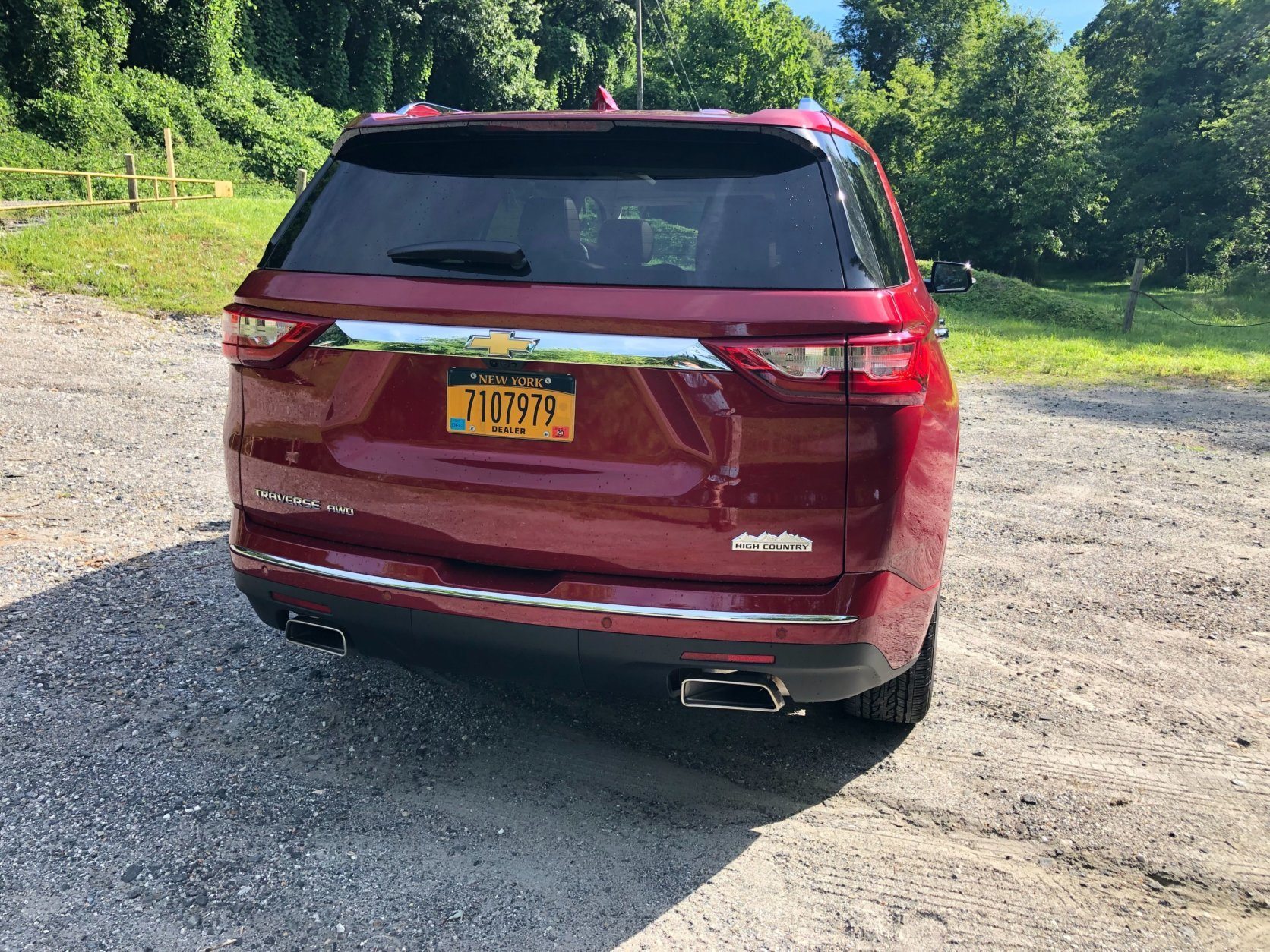 The other option on the Traverse is the color. On my test ride, Cajun Red paint cost $395 making it easy to spot in the parking lot. Choosing the High Country also scores you a large SkyScape power sunroof and a rear skylight that lets in a lot of light when you want. The gesture control power liftgate allows easy access with the movement of a foot. 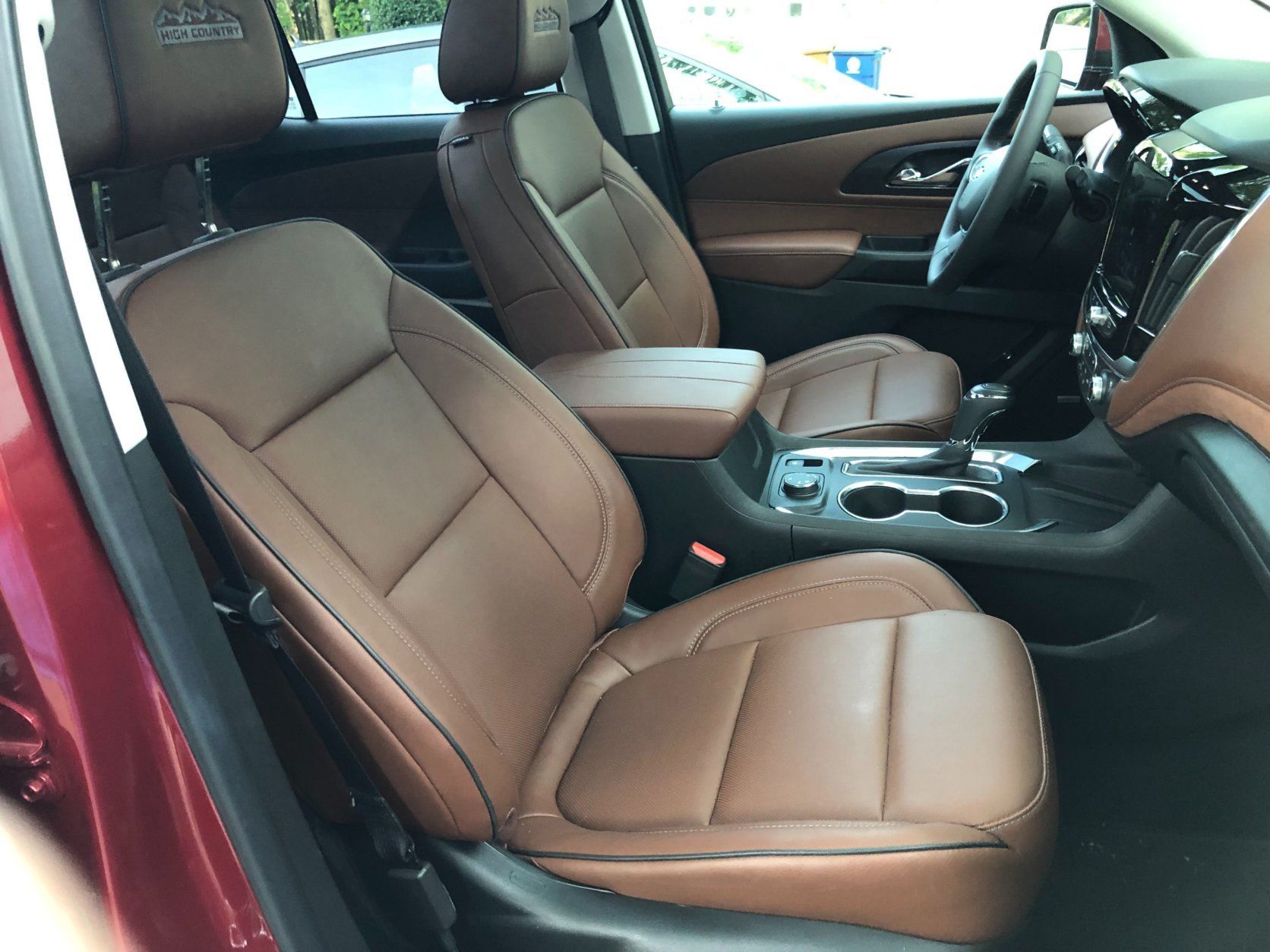 Behind the wheel the Traverse might take a few minutes to get used too, especially if you are coming from a small vehicle. If you haven’t driven a three-row crossover the length can be daunting, but you shouldn’t really worry as it drives smaller than it looks. 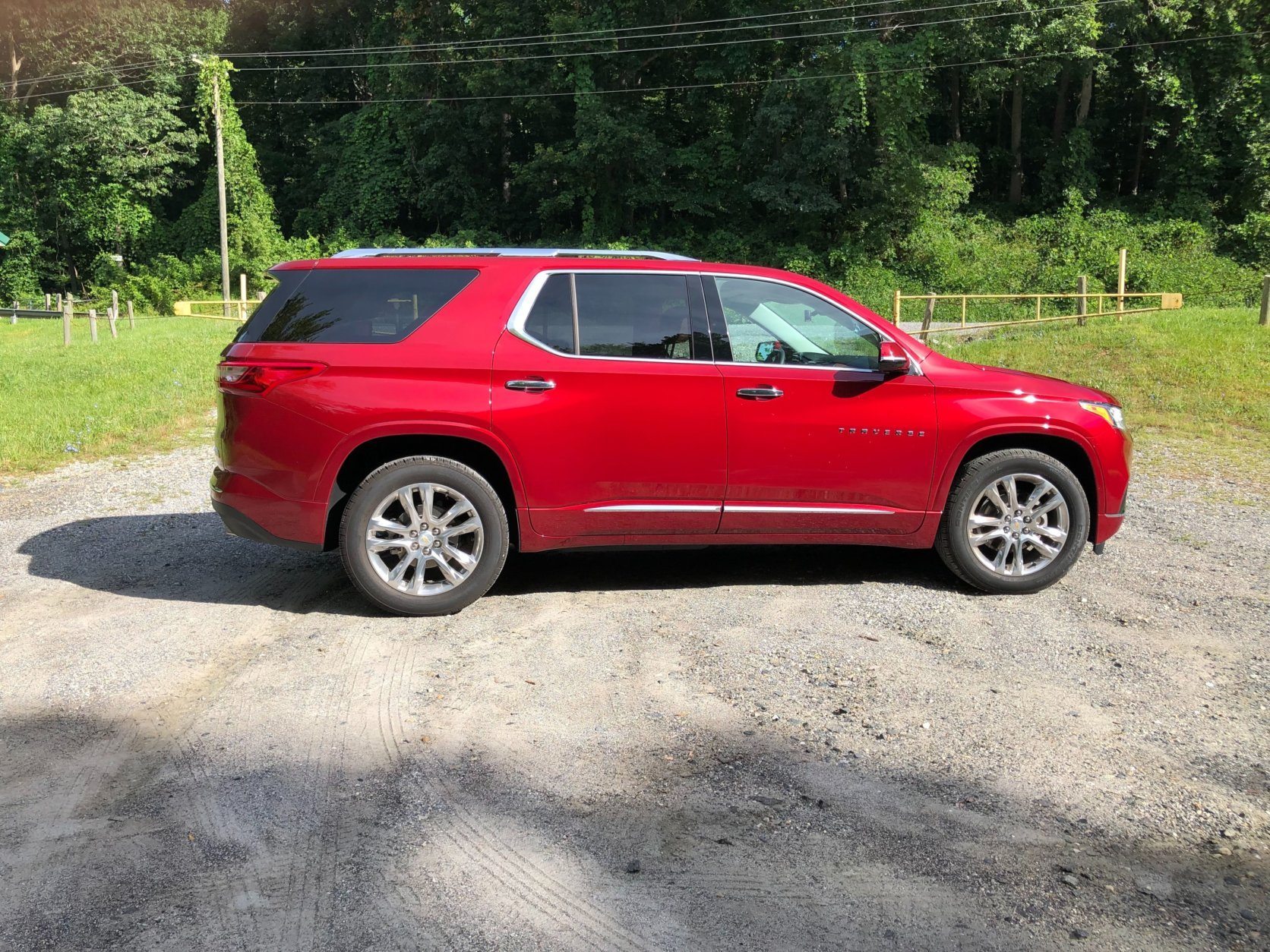 While not as car-like as some crossovers, the Traverse is more confidence-inspiring than before when it comes to the ride. It handles a bit better and takes all but the bigger bumps without drama. Taking corners, it has less body lean than a large SUV but don’t expect sporty handling.

While the old Traverse had full-time AWD the new Traverse can be switched between FWD and AWD with the turn of a knob. The V6 has plenty of power with 310hp. I had no problem keeping up with traffic. The nine-speed automatic was always trying to seek a higher gear even when I didn’t want it to, taking a bit of time to downshift when I needed to accelerate at times.

The upscale Chevrolet Traverse High Country is a welcome addition to the Chevy crossover lineup. Now you can have a more luxurious three-row crossover with even more space than some larger more costly SUVs.