After a year lost to the coronavirus, New York City's most well-known Fourth of July traditions are back.
Listen now to WTOP News WTOP.com | Alexa | Google Home | WTOP App | 103.5 FM

NEW YORK (AP) — After a year lost to the coronavirus, New York City’s most well-known Fourth of July traditions were back Sunday.

The traditional Macy’s Fourth of July fireworks show returned in full form with a display over the East River, as shells were shot from five barges in a televised, choreographed spectacle.

This year, crowds were welcome to gather.

The show was broadcast live on NBC as part of a two-hour special featuring artists including the Black Pumas, Coldplay, OneRepublic and Reba McEntire. The performers’ appearances were pre-recorded around the country in front of live audiences.

Last year, because of pandemic restrictions, there were a series of shorter fireworks shows in the days leading up to the holiday, with the locations kept secret in advance to keep people from congregating.

“It’s hugely significant because we’re all back together again. We were apart for so long,” said Mike Marrone, who took in the fireworks among a throng of onlookers along the Franklin D. Roosevelt parkway.

Other revelers expressed a mix of joy and apprehension, noting the coronavirus remains far from vanquished. Slightly more than half of the city’s population is fully vaccinated, according to the city health department, but many spectators were masked.

“This is a refreshing relief for me. It gives us a sense of being out and being free,” said Richard Armstrong, a retired police lieutenant who quarantined for months and, before Sunday, hadn’t photographed any fireworks in three years.

“I’m always glad to be above ground,” he quipped, “but as I look around, I can’t tell who is vaxxed and who isn’t.”

The annual spectacle of gluttony that is the Nathan’s Famous July Fourth hot dog eating contest also once again welcomed live audiences to watch the epic chowdown in Brooklyn. Joey “Jaws” Chestnut topped his own record by downing 76 franks and buns in 10 minutes in the men’s competition, while Michelle Lesco took the women’s title by eating 30 3/4 wieners and buns.

The event wasn’t quite the same as usual. Instead of being at Surf and Stillwell avenues, just off the Coney Island boardwalk, this year’s competition was held nearby in a minor league baseball stadium, Maimonides Park. Spectators were asked to register for free tickets in advance.

Last year, though, there were no spectators allowed as Chestnut ate a then-record 75 hot dogs and buns.

He said Sunday that hearing the fans again helped propel him to victory.

“They kept pushing me. They didn’t give up on me,” he said in an ESPN interview. “Even if I was uncomfortable, having everybody cheer me and push me, it made me feel good.”

Landmarks around the state, from the World Trade Center’s centerpiece tower and the Empire State Building to Niagara Falls, were lit in red, white and blue to mark Independence Day.

“If the last 16 months has reaffirmed anything, it’s how precious life is and how vital liberty is to our identity as New Yorkers and Americans,” Gov. Andrew Cuomo said in a statement.

Melanie Delcourt, meanwhile, celebrated her first Fourth of July since moving to the U.S. eight months ago from Paris.

“It’s just so beautiful,” she said of the gatherings. “We’ll remember this a long time.” 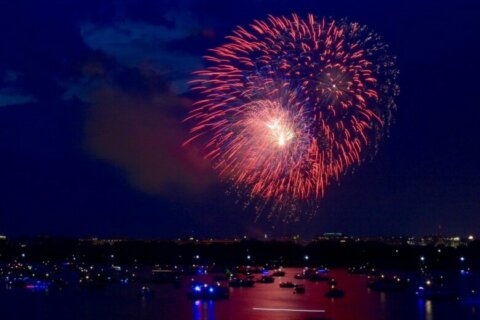