Is the new KFC Cheetos chicken sandwich any good? It depends

The KFC Cheetos Sandwich introduced Monday includes a fried chicken breast drizzled with neon orange sauce that a WTOP staffer described as looking radioactive, but it doesn’t pack that powerful of a punch.

“I wish there was heat, because there’s good crunch. I would like the hot sauce,” WTOP Traffic’s Jack Taylor said.

WTOP digital editor Teta Alim agreed: “If it was a hot Cheeto, maybe I would be more…”

Jumping in to agree, WTOP assistant editor Alicia Abelson added, “If they had crusted the chicken in hot Cheetos, that would have been (better),” while Taylor summed up with, “I would love that if that was crushed Cheetos for the breading of the chicken.” 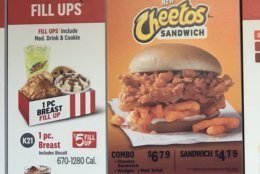 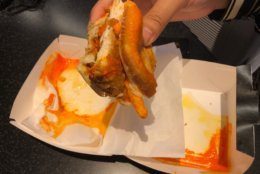 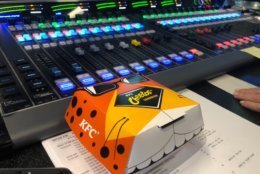 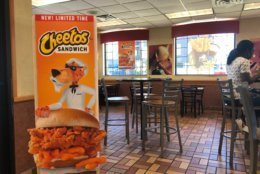 Feinstein said the sandwich is tangy, but not spicy and definitely crispy. “It’s very crunchy from both the chicken and the Cheetos, so you’ve got some good crunch. And, there’s nice mayo going on there.”

Feinstein thought the sandwich would be enhanced by pickle slices that would give the flavor a bit of a bite. Overall, she rates the sandwich a 4.5 out of 5, while co-anchor Mark Lewis was less enthused.

Asked what he thought might make the sandwich better, Lewis agreed with Feinstein: pickles.

The sandwich costs $4.79 and will be available for a limited time.