FILE - In this Sept. 14, 2016 file photo, Carla Hall, the Chew co-host and Top Chef alum, poses for a photo inside the North Star Cafe at the National Museum of African American History and Culture in Washington. The museum, opening later this month, will be an experience aimed at feeding the soul, literally. The Sweet Home Cafe is the museum's restaurant, with a menu featuring culturally authentic fare and modern-day-inspired foods. The restaurant is a journey through the agricultural south, Creole coast, northern states and the Southwest. (AP Photo/Susan Walsh, File)

She rose to popularity on "Top Chef" and "The Chew," but D.C.-based celebrity chef Carla Hall's latest project is deeply personal. In her new cookbook, she is sharing the history, stories and recipes of soul food.
Listen now to WTOP News WTOP.com | Alexa | Google Home | WTOP App | 103.5 FM

WASHINGTON — When Carla Hall walked across the Edmund Pettus Bridge in Selma, Alabama, she was overcome with emotion. Tears streamed down the celebrity chef’s face as she pictured others before her fighting for equal rights, only to be punished, or worse, killed.

The stop in Selma was one of many for Hall, who was on a research road trip of the south to collect ideas, stories and recipes for an upcoming cookbook — but it was the most influential.

“When I continued to walk to the other side of (the bridge), it was a feeling of, ‘Let me take this energy, like everyone else has taken this energy, and do something with it to honor my ancestors and to honor these people who are part of my community,’” Hall said.

“It became part of the impetus for this book.”

Hall’s third cookbook, “Carla Hall’s Soul Food: Everyday and Celebration,” which was released this fall, is a nod to the D.C.-based chef’s roots. Born and raised in Nashville, Tennessee, Hall said food was a big part of her life from the beginning — especially soul food.

In her book, she shares memories of snapping green beans and slicing into chess pie.

After studying business at Howard University, Hall started a lunch delivery service in the nation’s capital and eventually went to culinary school. Her techniques became refined, and for awhile, her recipes veered away from those on which she was raised. But Hall eventually found her way back to the cuisine of her childhood — all while landing roles on Bravo’s “Top Chef” and ABC’s “The Chew.”

Now, Hall is fully embracing and celebrating soul food with the recent release of her latest cookbook, and she wants others to do the same.

“I unapologetically love soul food, primarily because I spent so many years running away from it,” Hall said.

Soul food is commonly found in the South, but Hall said it’s not the same as Southern food. And the difference, she explained, is “black cooks.”

“It’s the food that’s born out of the African diaspora and slaves and the cuisine that we would cook. And it is the foundation of American food,” Hall said.

Another thing Hall wants to clear up? The common misconception that soul food is unhealthy. Yes, there are deep-fried dishes and cheese-covered casseroles that are favorites at parties and family get-togethers (these are highlighted in the celebration side of her cookbook), but Hall said a lot of soul cooking — the everyday — is vegetable based.

Beans and greens are common ingredients; so is seafood. And with recipes for black-eyed pea salad with hot sauce vinaigrette, succotash salad with corn and lima beans, and curried sweet potato salad, Hall is on a mission to reclaim soul food.

“And to hopefully inspire others to get back to their heritage if they’ve been running away from it,” she added.

Catch Carla Hall in an intimate discussion on soul food and her career in cooking at two D.C. events this weekend. On Friday, Nov. 30, Hall will be at Politics and Prose at Union Market, and on Saturday, Dec. 1, she is taking the stage at the 13th annual MetroCooking DC. 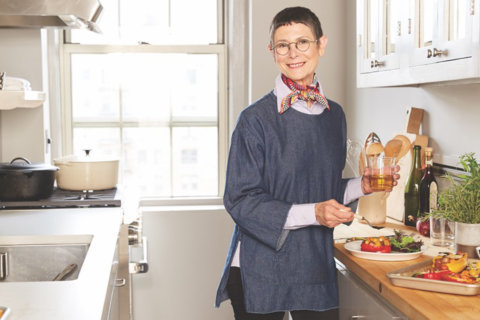 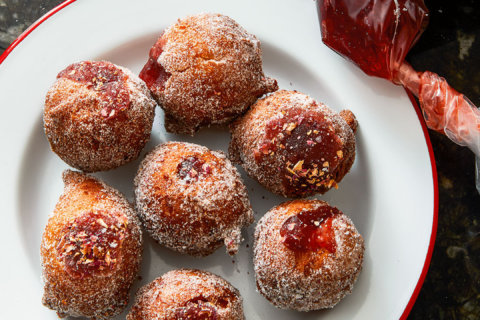