The neighborhood has changed around the Southwest waterfront's Fish Market. So has the parking situation. But the fundamentals of picking blue crabs remain the same. Here's a guide.
Listen now to WTOP News WTOP.com | Alexa | Google Home | WTOP App | 103.5 FM

WASHINGTON — Market prices for blue crabs can fluctuate with the calendar and as trucks bring them to the D.C. Fish Market in Southwest. But generally speaking, you’ll pay between $105 and $225 a bushel.

At Jessie Taylor’s Seafood mid-day on Friday, a bushel of mediums was going for $105, large males were priced at $175, and a bushel of extra-large crabs cost $225.

“Put [the different bushels] on a scale and they’re weighing out the same. It’s just less picking on the bigger crabs,” said Clarence Goodman of Jessie Taylor’s Seafood. About five dozen crabs are in a bushel of extra-large crabs. A bushel of large males, Goodman said, is about six or seven dozen. 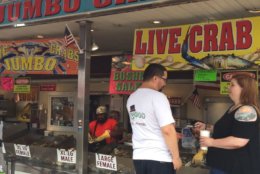 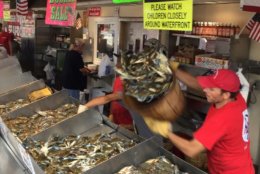 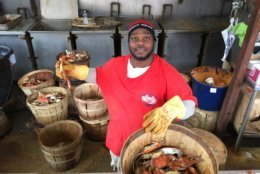 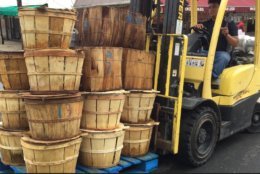 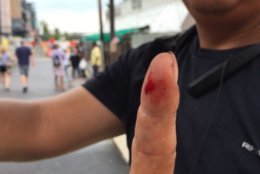 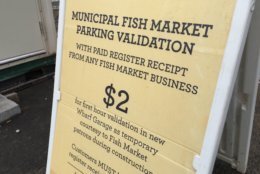 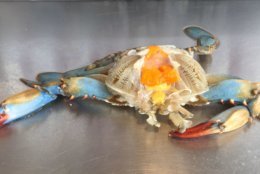 Why you want crabs with dark, dirty-looking bellies

“The darker the shell, the better — the more meat. They’ve been out there a long time,” Goodman advised.

Crabs that are very white on the bottom have molted recently, and the meat inside has yet to grow to begin to fill the shell. “It’s soft [-shell] crab season right now. They’re the ones that didn’t get caught in time,” Goodman said.

People familiar with the Southwest waterfront Fish Market wouldn’t recognize it from the vantage point of Maine Avenue. Construction — part of The Wharf development — blocks the view from the street, and there’s no more parking in the immediate vicinity of the floating barges that hold the various seafood vendors.

Parking now is available in The Wharf garages for $2 the first hour with a Fish Market receipt.

It takes 25 minutes to steam a bushel of crabs. A half-bushel takes 18 minutes.

But potential customers, Goodman said, shouldn’t be discouraged by long lines for the steamers.

“Because a lot of people that are in front of you are either getting snow crab or shrimp and that only takes five minutes,” Goodman said. “And they have 10 pots going at one time.”