WASHINGTON — A plate of green eggs and ham may have sufficed for a St. Patrick’s Day feast when you were a child, but as you’ve grown, so has your palate.

If you’re looking to celebrate March 17 with a more refined menu, Patrick O’Connell, chef and proprietor of The Inn at Little Washington, has some ideas — and none of them involve green food coloring.

His first tip: Take advantage of Mother Nature’s color palette. This time of year, early spring vegetables are more readily available, and they can add a pop of green to any ordinary dish.

At his two-Michelin star restaurant, O’Connell likes to make a puree of Italian flat-leaf parsley. He quickly blanches a big bunch in boiling water, then drops the leaves into ice water. After removing the stems, he puts the herbs into a blender, along with some stock. The end product is a bright green liquid puree. 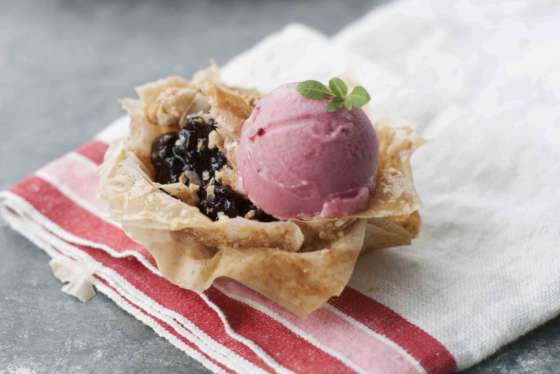 O’Connell incorporates the parsley puree into buttery whipped potatoes, which he serves alongside lamb.

“And it becomes this brilliant bright blob of green on the plate that really sets the dish off perfectly,” he said.

He also recommends using the puree in a risotto with morel mushrooms, or even over gnocchi.

Another favorite of O’Connell’s, which is easy for the home chef to master, is what he calls “a tangle tart of greens.” The recipe (see below) pairs perfectly with almost any meat, or can stand by itself as a winter salad.

O’Connell describes the dish as a mixture of sliced cabbage, cooked with a little onion and bacon, and then dressed with vinegar, a pinch of sugar and “lots and lots of mustard seed.”

“It’s a wonderfully versatile accompaniment — a pre-spring vegetable that’s wonderfully crunchy and beautifully green. And at the last minute, you whip into it some leaves of watercress.”

Cabbage is a staple at most St. Patrick’s Day celebrations, especially when served with corned beef. Unsurprisingly, O’Connell has a way to dress up the leafy green.

He cooks a little onion and bacon in a pan, and then adds thin slices of savoy cabbage, which the chef said is tender and cooks better than standard cabbage. He pours Champagne into the mixture and lets it cook down. Then, he adds cream.

“And it is a very luxurious, gorgeous accompaniment,” O’Connell said.

Of course, Irish cooking isn’t limited to corned beef and greens. O’Connell said another way to incorporate traditional Irish cuisine is with an afternoon tea, or even at the breakfast table with a bowl of oatmeal.

“And of course, the Irish love their oatmeal,” he said.

At The Inn at Little Washington, O’Connell serves a unique type of oatmeal — one “that people can’t live without.” He flavors Irish oats with a little vanilla and maple syrup, and creates a soufflé.

His advice? Place a dollop of the cooked oatmeal in the bottom of a buttered soufflé dish, and then whip egg whites and fold that into another spoonful of the oatmeal.

“You place that on top and you bake it for about 7 or 8 minutes until it’s puffed, and it’s a whole different world,” O’Connell said.

“Oatmeal has never tasted so elegant.”

O’Connell’s been thinking a lot about Irish cuisine lately — and not just because of St. Patrick’s Day. This April, the Virginia-based chef is traveling to Ireland to cook at the award-winning country house hotel, Ballyfin.

O’Connell’s six-course tasting menu will include dishes such as crispy napoleon of chilled Maine lobster with Royal Oscietra caviar, and truffle-stuffed breast of Kilkenny Farm Chicken on savoy cabbage, braised in Champagne. This event is just one of many planned for 40 years of celebrating the Inn at Little Washington, and tickets are still available.

“There are many ways to update and refine the classic flavors of Irish cuisine … and anyone who’s spent time in Ireland realizes what great products they’ve always had to work with,” O’Connell said.

“I think if people just think differently about the flavors of Ireland, as we’ve always had to do with the flavors of American cuisine, you just become a little creative in how you present them.”

This St. Patrick’s Day, test out O’Connell’s parsley puree in your “green eggs.” You may just stumble on a more authentic and delicious way to celebrate the holiday.

Recipe: A Tangle Tart of Greens

Additional recipes mentioned above can be found in O’Connell’s cookbooks, “Patrick O’Connell’s Refined American Cuisine” and “The Inn at Little Washington Cookbook.” 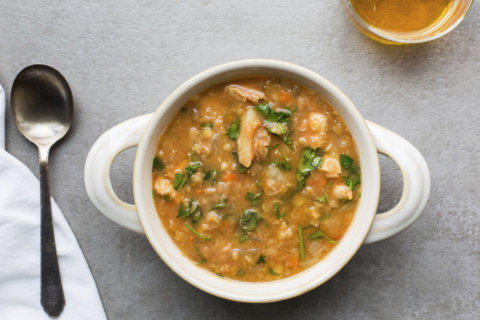