That smell was breakfast cooking at Miriam’s Kitchen, where Brown volunteered on Tuesdays as a dishwasher.

But in 2001, those smells stopped when Steven Badt stepped into the kitchen.

Badt, a chef who worked in restaurants in New York, Boston and D.C., didn’t see the need to treat the nonprofit’s food program any differently than a program in one of his restaurants.

So he replaced cans of mushy vegetables with fresh salads made from local greens, beans and nuts. Salty hot dogs were swapped for made-from-scratch waffles, omelets and home fries.

“Steve said, ‘I would never give anyone homeless something that I wouldn’t eat or you wouldn’t eat at home,’” Brown recalls.

The menu at Miriam’s Kitchen wasn’t the only thing that started to resemble a professional restaurant kitchen.

Badt set up prep shifts and trained volunteers to run the hot line. He also sought feedback from the 150 to 200 homeless guests who lined up every morning, rain or shine, for his meals.

Not everyone was accepting of the new order. Some didn’t see the need for such gourmet meals, especially since the end goal of Miriam’s Kitchen isn’t to dazzle guests with food — it’s to provide mental health, medical and legal services to the homeless, and to eventually place them in housing.

But Badt had a hunch that offering a good meal was a great place to start.

“Food is important,” he says. “It offers nutrition; it makes someone feel like they’re at home and it gives them a good start to their day or a good end to their day.”

The homeless started to come more routinely for the home-cooked meals; they began to feel more comfortable and established trusted relationships with the volunteers and the staff at Miriam’s Kitchen.

“As that trust built with case managers, it went from the great meal to toiletries and clothing [to seeing] a doctor. And then eventually, what we’re doing now, is we’re housing our guests in a permanent supportive housing program,” Badt says.

“The meal is something that becomes almost the first step.”

Badt’s day starts early. At 5 a.m., he is organizing 20 volunteers who show up to work the prep and hot lines, all to get ready for the 7 a.m. breakfast service.

The volunteer shift is challenging, but Badt says that’s intended. He wants the volunteers to feel challenged, energized and excited about the meals they prepare — it’s what keeps them coming back.

“I had 30 minutes to make 180 crepes, and it felt like working the line at a restaurant,” Emily Hagel says about her first day as a volunteer. Now, Hagel is the nonprofit’s director of kitchen operations, and will soon take over for Badt when he retires from his role this summer.

Longtime volunteer Brown also found inspiration in Badt’s kitchen. When she became more involved in the food preparation, Badt recognized her talent for baking and encouraged her to go to pastry school. Brown is now the organization’s volunteer pastry chef.

When guests arrive at the dining room, they are greeted with hot coffee, tea, cereal and oatmeal before going through the hot line, which is different every day. A recent breakfast menu boasted of blueberry ricotta crepes, eggs with greens and bacon, home fries, grits, fruit salad, green salad and toast.

The options are plenty, but Badt says it’s important to let the guests choose what they want to eat.

“It’s dignity; you’re not forcing food upon them, you’re giving them a choice,” he says.

And while the meals are gourmet, they do not break the bank. Badt says the average cost of a meal is 50 cents a plate, thanks to the nonprofit’s innovative gleaning program. Miriam’s Kitchen collects donated and unwanted goods from local farmers markets and retailers. Even the White House unloads a van packed with produce from its garden every month.

And that’s where the fun begins. Badt and Hagel sort through the donated produce, dairy and dry goods to develop their breakfast and dinner menus. Badt likens the process to a competition show on The Food Network.

Asparagus risotto might make the menu in the spring when the vegetable is in abundance at the farmers market. In the summer, buckets of blueberries are washed and cooked down for filling in crepes or blueberry cobbler.

“Why would an agency use canned goods, frozen goods, processed goods, when there’s so much product out there to play with?” Badt says.

“We’re able to really do what a restaurant does with specials. … Our goal within the kitchen team is to never accept the status quo and to turn out better and better quality food for less and less money.”

Brown says the improved quality of food has helped improve the health of guests, but it’s also helped to improve their spirits.

“The food has really brought [the homeless] in, and I think they have fun with it,” says Brown, who adds that regular guests even comment on their favorite — and not so favorite — dishes. “They’re trying new things and they know that their opinion is very important.

Since Badt started at Miriam’s Kitchen, he has set the precedent for food programs that serve the homeless. More organizations have started gleaning from farmers markets and retailers, and dignity and nutrition have been pushed to the forefront.

But this summer, Badt is ready to give someone else a chance at revolutionizing food’s role in social services. He’s hanging up his chef’s coat and handing the reigns over to Hagel.

“For 14 years, I’ve busted my butt to get [the kitchen] to a certain point, and now she and the crew are busting their butts to take it even further and in new directions,” he says.

Last July, Miriam’s Kitchen got even closer to its goal of ending chronic homelessness in D.C. when it began a contract to support 70 individuals in permanent supportive housing. And many will tell you: It all started with a meal.

“The impact of food is so incredible,” Badt says. 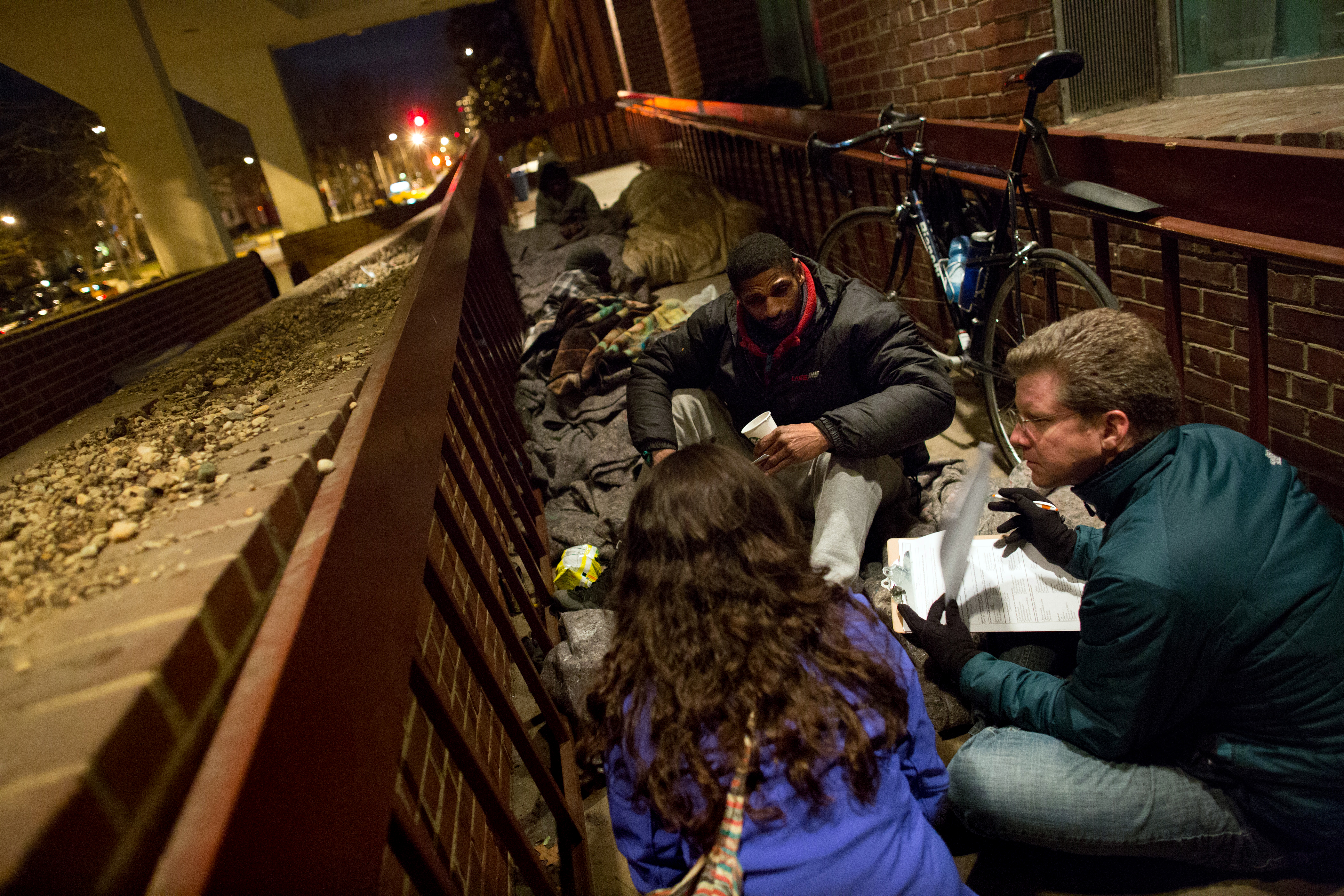