Her simple dress design became the symbol of the '70s, and now this legendary fashion designer is speaking out about her family and the first family.
Listen now to WTOP News WTOP.com | Alexa | Google Home | WTOP App | 103.5 FM
(1/5) 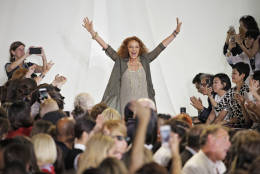 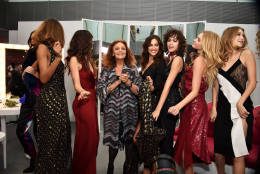 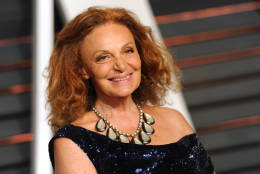 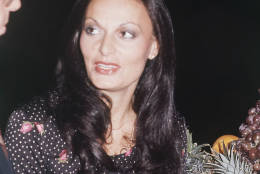 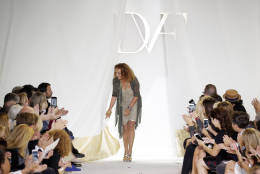 WASHINGTON — Twice a year, before the fall and spring collections make their debut on runways around the world, designer Diane von Furstenberg sends out a message to the fashion community.

“I always tell them: ‘Health is beauty. Please do not use anorexic girls.’ And, ‘Diversity,’” von Furstenberg explained during a live discussion with fashion critic Robin Givhan at The Washington Post on Dec. 15.

That plea is just one example of how the industry icon has helped shape and define fashion over the last 40 years.

Born in Belgium in 1946 to a Romanian father and a Greek mother who survived 13 months in Auschwitz, von Furstenberg said fashion was never a real goal for her.

“When I was growing up, I did not really know what I wanted to do, but I knew the kind of woman that I wanted to be. I wanted to be a woman who was independent, who could pay her own bills, who was not depending on her father or husband — that was the most important,” she said.

But while working as a photographer’s agent in Paris in the late ’60s, von Furstenberg discovered fashion, and fell for it — hard. She wanted to learn more than just the world of modeling and styling, so she traveled to Italy to study with a silk and jersey manufacturer. It was there that she made her first dress and learned the ins and outs of cut, color and fabric.

After her apprenticeship in Italy, von Furstenberg married her college sweetheart, Prince Egon von Furstenberg, a member of the German aristocratic family who was also a fashion designer. The two moved to New York and, right away, had two children. Von Furstenberg said it was becoming a mother that made her determined to have a successful career.

“I always wanted to have a man’s life in a woman’s body,” she said.

In 1972,  von Furstenberg showed her designs to Vogue’s then Editor-in-Chief Diana Vreeland, whose response to von Furstenberg’s T-shirt dress was, “This is genius.”

That was just the encouragement she needed to kickstart her career. By 1976, von Furstenberg was making 25,000 dresses a week.

She graced the cover of Newsweek, and her signature printed wrap dress became a symbol of the ’70s. Von Furstenberg said it was professional, yet freeing and rebellious. The $86 dress launched her into the spotlight.

“That dress is a bit of a mystery because it was a huge success and everybody had so many of them that it got saturated for a while,” von Furstenberg said.

But with a new decade came new change, and von Furstenberg was left uninspired in the ’80s. In fact, in her book published years prior to the 2016 presidential election, von Furstenberg said she decided to leave New York because “New York had become the city of Donald Trump.”

“What I meant was the mid-80s was ‘Dynasty,’ it was ‘Dallas,’ you know, big shoulder pads, big boofy hair … and so money seemed to be the big deal,” von Furstenberg said.

After splitting with her husband, she moved back to Paris and opened a small publishing house. The designer admits it was a tough time in her life, as she realized a lot of her identity was tied to her brand and her business, which she sold when she left New York. Her children were away at college, and she developed cancer in her tongue.

“I couldn’t express myself,” she said.

But a new door opened for von Furstenberg in the early ’90s —  the opportunity to re-launch her designs and her brand on QVC, a cable home-shopping channel. In two hours, the designer sold $1.2 million of her Silk Assets collection, and just like that, she was back in the game.

“After having felt like such a ‘has-been’ for a while, I was a pioneer again,” said von Furstenberg, who reintroduced the wrap dress to a new generation in 1999.

Now, von Furstenberg is one of the biggest, most well-respected names in the business. Everyone from Michelle Obama, to Kate Middleton, to Karlie Kloss has donned a von Furstenberg wrap dress. And the door is open for the designer to dress other notable figures.

When asked if she would dress America’s next first lady, von Furstenberg didn’t shy away.

“Any first lady should be respected like any first lady,” she said, adding that she, in turn, thinks the first ladies owe something to America’s fashion industry.

If they can wear American labels, they should, she said. “It makes sense.”

Despite recurring runway shows, skyrocketing sales and her influence on the industry, von Furstenberg said her best accomplishment is her family.

“All I can tell you is that the most successful thing I’ve ever done is my family. The thing I am proudest of is the quality of people and of human beings that my children and my grandchildren are,” she said, adding one piece of advice for the modern working woman. 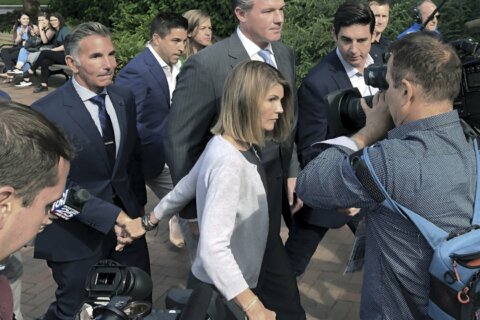