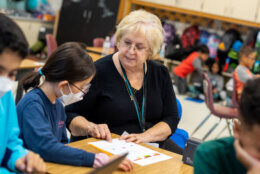 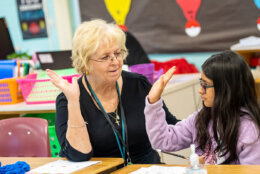 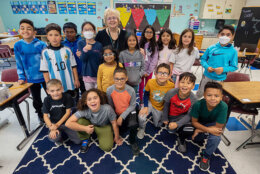 A fifth-grade student at Bull Run Elementary School in Centreville, Virginia, approached Bunni Cooper late last week to ask if the two could have lunch together.

The student inquired about the status of “Lunch Bunch,” a time for students at the Fairfax County school to eat and talk to Cooper, a longtime substitute teacher. Cooper said her lunch period for the day had already passed, but she told the girl that she’d make some time to chat a couple of days later.

It’s a request that Cooper, 76, has received many times recently, especially since she first started offering to have lunch with students last spring. Initially, Cooper said, it was students who “disliked me the most because I was a disciplinarian.” But then, a handful of kids started asking for lunch time with Cooper, who said that when she’s not in the classroom, she feels it’s her role to be there to listen to students.

Nine years after joining Fairfax County as a substitute teacher, Cooper is urging D.C.-area community members to consider how rewarding it can be. She is one of the county’s 3,500 active substitute teachers, from a pool that Bull Run Principal Jason Pensler said has shrunk since the pandemic.

Requests for substitute teachers have averaged between 1,500 and 1,600 per day, with requests higher on Friday, a school system spokeswoman said. A new initiative offers a $200 bonus to those who work 50 days as a substitute, with a maximum bonus of up to $900 offered to substitutes who work 150 days this school year.

The school system is also offering additional bonuses for substitutes who work on “high volume” days, when school leaders anticipate many teachers may be out.

“We’re in dire need of substitutes,” Cooper said. “You don’t have to know everything. You do need to love children, and you need to have an ounce of patience.”

Cooper worked at the World Bank for 23 years before retiring in 1999. She then worked as a trainer for a large medical group in Northern Virginia, before deciding to move on in 2013.

Cooper, known to students as Ms. Bunni, said she has always loved kids, but never had children of her own. So, she went through orientation and training to become a substitute teacher.

By 2015, Cooper had worked at Bull Run more than any other Fairfax County school, and she was asked to be available almost exclusively for Bull Run classes. No subject is off limits, so Cooper’s daily tasks vary. Some days it’s phonics and spelling with kindergarten and first graders, and others it’s science or language arts.

In between classes, some students will approach Cooper, who has been referred to as their school grandma. When they ask to give her a hug, she never says no. Students also keep her up to date on the latest trends — Cooper has been taught how to dab and do some dances, which always gives students a good laugh.

Sometimes, she’ll sing songs with students, who also enjoy challenging her in the education game Kahoot!

“I try to make learning fun,” Cooper said. ” … I try to do it with as much love that I can give them, but at the same time, let them know I’m not their friend in school, I’m their teacher. And I’m here to encourage them, to develop a relationship with them, to have fun with them.”

Cooper, who almost always substitutes five days a week, said she often hears from former students, who text her to check in. Pensler, the principal, said she’s in “high demand.”

“Bunni is one of many subs who, they belong here,” Pensler said. ” … The kids adore her. When they see that she’s subbing in their room for that day, there’s a sense of care and a sense of joy.”

Cooper spent the early days of the pandemic emailing colleagues, to make sure everyone was OK. She eventually served as a virtual substitute, but on the first day when kids were allowed back in school buildings, Cooper said she cried next to another teacher.

“I’ve never been a mother, but it was like having your kids ripped away from you,” Cooper said.

It’s that feeling she hopes makes others consider working in schools in some capacity.

“I tell anyone who’s interested in subbing, getting in the classroom’s giving back to the community,” Pensler said. “We see you, we welcome you, you belong here.”