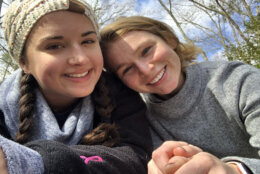 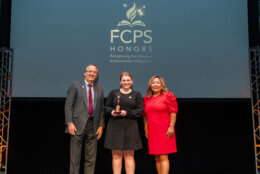 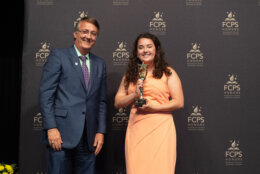 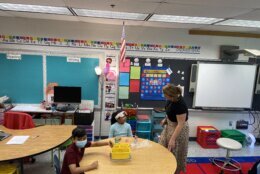 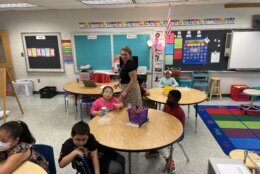 Amelia Carr first learned about Shelby Press while working at Top Golf the summer before starting college at the University of Mary Washington in Virginia.

A co-worker who went to high school with Press suggested the two become friends. Carr and Press grew up a few miles from each other and went to rival Fairfax County high schools, and they crossed paths several times. Both were active in student government and played field hockey but hadn’t spoken much.

But on the first Monday class of their freshman year — History 131, which met at 9 a.m. — the two spoke, took a picture together and sent it to their mutual friend. That exchange in class spearheaded a yearslong friendship for the aspiring teachers, who were recognized as Outstanding Elementary New Teachers at Fairfax County, Virginia’s annual award ceremony a year apart.

Press, who teaches second grade at Riverside Elementary, received the award this year. Carr, a kindergarten teacher at Bucknell Elementary, was recognized last year. The award is given each year to an instructor in their first three years of teaching.

“We have similar classroom management,” Carr said. “We run a tight ship, as you have to in lower elementary school, but we’re both very fun and play-based with our instruction. We want our kids to first have fun, and that’ll support their learning.”

The friendship evolved after Carr and Press noticed that they were in similar classes, so they began studying together. Carr sat with Press’s family while Press played field hockey, and brought a cutout of Press’s head to a handful of games during their senior year.

The pair eagerly started graduate school together, unsure where they’d end up. Press, for one, knew she wanted to teach after assisting during day care as a child. During a school break, Carr said, they brainstormed what counties they wanted to work in, using a spreadsheet to account for all of the possibilities. They both were interested in staying in Virginia, and in the winter of their year of graduate school, they attended a Fairfax County job fair.

Both were early hires at Title One schools, and were offered a job about a month before the pandemic started. They began their teaching careers working with students virtually from their parents’ homes, saving money and ensuring they were safe as the coronavirus spread.

“Patience, flexibility and just perseverance,” Press said of her takeaways from virtual learning. “When a day is tough, you just have to be OK with a tough day and move on. Not every day will be like that — there will be amazing days, and there will be hard days, but that’s OK.”

Carr and Press moved into an apartment together, sharing a bond for cooking, going on walks and watching “New Girl.” And when each was honored for their work in their classrooms, the other wasn’t surprised.

Carr found creative ways to keep students engaged while schools were closed, mailing them letters and creating a YouTube channel where she would sing and dance. She was surprised when she was recognized at her school and then won the regional award. With Press and other friends in the crowd at the Jiffy Lube Live ceremony, Carr was honored to be nominated but didn’t think she’d win at the county level. When she was announced as the winner, she cried, and then sent a message to students and parents.

“The county made me feel so special,” Carr said. “I was so proud of everyone, and I just felt very honored.”

Carr similarly attended the recent ceremony and wasn’t surprised when Press was announced as this year’s award winner. She’s such a positive person, Carr said, that she wrote Press a poem titled “Sunshine Shelby.” Her students are often on the receiving end, Carr said.

“I was really surprised, because I had spoken to the other women in my category,” Press said. “They were amazing teachers who had incredible experiences as well their first three years.”

As they prepare for their second full in-person school year, Press and Carr appreciate each other’s friendship.

“Having a teacher best friend’s really important, and having someone, because teaching is a pretty consuming job, mentally (and) physically,” Carr said.