The National Weather Service said that an EF-0 tornado touched down Thursday in Centreville for about one minute. It was the second one in Fairfax County that day.
Listen now to WTOP News WTOP.com | Alexa | Google Home | WTOP App | 103.5 FM

The National Weather Service said that an EF-0 tornado touched down Thursday in Centreville for about one minute. It had an estimated speed of 85 mph. An EF-0 is the lowest of six tiers on the Enhanced Fujita Scale, which measures tornadic intensity.

An additional EF0 tornado was confirmed in Centreville from Thursday March 31st. pic.twitter.com/vWUrooZqF7

The tornado, which was on the ground for well under a minute, toppled, snapped and uprooted some 15 pine trees at the end of Batavia Drive behind Cub Run Elementary School. No damage to nearby residences or other structures were observed during the NWS survey.

After the tornado touched down, it moved from west to east toward the cul-de-sac. Seven trees on the south side were not damaged, while most of the remainder were either uprooted, snapped at the base or snapped 10 to 15 feet in the air.

“One of the tree tops was turned in mid-air and landed opposite to its expected orientation had this been straight-line winds, indicative of a very brief tornado touchdown,” the National Weather Service said.

It traveled for about 240 feet before lifting off as it moved east of the cul-de-sac.

After the Centreville tornado struck, another EF-0 tornado touched down in the Tysons Corner area. That tornado caused damage to two gas stations on Chain Bridge Road. 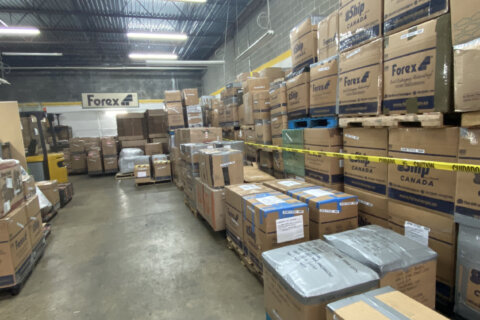