Possible tornado touches down in Tysons

After severe storms rolled through the D.C. area Thursday night, the National Weather Service on Friday morning will assess whether a tornado touched down in the Tysons area.
Listen now to WTOP News WTOP.com | Alexa | Google Home | WTOP App | 103.5 FM
(1/4) 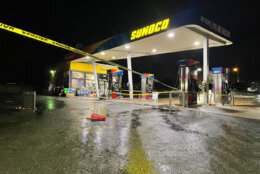 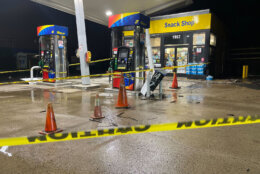 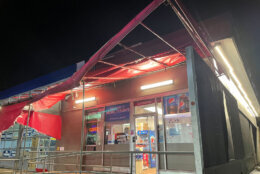 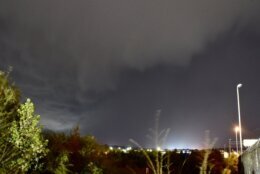 After severe storms rolled through the D.C. area Thursday night, the National Weather Service on Friday morning will assess whether a tornado touched down in the Tysons area of Fairfax County, Virginia.

Two gas stations on Chain Bridge Road in the Tysons Corner area had damages from what could be at least one possible tornado that touched down in Fairfax County, Virginia.

“We did see rotation on the radar with that storm,” he said.

LaSorsa said the National Weather Service received several damage reports around 8:40 p.m. and and it matched up with what the weather service saw on radar.

“It was about 8:41 (p.m.) where we saw the damage to the roof of the gas station near Chain Bridge Road road in Tysons Corner. And then, there was also a report of a ceiling panel that became dislodged off the Tysons Corner Metro onto the rail there,” LaSorsa said.

Typically, the National Weather Service sends its investigators to survey the areas where tornadoes were suspected to have struck.

Storm Team4 Chief Meteorologist Doug Kammerer said he believes it was a tornado.

“I do think this was a tornado … a small tornado,” said Kammerer, who called home while on the air upon realizing that his home was in the path of the severe weather. “Fortunately, they went down to the basement, and they were OK.”

Metrorail had trains running on one track Thursday night between the McLean and Tysons Corner stations due to a track obstruction. Sherri Ly, a Metro spokeswoman, said a ceiling tile blew off onto the track. Normal service resumed just before midnight.

In Montgomery County, a tree fell along Sheridan and Hancock avenues in Takoma Park, the National Weather Service reported.

Damage reports also came in about downed power lines and trees down in multiple Maryland counties, as well as the possibility of damage on the athletic fields at Hammond High School in Howard County.

The threat of severe weather ended before midnight, but left some lingering showers as a powerful cold front crossed the area.

Friday will start out pretty gray, with increasing sunshine during the day. It will be breezy and cooler, with highs near 60.

Saturday will be mostly sunny with seasonable highs in the mid- to upper 50s. However, there will be a few light sprinkles Saturday night into early Sunday due to a low-pressure center marching toward the Mid-Atlantic.

There will be some break for sunshine Sunday with highs in the upper 50s, but it will be cloudy.

High pressure will bring drier air and sunshine back to the area Monday, with pleasant highs in the 60s.