In November, Mount Eagle Elementary Principal Jean Consolla couldn’t stop thinking about a teacher at the Fairfax County, Virginia, school who was about to have a baby.

Because Virginia’s largest school system is short on substitute teachers, Consolla anticipated not having a long-term substitute. Some teachers have been out sick, making it increasingly difficult to find coverage. Occasionally, Consolla has to fill in.

As she considered ways to cover the impending vacancy, Consolla also thought her son would make a great substitute. A junior at the University of Louisville majoring in sports administration, Julian Lawson Consolla was due home for Thanksgiving for 10 days.

If she could convince him to start the application process, she thought, he’d be able to fill in by the time his winter break began.

During a phone call, Julian expressed interest, and after completing the necessary steps was cleared to begin working. Now, the school system is urging other college students to consider becoming substitute teachers to make extra money and fill the void.

“I was looking for employment over this winter break, because I knew I was going to go back (home) for a couple of weeks,” Julian said. “This proposal came up that staff was needed at Mount Eagle Elementary, and that this is a good opportunity for me to have a job that pays well, is a good experience and something that’s within my family.”

While he isn’t planning to become a teacher, Julian previously had teaching experience. During summer 2020, he was an online teacher for third through fifth graders, and last winter break, he tutored a kindergartner, helping with an online class.

But his in-person experiences proved to be different, having to teach a curriculum for the first time. Starting Dec. 10, he worked with third and sixth graders over six days of substitute teaching.

Beyond working with them, he enjoyed overhearing students brag that he was their substitute.

“I have to be very clear with my instructions, how to set expectations, because for sixth grade, when I was leading, they kind of knew a level of respect that was needed,” Julian said. “Third grade, you kind of need to establish the respect and how things are going to (run), how you’re going to approach things.”

Finding substitutes has been challenging, Jean said, and the school’s substitute teacher pool is smaller than it has been in the past. Working in schools during collegiate breaks is attractive, she said, because it doesn’t require evening work and offers decent pay.

Applying to become a substitute, Jean said, is a great activity for students home from school, because testing, fingerprinting and paperwork processing can take a week or two.

In an emailed statement, a school system spokeswoman said during non-pandemic years, the county’s substitute teacher fill rate was about 80%. During the pandemic, that figure has hovered in the 70% range, but in the middle of the most recent coronavirus surge, its fill rate is 55-60%.

“It’s been a real struggle,” Jean said of the shortage. “It’s been a stressor. It’s just been hard. We’ve just had to scramble. It’s one of those things that impacts everybody.”

When Julian’s spring semester ends, he said he’s planning to resume working in classrooms, after last week’s snowstorm cut his first stint short. Now that he’s back in Kentucky, students are already asking if he’s planning to return to the classroom.

“Julian finishes at the end of May, he can get off the plane and the next day, he can be in a position where he’s making over $100 a day,” Jean said. “He can still go out with friends, he’s got money in the bank and it’s ready to go. That was the push I had [to] get this taken care of over Thanksgiving while you’re home. Because then when you come back in December, you just pick it up and go to school that day.”

To help increase its substitute teacher pool, the school system is hosting a substitute interview day Jan. 18 from 9 a.m. to 11 a.m. More information is available online. 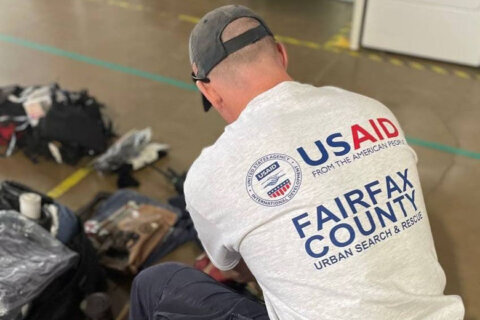