Va. State Trooper hospitalized after cruiser overturns in I-95 chase

A Virginia State Police trooper was taken to the hospital Thursday after his vehicle overturned during a chase on Interstate 95 during the busy evening rush hour.
Listen now to WTOP News WTOP.com | Alexa | Google Home | WTOP App | 103.5 FM
(1/3) 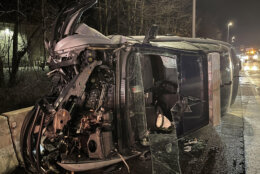 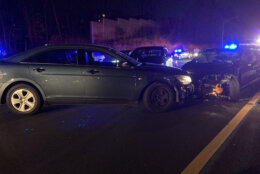 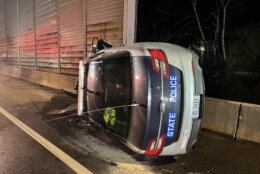 A Virginia State Police trooper was taken to the hospital Thursday after his vehicle overturned during a chase on Interstate 95 during the busy evening rush hour.

According to Virginia State Police spokesperson Corinne Geller, the incident occurred just before 5 p.m. as the trooper was stopped on the northbound shoulder of I-95 at the 155 mile marker in Prince William County assisting a traffic stop.

A Chevrolet Malibu traveling north on I-95 struck the trooper’s patrol car, and then fled the scene. The officer attempted to catch up and pull over the vehicle, starting the chase.

When the trooper caught up to the Malibu, its driver rammed the patrol car and forced it off the road. The police vehicle was then pinned up against the Jersey wall and flipped onto its side. The hit-and-run Malibu quickly left the scene and drove north on I-95.

Police say the trooper was hospitalized at Fairfax Inova Hospital as a precautionary measure with minor injuries.

Meanwhile, the Malibu was still being chased down by Virginia State Police. As the suspect got to the area of I-395 and Duke Street in Alexandria, Fairfax County Police used a “Precision Immobilization Technique” to spin his car out to a halt.

Police identified the suspect as Douglas Johnson Jr., 31, of Maryland. He was arrested and charged with felony speed to elude.

The chase resulted in long backups on the highway on a busy travel day for the nation’s most heavily traveled north-south highway.