A virtual reality exhibit in McLean, Virginia, wants to let audiences feel some of the discomfort of racism in America in a new way.
Listen now to WTOP News WTOP.com | Alexa | Google Home | WTOP App | 103.5 FM
(1/4) 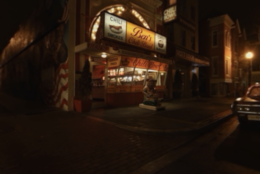 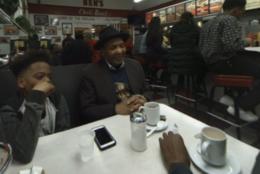 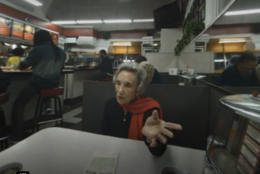 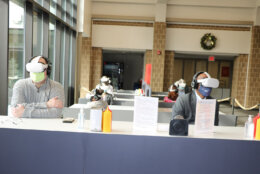 A virtual reality exhibit in McLean, Virginia, wants to let audiences feel some of the discomfort of racism in America in a new way.

“Traveling While Black,” a virtual reality movie, is set in D.C. at Ben’s Chili Bowl, “a safe place for the Black community to stop and eat when they couldn’t before stop in other major restaurants and venues,” said Daniel Singh, the executive director of the McLean Community Center, where the show is opening on Wednesday.

As you watch the movie while wearing a virtual reality headset, it feels like you are at a table in the restaurant, with a 360-degree view. ”So you can look at the floor,” Singh said. “You can look at the ceiling and watch the fans swirling around.”

And you can take part in conversations with people about their experiences with racism while traveling.

But that was just the beginning of her story. “We couldn’t relieve ourselves on the train. You either had to hold it or relieve yourself sitting there and then you’re wet when the train stopped,” she recounted in the movie.

When you got off the train, the restrooms were often white-only.

“You would get off the train and then you would relieve yourself outside, almost like you would if you were a dog,” she recalled.

The movie extends the experience to the present time in an interview with Samaria Rice, the mother of Tamir Rice, a 12-year-old African-American boy killed by police in Cleveland, Ohio, when reported he had a gun, which turned out to be a toy, at a recreation area.

She recounted the image that replays in her mind of her son after he was shot: “Him laying on a gurney and they would not allow me to touch him because they said he was evidence,” she said through tears. “I never even got a chance to get close to my son, to hold his hand, to kiss him and let him know it was all right.”

With the virtual reality headset on, you can’t separate from the movie in the way could with a normal movie. If you get uncomfortable, you can’t look away.

“When Tamir Rice’s mother is talking, if you turn away from watching her because it’s too emotional, you see the owner of Ben’s Chili Bowl and other patrons crying as they hear her interview,” Singh said, “It’s all around you. In a way it kind of helps you maybe experience what Black life is in America.”

His hope is presentations like this will change the conversation about racism from one of statistics and news reports to something more human.

“You’re talking to a person and it brings us back to connecting to that level, building bridges, and hopefully working toward a solution,” said Singh. “So you don’t just walk away after a news bit, but you walk away with a way maybe you’ll think about how you’ll make things better for the community going forward.”

“Traveling While Black” is open at The McLean Community Center and will run through Feb. 12. It’s free, but you need to make an appointment to try it. You can sign up on their website.