A man is dead after a vehicle struck and killed him on the eastbound lanes of Va. Route 7/Leesburg Pike in Herndon, Virginia, early Sunday morning.

Fairfax County police responded to the intersection of Leesburg Pike and Redberry Court around 5:30 a.m. Sunday for a hit-and-run crash involving a pedestrian.

Police identified as Allen Romero, 43, of McLean, as the victim.

According to police, Romero was crossing the eastbound lanes of Leesburg Pike when he was hit by a black Ford Fusion made between the years of 2011-15.

After Romero was hit by the first car, he landed in the eastbound lanes and was subsequently hit by other cars as well, with one of them stopping, per police.

Detectives are seeking the Ford Fusion, likely with a damaged driver’s side mirror, involved in the crash. Anyone with information is asked to contact county law enforcement at 703-280-0543.

The WTOP Traffic Center reported traffic was moving again in the eastbound lanes of Leesburg Pike at 1:47 p.m. after they were closed between the Fairfax County Parkway and Sugarland Road for crash response and investigation. Westbound travel was not impacted.

For the latest road and traffic conditions, see WTOP’s traffic page or listen to updates every 10 minutes online or on the air at 103.5 FM. 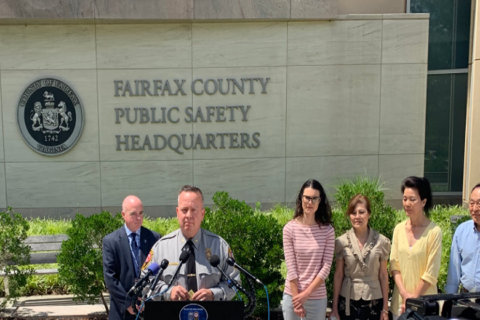