The Fairfax County School Board voted Thursday night to establish a “holistic review” of the admissions process at Thomas Jefferson High School for Science and Technology, creating a substitute to its long-standing admissions test and the opportunity to increase diversity among the student body of the prestigious Virginia school.
Listen now to WTOP News WTOP.com | Alexa | Google Home | WTOP App | 103.5 FM

The Fairfax County School Board voted Thursday night to establish a “holistic review” of the admissions process at Thomas Jefferson High School for Science and Technology, creating a substitute to its long-standing admissions test and the opportunity to increase diversity among the student body of the prestigious Virginia school.

Now, the school will use a review process that calls for the top 1.5% of the eighth grade class at each of the county’s public middle schools, who meet the minimum GPA, student portrait sheet, problem-solving essay and experience factor standards, to be eligible for admission.

Prospective students must have an unweighted 3.5 GPA and an algebra background.

After the 10-1 vote in favor of the new procedure, the admission process is required to use only race-neutral methods “that do not seek to achieve any specific racial or ethnic mix, balance or targets,” the motion said.

The changes will be effective for students entering the school in Fall 2021, who are currently in eighth grade.

The board’s decision comes after Fairfax County Public Schools Superintendent Scott Brabrand introduced a proposal in September that aimed to eliminate the high-stakes admissions test used to judge applicants as well as the $100 application fee.

In October, the board that represents Virginia’s largest school system voted to stop using both.

The school board has spent months considering how to amend its admissions process, with graduates of the elite magnet school speaking out against removing the test requirement, suggesting it may decrease diversity.

Still, the county has expressed its desire to create a more diverse student population. The school is routinely ranked among the top high school’s in the nation, and many families plan their children’s educational careers around gaining acceptance to Thomas Jefferson.

But Black and Hispanic students have been underrepresented in the school’s student body.

“We have been working to understand why the talent at [Thomas Jefferson High School for Science and Technology] does not reflect the talent in [Fairfax County Public Schools],” Brabrand said in a news release in the fall.

“We believe there has been over-reliance upon the current admissions test, which tends to reflect upon the socioeconomic background of test takers or the ability for students to obtain private test preparation instead of students’ true academic potential.”

Opponents of the county’s decision said to change the process was anti-Asian, because Asian American students now represent about 70% of the Thomas Jefferson High School student body and would likely see diminished representation under the new plan.

Those against changing the process created the Coalition for TJ, a group that said eliminating the test would decrease diversity.

About 100 people rallied outside the school in October to suggest that eliminating the race-blind test would result in the school’s population becoming almost exclusively white.

To ensure the school board is monitoring whether its new admissions process is effective, it passed a motion Thursday to annually present a report that will include diversity of the admitted class, attrition rates and reason for students not attending or leaving the school, remediation efforts, STEM class offerings and participation in enrichment clubs. 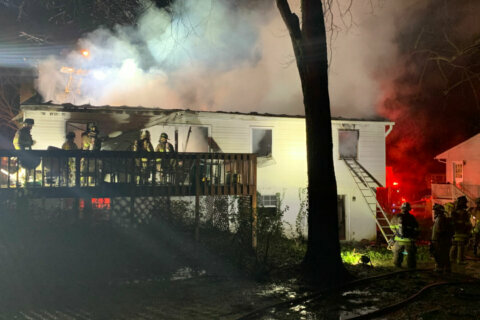