Home » Fairfax County, VA News » 'It was so devastating':…

‘It was so devastating’: Fairfax Co. fire destroys construction site, residents locked out of homes

Some still can't get into their homes near a massive fire that destroyed a construction site in Fairfax County, Virginia.
(1/6) 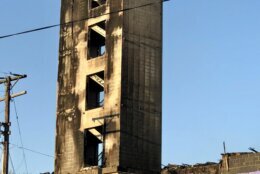 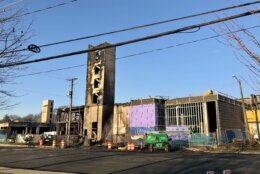 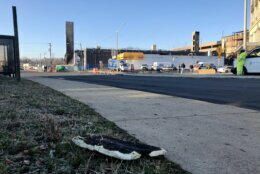 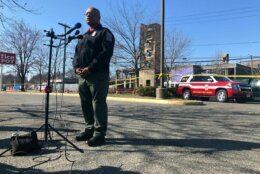 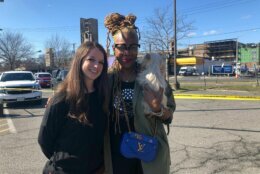 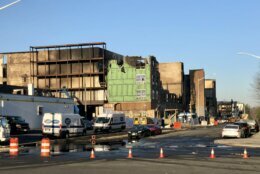 Many residents still can’t get into their homes after a massive fire destroyed a construction site in Fairfax County, Virginia on Saturday morning.

Augustine Nsiah lives in the Kings Gardens Apartment building in Fairfax County directly next to a construction site on Poag Street that burned to the ground Saturday. He grabbed his 1-year-old son and his wife and ran out of the apartment, leaving everything behind.

“It was so devastating. We saw a fire right next to the place where I live, so I had to pull my family out,” Nsiah said.

They are now staying at a friend’s house, but he returned Sunday intending to pick up clothes and other things he left behind — only to find he had been locked out of his apartment.

“We had water damage in my apartment so we could not get in,” Nsiah said. “I was lucky that I got my car out. A lot of people weren’t so lucky.”

A single staircase going nowhere is all that remains of one of the buildings, at what just over a day ago was a bustling construction site on Poag Street.

The 4-alarm fire broke out around 9:40 a.m. on Saturday, and tore through the construction site. The fire burned so ferociously, it took firefighters much of the afternoon and evening to extinguish remaining hot spots. Towering smoke billowed across the Potomac River to neighboring Maryland.

According to a press release from Fairfax County Fire and Rescue, a construction worker at the site noticed a fire in one of the trash chutes. He called 911 and attempted to extinguish the fire himself but was unsuccessful.

Fairfax County fire officials said a combination of wind patterns and the lack of a sprinkler system at the partially-completed building caused the fire to grow into one of the most devastating blazes in recent years for the area.

Flames spread to five buildings and 14 townhouses that were all under construction. Fire officials call these properties a total loss. The fire damaged an additional 14 townhouses, four single-family homes, five apartment buildings, a commercial building, and 28 vehicles.

Two fire fighters suffered injuries and were treated at a local hospital. Another civilian was taken to the hospital with minor injuries.

Mayasa Telfair, who lives in the Shelby apartment building next to the construction site, had to not only leave her belongings behind, but her small Yorkie as well.

She returned on Sunday hopeful and started smiling the minute the property manager of the apartment building came walking up with a shaking small dog.

Tellfair and others who live in the buildings directly surrounding the construction are being helped by the Red Cross and are unsure as to when they will be allowed to get their belongings from their homes.

It took about 150 firefighters more than eight hours to get it under control. Some crews were still on scene assessing the damage and checking for any remaining hot spots on Sunday morning.

Debris littered the lawns of area businesses. Police were on the scene Saturday at several intersections instructing walkers on where to safely navigate.

The fire that could be seen for miles destroyed the South Alex condominium building where units were being sold for around $700,000.

The CEO of Combined Properties that owns the complex said they are distraught but are committed to rebuilding.

“We are devastated by the massive fire that has destroyed our South Alex property and threatened nearby homes and buildings,” the statement said. “We have long been a part of this community and are deeply committed to rebuilding and fulfilling our commitment to this neighborhood.”

The origin and cause of the fire remains under investigation.