Virginia firefighters are battling a sprawling 5-alarm fire that started from a multi-story construction site just south of the City of Alexandria in Fairfax County, with a large plume of smoke visible for miles.
Listen now to WTOP News WTOP.com | Alexa | Google Home | WTOP App | 103.5 FM
(1/11) 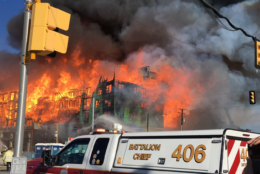 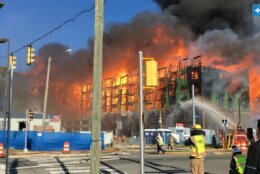 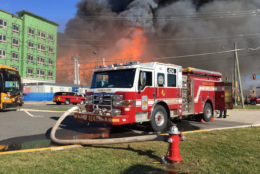 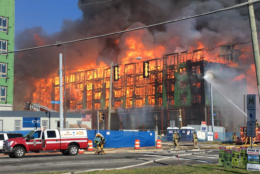 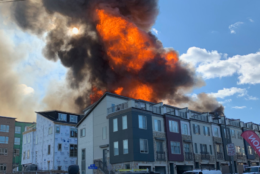 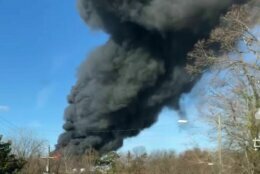 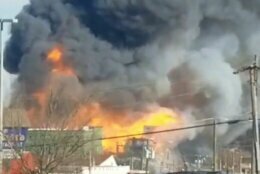 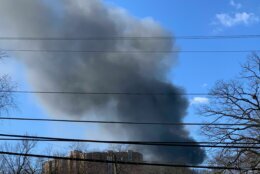 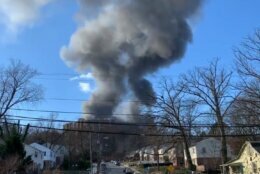 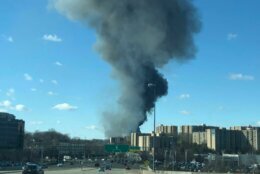 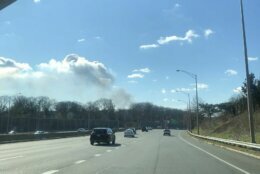 Northern Virginia firefighters have controlled the spread of a fire that is still smoldering at a multi-story construction site just south of the City of Alexandria in Fairfax County.

Fairfax County Fire and Rescue services says about 150 firefighters responded to a rapidly-spreading blaze in a five-story building under construction off North Kings Highway, on the 2800 block of Poag Street.

The fire took nearly eight hours to get under control.

One firefighter suffered second-degree burns and was treated on the scene, according to a fire spokesperson. Another civilian was taken to the hospital with non-life threatening injuries.

The blaze began on the top floor, a Fairfax County fire spokesman told WTOP. The wind conditions made the fire difficult to control.

“It’s not something you see every day, especially here in this area,” said Michelle Mejia, another onlooker. “It was new construction and apparently some propane gas ignited here at the front which ended up spreading from the two story building up to the three story building.”

Units from neighboring Alexandria and Prince George’s County were called to assist with the 5-alarm blaze, whose billowing smoke was visible from the Capital Beltway to across the Potomac River in Maryland.

“Me and my dad came over to see what was going on and all you see was these apartments blazing up,” said Yasmin Ferrufino, an onlooker who has family living at the nearby Kings Gardens Apartments. “You could see the smoke from miles away. It just looked very scary.”

Dominion Energy shut the power off to about 800 customers in the area of the fire early Saturday afternoon as firefighters worked the scene.

The WTOP Traffic Center reported U.S. Route 1 was closed to all traffic between Beacon Hill Road and Huntington Avenue until around 5 p.m. North Kings Highway between School Street and Fairhaven Avenue also opened at around that time.

The location of the fire was on the South Alex site — a mixed-use development from Combined Properties Inc. — that was going to include 400 apartments and other small retail shops centered around the anchor client in German grocery chain Aldi, according to the Washington Business Journal.

The development was to replace the former Penn Daw Shopping Center, which closed in November 2015 and was demolished in phases throughout 2016, clearing the way for construction on the new South Alex development in December 2018, according to Alexandria Living Magazine.

Sri Velamati, the president and CEO of Combined Properties said in a press release:

“We are devastated by the massive fire that has destroyed our South Alex property and threatened nearby homes and buildings. We have long been a part of this community and are deeply committed to rebuilding and fulfilling our commitment to this neighborhood. We are extremely grateful for the firefighters, police and other first responders who have been battling this blaze, and we are cooperating with officials as they try to determine the cause.”

The fire was visible from a camera operated by the Virginia Department of Transportation, which showed some parts of the multi-floor building almost fully engulfed in flames. By 11:30 a.m. — at least an hour after the fire began — images from the scene indicated much of the structure had been destroyed.

Well there’s something you don’t see every day. Happening now in my neighborhood in Alexandria, Virginia pic.twitter.com/vtCB3v0dX1

Storm Team4 meteorologist Matt Ritter notes that a weather-tracking algorithm, used to detect wildfires, picked up the fire on satellite because it was so large. The National Weather Service confirms smoke from the fire grew thick and high enough to appear on Doppler radar, fooling mobile weather apps into thinking it was raining.

For the latest road and traffic conditions, see WTOP’s traffic page or listen to updates every 10 minutes online or on the air at 103.5 FM. Submit photos by tagging @WTOP on Twitter.