The massive fire destroyed what were to be 400 apartments and retail space — as well as 14 nearby town homes — as part of a redevelopment project along U.S. Route 1.
Listen now to WTOP News WTOP.com | Alexa | Google Home | WTOP App | 103.5 FM

A massive fire in Fairfax County, Virginia, over the weekend put a substantial hitch in an area redevelopment plan.

The fire on Saturday off North Kings Highway, on the 2800 block of Poag Street, destroyed what were to be 400 apartments and retail space — as well as 14 nearby town homes — as part of a redevelopment project along U.S. Route 1.

Both the mixed residential/retail buildings and town homes were slated to be completed in summer 2021. But, for now, there is no revised timeline.

“We’re talking at least months’ difference, because the site has been under construction for a long time already to get it to the point we were at when the fire began,” said Fairfax County Chair Jeff McKay.

“I know just to build town homes can take as much as six months from start to finish,” he said. “Obviously, the apartment building is a lot more complicated than that. Crews have been out there working on this building for well over a year already. There’s probably a year’s worth of labor that was lost in a matter of minutes over the weekend.”

But, McKay does not think the fire will change final goals. Property owners he has talked to are eager to get back on track.

“It’s a setback of many months in terms of getting the project delivered,” he said. “But I don’t think it’s a setback at all in the overall goals we have on Route 1, and I am totally confident this development will happen. It’s just going to take a little bit longer than it would have if this horrible incident hadn’t happened.”

The key now, McKay said, is to keep things moving forward as smoothly as possible. To do that, he wants to put together a team of senior county staff to streamline the process for reconstruction.

And, before anything can be rebuilt, McKay said, there still needs to be a demolition, a fire investigation, a foundation inspection and “a whole host of new permitting.”

An investigation into the fire’s cause is underway. A construction worker told a 911 dispatcher it started in a trash chute of the apartment and retail building. It quickly spread to engulf that multibuilding project and 14 town homes under construction behind it.

About 150 firefighters responded to the fire, and it took hours for them to get it under control. 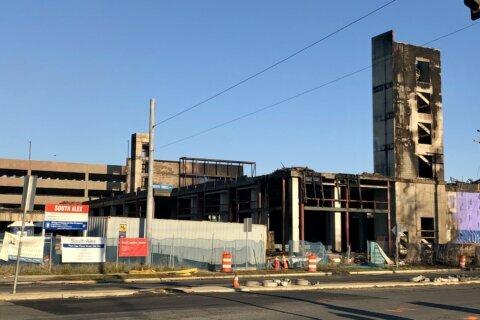 ‘It was so devastating’: Fairfax Co. fire destroys construction site, residents locked out of homes 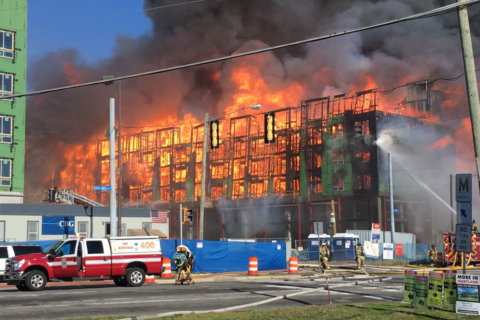