The Act on Addiction Summit on Saturday at Fairfax High School attracted health care professionals, keynote speakers and families interested in talking about, and learning ways to identify those who may be dealing with addiction, with a goal of preventing addiction in the first place.
Listen now to WTOP News WTOP.com | Alexa | Google Home | WTOP App | 103.5 FM

Admiral James ‘Sandy’ Winnefeld was one of the most important military figures in the United States from 2011 to 2015, when he was the vice chairman of the Joint Chiefs of Staff.

But even a man who had access to all kinds of resources could not prevent his son from becoming addicted to opioids just a couple years later. Winnefeld’s son died of a drug overdose during his first semester of college in 2017.

While dealing with the death of his son, Winnefeld went on to help found an organization called Stop the Addiction Fatality Epidemic, known as SAFE.

Winnefeld visited The Act on Addiction Summit on Saturday at Fairfax High School, an event that attracted health care professionals, keynote speakers and families interested in talking about, and learning ways to identify those who may be dealing with addiction and to prevent families from having to deal with addiction in the first place. Northern Virginia health care provider Inova led the summit, while nonprofits like SAFE provided their expertise.

Winnefeld said his mission is to provide awareness for parents and families. 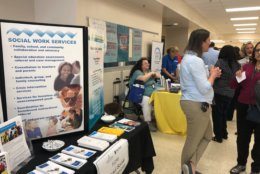 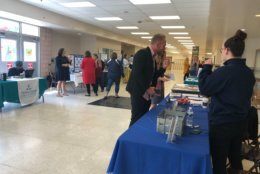 “We could have crawled into a little ball of anger, grief and shame, but we decided to try and put together a nonprofit that would try to help the nation reverse the opioid epidemic,” he said. “We’re trying to prevent families everyday from going through what we went through.”

According to Inova, nearly 20 million adults in the U.S. suffer from addiction. A recent survey conducted in Northern Virginia also found that 65% of adults and 70% of millennials say they know someone who struggles with addiction. The survey also found nearly half of those who responded said they did not know how to help their loved ones struggling with addiction.

“If we knew then what we know now, we would still have our son with us,” said Winnefeld, acknowledging the complexity of substance abuse.

“If we’re talking about it, then we can strategize about how to break down the stigma, the barriers to care and how to bring people back into the productive aspects of our community,” Clark said.

Clark also said everyone can prevent young adults from getting access to prescription drugs, tobacco and alcohol at home. It’s a concerning issue, he said, but the solution he doesn’t require a lot of effort.

The Act on Addiction Campaign is part of a larger $16 million project in Fairfax County focused on recovery and effective treatment for community members in need.