Family, friends and teammates gathered to honor a former George Mason University soccer player and track and field team member who died while kayaking in an Annapolis, Maryland, creek over the summer.
(1/4) 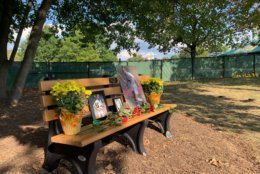 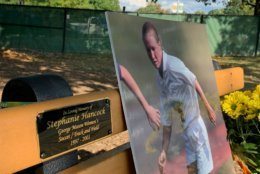 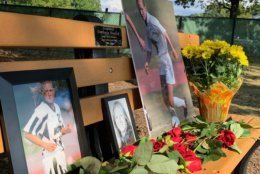 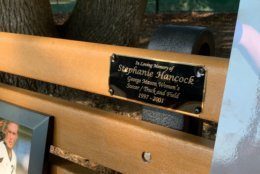 Family, friends and teammates gathered on Sunday to honor a former George Mason University soccer player and track and field team member who died while kayaking in an Annapolis, Maryland, creek over the summer.

Stephanie Hancock drowned while kayaking along Spa Creek on June 29. The Baltimore Sun reported that 39-year-old Hancock and her boyfriend had been on the water in separate kayaks when hers overturned in the area where Spa Creek runs into the Severn River.

She went missing a little before 3:30 that afternoon, and her body was found about six hours later.

Three months after her untimely death, a permanent bench was dedicated at George Mason Stadium in her memory.

Between her matriculation at GMU and before her passing, Hancock racked up years of memories with loved ones and teammates, as well as a 12-year career serving with the United States Secret Service, where she last worked with the Presidential Protective Detail.

“When I found out that she passed, I initially couldn’t believe it,” said Meg Hawkins, a former teammate and roommate of Hancock’s who worked to get the memorial bench installed at the stadium.

“She’s a light. She’s a beacon of light for all of us, and I just didn’t want her memory to be forgotten. So the bench is here for her, for everybody (to) come back, reflect, look at the field … I’m very happy that it all came together and that the (George) Mason Athletic Department let us do that. But now she’s going to be here forever,” Hawkins said.

Hancock is being remembered as a steady teammate who was “always there. It didn’t matter what was going on the field. She was an amazing defender.”

Current members of the women’s soccer team were also on hand for the bench dedication.

“I think that’s just a representation of what it means to be a student athlete at a special place like George Mason because it’s a sense of community,” said Todd Bramble, the current head women’s soccer coach at GMU. While Bramble didn’t know Hancock, he shared details about her life, career and her death with his current team.

“You could tell by the looks on the faces of the players that it had an impact on them,” Bramble said.

Her disposition is another quality that is in the forefront of Hawkins’ memories of Hancock.

“Smiling. She was always smiling and having a good time. She lived life to the fullest,” Hawkins said.

Another former teammate, Shannon Weader saw Hancock as a leader. “Even though she was two years younger than me, I looked up to her as a leader.”

“She was in the U.S. Secret Service and was actually on a detail in Vegas when I was getting married at the same time,” said Hawkins, who was pleasantly surprised when Hancock was able to make the ceremony. “It was a great gift and a great surprise.”

“Meg’s wedding in Vegas was amazing,” Weader recalled. “Steph and I were the only two Mason soccer people to make it out, and it was such a great time … It was just so much fun and probably one of the last times that I really got to hang out with Steph for a long period of time rather than just an hour here or an hour (there) for an alumni event,” Weader said.

Weader said that spending time in Las Vegas was one of the last times that she had really spent a significant time with Hancock. “It was lots of fun.”