After a popular Fairfax County tree was hit by at least two bolts of lightning during a storm last year, it appeared as if its story was ending. But that was not to be.
Listen now to WTOP News WTOP.com | Alexa | Google Home | WTOP App | 103.5 FM

A treasured tree that was struck by lightning outside a Fairfax County, Virginia, nature center is getting a new life.

The 100-foot tall tulip poplar, which was almost 130 years old, used to be a main attraction at Hidden Oaks Nature Center in Annandale. It was the spot where you could see wildlife, such as flying squirrels and birds.

“The tree had a long history of being part of children’s lives,” said Fairfax County Park Authority’s Judy Pedersen. “It had all kind of [feeding] boxes on it, and people would look out the window and get a natural experience.”

After the tree was hit by at least two bolts of lightning during a storm last year, it appeared as if its story was ending.

But that was not to be.

The tree’s 10-foot-tall stump was not damaged, so a fundraising drive was mounted to pay for a chain saw artist to turn it into sculpture.

“The total cost [was] about $6,400. They made more than $10,000 so far, and donations continue to come in,” Pedersen said. The additional money will be spent on children’s programs.

Artist Andrew Mallon collaborated with the parks authority on the design of the sculpture, which features about a dozen different woodland creatures including a fox, a raccoon, owls and a turtle.

Members of the public were invited to “adopt” one of the sculpture’s animals in exchange for a donation.

Mallon’s artistry included the use of chain saws of varying sizes, depending on the level of detail he was going for. Then, he used large and small blowtorches to highlight certain areas before sealing the entire stump.

“The raccoon, I’ll put that little bar on his eyes, I’ll burn it in real dark, and then I’ll sand off the other parts of his body to lighten that up,” he said.

Mallon is a carpenter by trade, and he got into hand whittling with smaller tools. But that took too long. He had seen other people carving with chain saws and decided to try it himself.

That was eight years ago, and he has been a full-time chain saw artist for some three and a half years.

Visitors to the nature center on Monday saw Mallon in action, and there will be other chances to see him transform a stump into a work of art this week.

He is scheduled to finish the work Thursday or Friday. Except on Tuesday, when the nature center is closed to walk-in visitors, you can watch Mallon in action during operating hours. 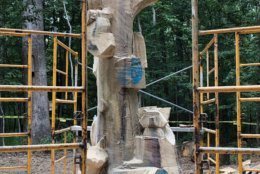 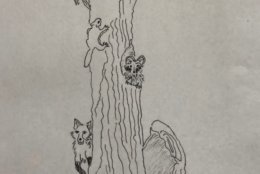 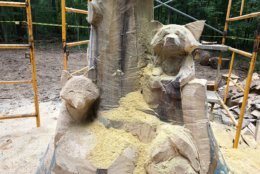 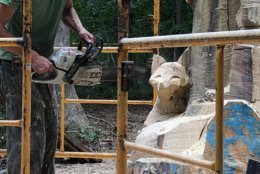