Fairfax Co. police train cute pups for special duties (and there are photos, of course)

Three will eventually become service dogs for retired, disabled first responders. Two will stay on with the department and work as therapy dogs.
(1/4) 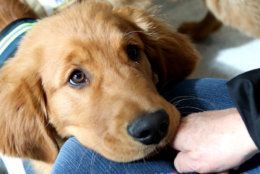 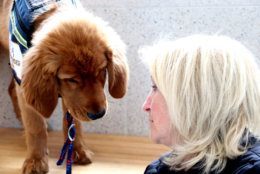 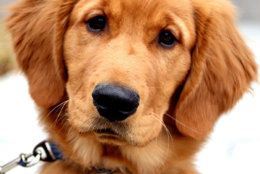 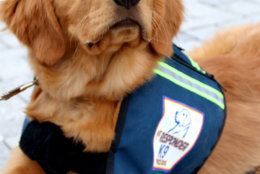 Holmes doesn’t know it, but when he walks into a room, he causes the people around him to release oxytocin, the hormone that has been referred to as the “cuddle chemical.”

And that’s a big part of why Fairfax County, Virginia, police feel he’ll be a big help in their attempts to deal with stress for officers on the job, and for the public at large.

Holmes doesn’t know any of this because he’s just 10 months old.

And because he’s a dog.

Holmes, a golden retriever, is one of five dogs being trained in a pilot program for the Fairfax County Police Department. He and the other four dogs involved in the training were recently introduced to the public during a meet-and-greet event at department headquarters.

Two will stay on with the department and work as therapy dogs, deployed to critical incidents to offer comfort to first responders and to members of the community who are on scene.

Holmes’ handler is Jill Milloy, who is not only a dog owner — she’s raised golden retrievers before — but also a clinical psychologist with the Police Department.

While Holmes is still a puppy and it’s early in his training, Milloy said, he’s already having a positive effect at police headquarters.

“Everybody knows that the dog walks in the room, grown men roll on the floor, everyone’s smiling, everyone wants to pet him,” she said. “It changes the whole dynamic in the room.”

But Milloy said there’s more than just the dogs’ cute fluff factor at work; there’s science involved. “The presence of dogs releases oxytocin, and when you release oxytocin, it interrupts the stress response.”

Having a dog present at a critical incident can make such a difference for the mental health of all those present — not just police, but crime victims and witnesses, too.

“When you’re involved in a critical event, your heart rate is up,” Milloy said. “A high heart rate is one of the variables that’s related to the potential of having a traumatic event stick with you.”

So having a dog who’s trained to offer comfort can make a difference.

“If you can bring down the stress level, we know that a potentially traumatic event is not as likely to stick with you,” Milloy said.

Research, she said, indicates that timing — having immediate access to the presence of dogs when stress is highest — is a big part of the therapeutic effect.