A tornado touched down in Fairfax County, Virginia on Friday evening, bringing down trees and power lines in the Reston area — where severe damage led to a home being condemned.
Listen now to WTOP News WTOP.com | Alexa | Google Home | WTOP App | 103.5 FM
(1/19) 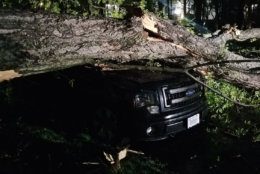 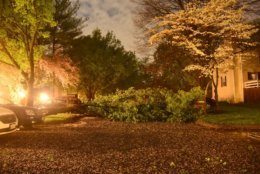 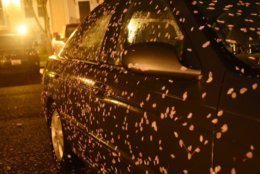 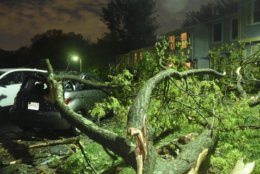 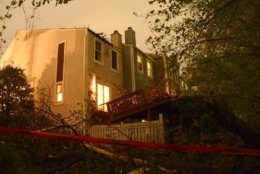 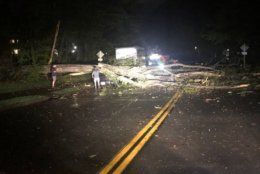 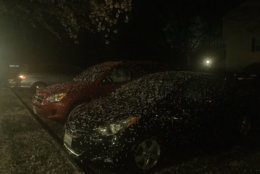 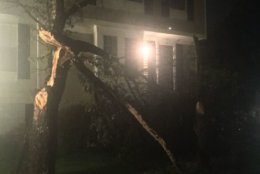 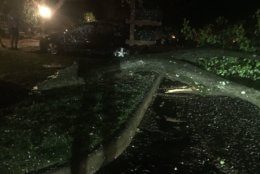 A tornado touched down in Fairfax County, Virginia, on Friday evening, officials confirmed, bringing down trees and power lines in the Reston area — where severe damage led to a home being condemned.

On Saturday, the National Weather Service confirmed that the tornado produced a “discontinuous line of damage” along a 4-mile path for about five minutes shortly before 9 p.m. Friday.

The tornado was rated as an EF0 tornado, which is relatively weak on the Enhanced Fujita scale, which rates tornadoes on their peak intensity. With peak winds of 70 mph and a maximum wind paths of 100 yards, the tornado traveled from north to northeast.

Even though considered weak on the scale, the tornado still left damage in its path.

The first bit of tornado damage was evidenced near Fox Mill Road and Pinecrest Road. Several trees were downed in that area around 8:55 p.m. Friday. Trees were also toppled over along Glade Drive near Rosedown Drive.

After the tornado passed the Dulles toll road and there was minor tree damage between Sunset Hills Road and Baron Cameron Avenue.

Tornado damage was also noted just north of the Reston Hospital Center. A tree was topped over, fencing was blown down and shingles were blown off several townhouses.

The tornado marked its path just east of the Trader Joe’s and destroyed a shed there.  A 2-foot diameter tree crashed through the upper floor of a townhouse on Quietree Drive; the property was condemned.

On Center Harbor Road, a pickup truck was destroyed by a large, 100-foot tall tree while its owner sought shelter indoors, NBC Washington reported. A tree tumbled into a townhouse north of Reston center, dealing enough damage for the building to later be condemned. There were no injuries reported.

Around 9 pm last night, crews dispatched to Center Harbor Rd between Reston Pkwy and North Village Rd for large tree that fell on a parked pick truck. Fortunately no one was in vehicle. Tree completely blocked street so crews used chainsaws to cut up tree to open road up. #FCFRD pic.twitter.com/YW2haaHeqn

Michael Moore made a trip out to his son’s home in the Whisper Hill neighborhood Saturday to check on the damage to the property. His son and grandchild were away from their property when the tornado ripped through the neighborhood.

“I’m not sure about up on the roof, but there’s all this light debris around …” Moore said. “Storms are storms, when they come you’ve gotta take them.”

The most significant damage occurred in the vicinity of Lake Newport near North Point Village Center, WTOP’s Dave Dildine observed, mostly in the form of widespread tree damage. A resident of Reston’s Whisper Hill neighborhood described hearing a loud roar while their home shook, amid torrential rain and the sound of pebbles pounding against the building’s walls.

Dominion Energy reported about 200 customers were still without power as of 6:00 p.m. Saturday, down from 2,500 just before midnight.

Forecasters had issued a tornado warning for the area just before 9 p.m. on Friday, when Doppler radar from nearby Sterling indicated rotation within a storm moving northward between the Reston and Fairfax County parkways.

Hofmann said survey teams found trees fallen in a pattern suggestive of winds in a “swirling motion,” evidence which helped them prove that a tornado was responsible.

“We’ve determined that the damage pattern was convergent, meaning the trees and debris that were blown around were blown towards each other in a swirling motion,” Hofmann said. “That corroborates and agrees with what we saw on radar here, which suggested rotating winds which would be a tornado.”

Elsewhere in Virginia, the weather service also confirmed tornado touchdowns in Fredericks Hall, Barham and Forksville. Several trees were reported down in Barham, while a house and various small structures were damaged in Forksville.

Factoring in Friday’s outbreak, NWS offices in Raleigh and Blacksburg have issued more tornado warnings in 2019 across central Virginia and North Carolina than all of Oklahoma and Kansas.

Officials also confirmed that 14 tornadoes touched down in Mississippi as severe storms made their way across the South on Friday, killing an 8-year-old girl in Florida. The strongest tornado had winds as high as 132 mph, when it hit a neighborhood in the central Mississippi town of Morton, damaging numerous homes. 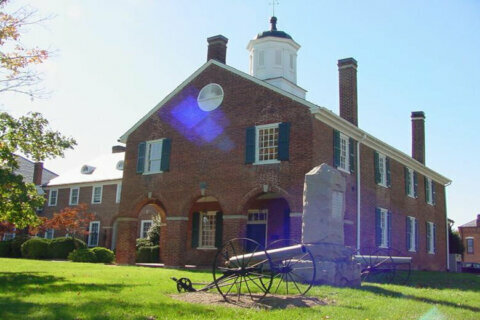