A man who police have been looking for since last Saturday has been linked to several crimes that happened Wednesday, Fairfax County police said.
Listen now to WTOP News WTOP.com | Alexa | Google Home | WTOP App | 103.5 FM

WASHINGTON — A man who police have been looking for since last Saturday has been linked to several crimes that happened Wednesday, Fairfax County police said.

Police responded to reports of crimes around the Alexandria area, and they said that 32-year-old Alton Thodos is the suspect.

At 10 a.m., police responded to a report of a man trying to open car doors in the area of Belle Haven Road and Radcliffe Lane. They found that several cars had been rummaged through, and loose change and small items were missing from them.

A suspect matching Thodos’ description left the area in a 2012 Subaru Outback that was reported stolen in Arlington County.

A resident on the 3100 block of Burgundy Road reported seeing a man police believe was Thodos getting into a 2018 Nissan Rogue and driving away around 2 p.m. Thodos sneaked into a home while the resident was inside and stole the car keys, police said.

At 3:45 p.m., police looking for the stolen Subaru found a 2007 Nissan Titan from D.C. in the area of Heritage Hill and Lawson’s Hill Court. Police believe Thodos stole the Nissan.

Thodos evaded arrest last Saturday at the Virginia Lodge Motel on Richmond Highway, when police came with a warrant. He climbed through the ceiling and into an attic, and escaped through another part of the building.

Police ask anyone with information about Thodos to call 703-691-2131. He is considered dangerous. 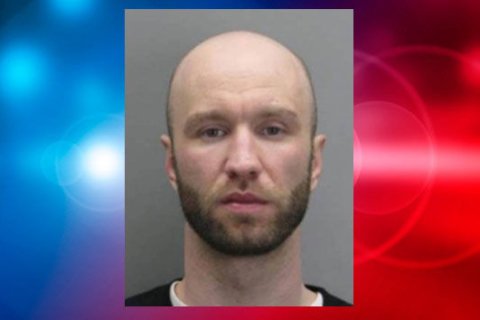