A Navy destroyer and a town in Fairfax County, Virginia, share a name that links them to D-Day. And because of that connection, a local high school marching band has been invited to participate in next year's commemoration in France.
Listen now to WTOP News WTOP.com | Alexa | Google Home | WTOP App | 103.5 FM

WASHINGTON — The town of Herndon, Virginia, has a unique connection to the D-Day Allied invasion of Western Europe that helped to end Word War II. The USS Herndon was ahead of the first wave of assaults on Omaha Beach on June 6,1944.

Nicknamed the “Lucky” Herndon, the Gleaves Class destroyer bombed enemy targets onshore and escaped the D-Day advance unscathed, while other ships were hit with enemy artillery, mines and bombs.

Both the Navy destroyer and the Virginia town were named after William Lewis Herndon, a Naval commander who went down with his ship: The SS Central America sank in 1857 with about $2 million in gold on board from the California gold rush.

Now, Herndon High School’s marching band has been invited to participate in the 75th commemoration of D-Day in Normandy, France, next year. 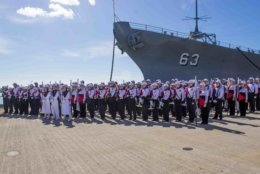 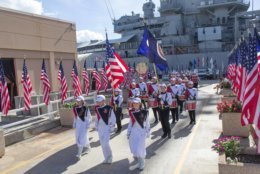 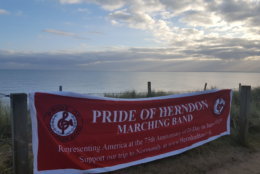 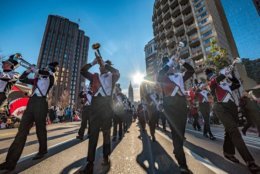 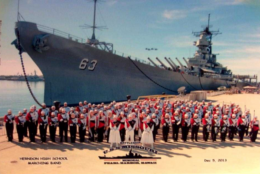 “Being selected to represent the United States is an honor beyond measure — one that our students, school and community will treasure for years to come,” Herndon High School band director Kathleen Jacoby said.

The band’s previous high-profile appearances include the National Cherry Blossom Festival Parade in D.C., the Pearl Harbor Memorial Parade in Hawaii, and Electrical Parade at Disney World in Orlando.

Work is underway now to raise money for the next big trip — to France.

“I’ve got about 60 current and alum Herndon High School musicians from all different wings of the music department — from the orchestra, from the choir, from the guitar program and from the band program — all coming together, putting on a huge concert trying to raise money for the trip,” Reeves said.

The band’s invitation to perform in France has been a learning opportunity for many people in the town who were unaware of the town’s historic link to D-Day, Reeves said. Some have come forward with stories and memorabilia from family members who served on the USS Herndon.

“One of the coolest things that we came across was someone had the American flag that flew on the USS Herndon on that day, on D-Day,” Reeves said.

Jacoby said students and staff have been learning about the specific men and, in many cases, direct relatives, who were a part of Operation Overlord.

When the band participates in D-Day’s 75th anniversary parade, Reeves said each student will carry the photo of a sailor whose life they’ve researched.

“And, they’ll be honoring them when they march in the parade,” Reeves said. “This generation of people who fought in the world war is not forgotten. Even today’s students remember them and we pay our honor and homage to them.”