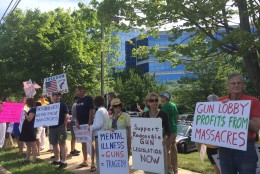 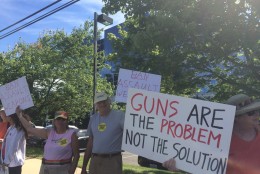 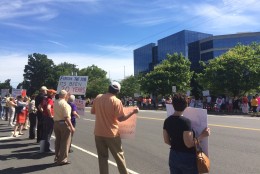 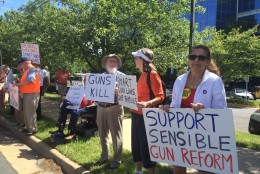 “There’s no reason anyone needs an assault rifle or a high-capacity magazine,” said protester Mike Bento.

“Assault weapons that are made for the military should definitely not be purchased,” said demonstrator Ottilia Calhoun.

The Sunday morning attack at Pulse, a nightclub in Orlando, was the worst mass shooting in U.S. history. Federal authorities are still investigating the background and motive of the 29-year-old shooter, Omar Mateen.

“I would like to see some more sensible gun laws,” protester Bill Pratt said.

The NRA went on the defensive, responding on Twitter to calls for stricter gun control.

“Law-abiding gun owners are done with being blamed for the acts of madmen and terrorists,” tweeted Chris Cox, executive director of the National Rifle Association Institute for Legislative Action, the lobbying arm of the NRA.

“To suggest that all we need is a new ban on ‘assault weapons’ provides nothing but a dangerous sense of false security,” he wrote. “We must defeat radical terrorists, but not resort to destroying the rights of law-abiding Americans to defend themselves.”