ATHENS, Greece (AP) — A court in central Greece has overturned a ruling that authorized the confiscation of crude oil from an Iranian-flagged tanker at the center of a volatile dispute over international sanctions.

Greek and Iranian officials confirmed Thursday that an appeals court in the port city of Halkida reversed a lower court’s decision to allow the removal of the Lana’s cargo. Greek authorities temporarily seized the tanker in mid-April.

“By God’s grace, the entire oil shipment will be returned,” the Iranian Embassy in Athens said in a statement posted on social media after the court issued its ruling.

“The issue remains the subject of intense consultations between the two countries to ensure full implementation of the ruling,” the embassy said.

A Greek official said last month that the Iranian tanker’s cargo was being transferred to another vessel following a request from the United States. Greek media reported that the Lana was believed to be carrying more than 100,000 tons of Iranian crude, in breach of United States and European Union sanctions on Iran.

Iran had fiercely protested the action and last month ordered the armed takeover of two Greek-flagged tankers in the Persian Gulf. The Greek Foreign Ministry branded the seizure of the tankers as “tantamount to piracy.”

“The action taken was completely unjustified and unprovoked. We’ve said that from the first moment,” Greek government spokesman Giannis Oikonomou said. He said the “justice system in our country operates independently, and this has been demonstrated on multiple occasions.”

Greek authorities seized the Lana when it anchored off Karystos on April 15. At the time, it was flying a Russian flag, had recently changed its name from Pegas to Lana, and was carrying a crew of 19 Russians.

Greece’s coast guard said the tanker was seized due to suspicions it had breached EU sanctions imposed against Russia over the war in Ukraine. 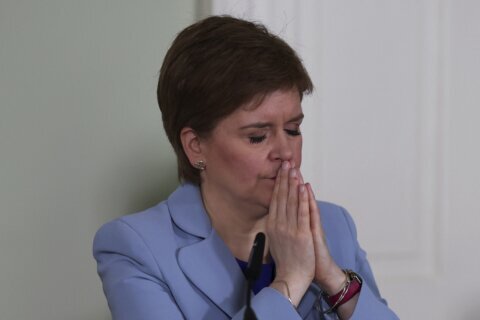 NATO summit to open as leader warns of ‘dangerous’ world