Review: ‘Glass Onion: A Knives Out Mystery’ is preposterous fun — no more, no less

In 2019, Rian Johnson’s twisty-turny “Knives Out” became a surprise mainstream hit, infusing fresh creativity into the whodunit genre with a candy-colored “Clue” mystery.

Now, the sequel “Glass Onion” has become the No. 1 movie on Netflix since it dropped over Christmas weekend, providing folks some delicious detective work over the holidays.

Fans are hailing the movie as a cleverly-written Oscar contender for Best Picture and Best Adapted Screenplay, while detractors (let’s call them Elon Musketeers) are entering with their knives out, ready to pick it apart for satirizing the tech mogul. I shrug at both takes, peeling “Glass Onion” as a fun puzzle box that’s preposterous fun — no more, no less.

The film once again follows brilliant Detective Benoit Blanc (Daniel Craig), who receives a mysterious wooden-box gadget from tech billionaire Miles Bron (Edward Norton). You see, Bron has invited a group of his friends and frenemies to his remote island for a murder mystery party, but when actual bodies drop, the investigation takes on life-or-death stakes.

It’s wonderful that Craig has found a new recurring role as Blanc, giving him a post-Bond franchise after retiring his 007 in “No Time to Die” (2021). He delightfully joins a long line of British film detectives from Basil Rathbone as Sherlock Holmes to Peter Sellers as Inspector Clouseau to Albert Finney as Hercule Poirot, a role revived by Kenneth Branagh.

In “Glass Onion,” his character’s gay marriage to stay-at-home hubby Hugh Grant is handled with admirable matter of factness (a 93% audience rating on Rotten Tomatoes offers hope that most folks aren’t homophobic), but Craig’s attempt at a Southern accent is awfully reminiscent of Kevin Spacey’s Frank Underwood in “House of Cards” (2013).

Craig is surrounded by a stellar ensemble: Dave Bautista plays a gun-toting Twitch star filming from his mom’s basement; Kate Hudson is a “canceled” fashion designer who complains of wokeness but thinks sweatshops make sweatpants; Kathryn Hahn is the ambitious Governor of Connecticut; and Leslie Odom Jr. is a scientist at Bron’s company.

SPOILER ALERT: I’m about to discuss spoilers below, so only read after watching.

Turns out, they all owe Bron a debt for past favors, dating back to the night that his tech company design was drawn on a bar napkin. Enter Janelle Monáe, who steals the show as his ex-business partner, wearing sunglasses to hide her suspicious glances. Even Bron, played by a deliciously scheming Ed Norton, looks surprised to see her on the island.

Like Jordan Peele’s “Us” (2019), Monáe deserves credit for dual roles as twins Helen and Andi Brand. However, as a twin myself, I find the “secret twin sister” plot device to be way too convenient. It was original when Claudette Colbert did it in Preston Sturges’ screwball comedy “The Palm Beach Story” (1942), but 80 years later, it feels like a cheap twist.

To maintain credibility with audiences, a writer really should establish twin characters right from the start, like Jeremy Irons in “Dead Ringers” (1988) or Nicolas Cage in “Adaptation” (2002). Otherwise, it feels like the screenwriter pulling a fast one that’s not really earned, a sneaky “gotcha” attempt that weakens practically everything we’ve seen up until that point.

You could say this about much of “Glass Onion,” as Johnson repeatedly yanks the rug out to mixed results. I’ll admit that he can play audiences like a fiddle as the sharply talented filmmaker of “Brick” (2005), “Looper” (2012) and episodes of “Breaking Bad” (2010-2013) before killing off Luke Skywalker in the controversial “Star Wars: The Last Jedi” (2017).

His final signature on this “Glass Onion” painting is to destroy the Mona Lisa, which succeeds in making Norton’s villain go down in infamy but unintentionally makes Monáe’s heroine unlikable. Surely, Bron blowing up his island mansion with his own experimental energy would have been embarrassing enough without destroying da Vinci’s priceless art.

I guess you could call the film “pop art,” but it’s nowhere near as profound as its fans think it is, nor is it as egregious as its detractors claim. It’s not great. It’s not trash. It’s fine, an entertaining ride that probably doesn’t deserve to be nominated for Best Picture over “The Woman King,” “Triangle of Sadness” or “RRR,” though that situation is sadly looking likely.

Oh well, at least it would be an excuse to nominate something people actually watched this year, bringing popcorn pictures back to the Oscars race, which is long overdue. I’m happy for Johnson, I’m happy for his fans, but for me, “Glass Onion” was a blast until it wasn’t.

The reveal doesn’t work, but it’s a lot of fun getting there. 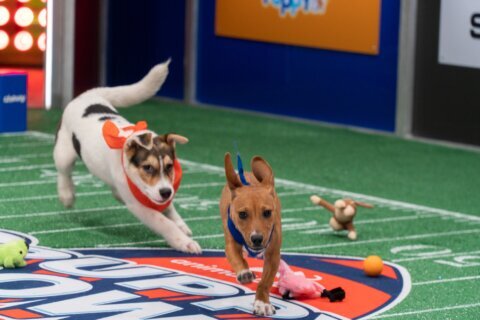 Puppy Bowl XIX: How to watch the other big game

Celebrity birthdays for the week of Feb. 5-11